Video produced by UK Public Relations and Strategic Communication and Marketing and Brand Strategy. To view captions for this video, push play and click on the CC icon in the bottom right hand corner of the screen. If using a mobile device, click on the "thought bubble" in the same area.

LEXINGTON, Ky. (Oct. 13, 2022) — University of Kentucky alumnus Eugene Poole Jr., a 2020 inductee into the UK Alumni Association's Hall of Distinguished Alumni, has three words of advice — "stick to it."

This motto would carry the Hopkinsville, Kentucky native to Washington, D.C., to take on leadership of the U.S. Capitol Dome Restoration project.

Poole’s interest in architecture started at an early age and led him to the UK College of Architecture (now UK College of Design). While at UK, he joined the ROTC program and graduated straight into the Air Force.

“Once I graduated from the University of Kentucky in 1985, I was immediately thrust into the Air Force as a second lieutenant,” Poole said. “My first assignment was in the South at the Keesler Air Force Base where I became a project manager for ongoing projects.”

His service took him throughout the U.S. and overseas to Guam, Japan, Korea, Saipan, England and Germany and afforded him many opportunities.

“The Air Force afforded me the opportunity to be in charge of the design process and to be able to oversee the construction process right off the bat,” he said. “That was a huge blue chip to help me in my career going forward.”

After many years of military and private industry work,  Poole was alerted to a job opening in Washington, D.C., — a job that would make him the architect of the capitol.

“My indoctrination to working in D.C. and the very first project I received was the restoration of the United States Capitol Dome Restoration Project,” Poole said. “This was a full-on rehabilitation of the rotunda, the outer dome, the inner dome and the interstitial space between the inner and outer dome. I was given a stack of books and I came to work every day to read and understand the documents and what the project was all about.”

Since then, Poole has done three presidential inaugurals, has worked on the Supreme Court Building, senate and office buildings, Library of Congress Botanic Gardens and serves as the jurisdiction executive for the U.S. Capitol.

“In 1985 when I was in college at UK, if anyone were to have told me that I would become the project manager for the iconic Dome Restoration project and be the jurisdiction executive for the U.S. Capitol building, I would have laughed and said, 'No way,'” Poole said. “But here I am, and it’s simply awesome!"

Along with the Air Force, Poole credits UK for his success and encourages current students to "stick to it."

“I give credit to my being successful there not only to my Air Force experiences, but the underpinnings of what the University of Kentucky instilled and taught me.”

Poole has this advice for current Wildcats:

Learn more about Poole in the video above. 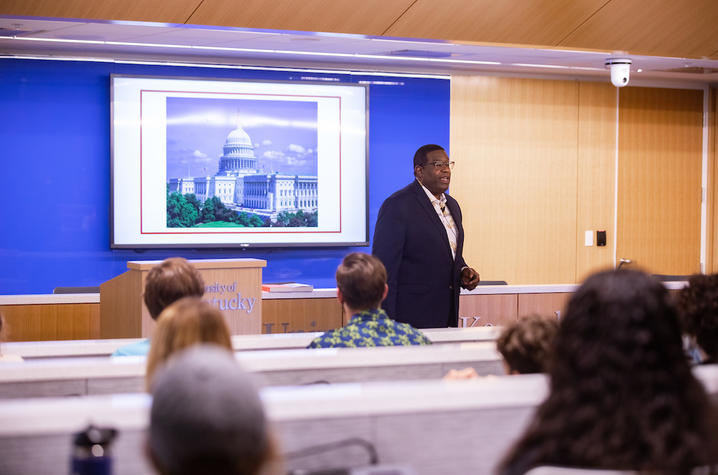