Video produced by UK Public Relations and Strategic Communications and Marketing and Brand Strategy. To view captions for this video, push play and click on the CC icon in the bottom right-hand corner of the screen. If using a mobile device, click on the "thought bubble" in the same area.

Meryum Siddiqi envisioned being dressed in a blue cap and gown while proudly walking across the Rupp Arena stage — putting one foot in front of the other until her outstretched hand reached that coveted diploma. There would be family members giving warm hugs without warning and genuine smiles being captured in countless photos.

But those congratulatory gestures never came.

But little did she know, days would turn into weeks, weeks would turn into months. The world as we once knew it drastically changed. The definition of normal disappeared — and so did Siddiqi’s plans for her final semester.

She was left with questions, anxieties and fears about what the future would hold. So, Siddiqi decided to channel her energy into schoolwork.

“In April, UK was offering remote learning devices for students,” she said. “Since I was already at home, I thought I would focus even more on school, so I requested the iPad. And that was the beginning of the unexpected.”

The University of Kentucky strives to integrate technology in a way that supports students.

A joint venture between Student Success and the EVPFA/IT offices, Smart Campus is an incubator for entrepreneurial ideas on how best to prepare students in new modes of thinking and contributing.

With those goals in mind, the Smart Campus iPad initiative was launched in 2019. As a result, more than 19,000 UK-issued iPads are being used by sophomores, juniors, seniors, faculty and staff.

“The iPad initiative is about equalizing the playing field so all students have access to state of the art technology,” Kirsten Turner, vice president for Student Success said. “Our students deserve to be the drivers of society — the Commonwealth needs a workforce and educated citizenry pushing at the edges of knowledge to solve the most intractable problems.”

During the pandemic, UK wanted to expand upon efforts to use technology to maximize learning and support for students.

It was an unprecedented transition — creating a “reimagined normal” for an entire campus community. But together, faculty, staff and students rose to the challenge. And technology was at the center of creating solutions.

Almost overnight, Zoom went from being a somewhat niche platform to propping up the entirety of UK’s institutional operations, along with other enterprise technologies.

To help students with the transition, UK offered iPads to those who didn’t have access to technology to complete schoolwork at home.

“This initiative enabled the university to adapt during the COVID-19 pandemic, and Meryum Siddiqi’s story is a perfect example of why we continue to invest in technology for our students,” Rosa Crisantos, an ITS specialist who helps lead the Smart Campus Initiative, “In today’s interconnected world, students need technology to thrive. By putting these iPads in their hands, we are bridging the technology gap and ensuring they have the tools to succeed during their college careers and after leaving campus.”

Siddiqi viewed the iPad as a faint silver lining during a dark time. But it quickly turned into much more.

“Over the next two months, I was filling my time with creating tons of designs,” she said.

Designs of daises, trees and rainbows in soothing pastels began to fill Siddiqi’s iPad. While confined to her house, Siddiqi’s creativity was unlocked and continued to blossom.

“I really draw from things in nature — florals, rainbows, the sky — because nature reflects authenticity,” she explained. “But I find a way to make it bright and colorful, because that’s what draws people in.”

This is where Siddiqi leaned in on the knowledge and skills she gained during her time at UK.

Not long after Siddiqi began doodling on her iPad, her designs came to life on glass cups, notepads, stickers, totes and more. “It wasn’t a business at first, but my friends became interested,” she said.

Siddiqi’s designs became products, and her products became a business — complete with a website, social media presence and a mission.

“My vision became creating and sharing designs and products that would make people smile — even if just for a moment.”

Meryum Designs went viral — gaining thousands and thousands of followers on Instagram. Orders also came flooding in. The designs that brought a smile to Siddiqi’s face had done the same for others.

“It’s kind of crazy. I never expected drawing designs on my iPad to turn into an entire business.”

But when she reflects on those months in 2020, Siddiqi thinks of the business she created. Though small, it continues to have a large impact on her outlook on life and on others.

Now, Siddiqi is encouraging fellow students to embrace the unexpected.

“UK giving these iPads to students is such a big investment in us,” she said. “If your someone who thinks outside of the box — which UK encourages us to do — you should explore the opportunities available to you through resources.” 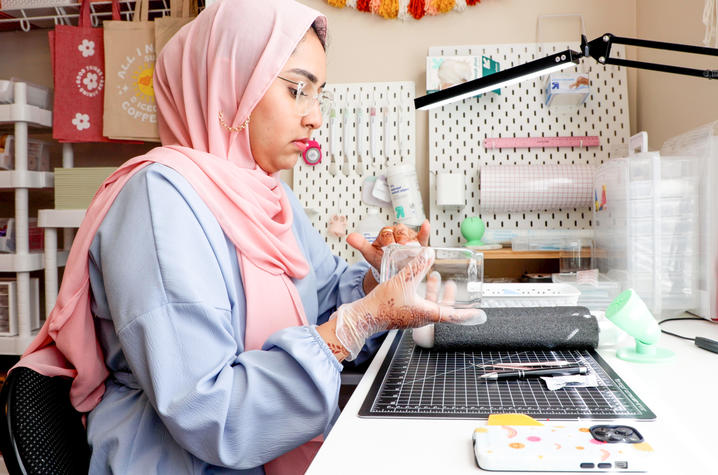 Meryum Siddiqi’s designs became products, and her products became a business — complete with a website, social media presence and a mission.

At the University of Kentucky, students are at the center of all that we do. From the moment you become a Wildcat through graduation and beyond, the Office for Student Success is committed to supporting you. Comprised of five areas and 25 units, together, they have one vision — to help students live a life of meaning. Student Success works through an equitable, holistic and inclusive lens to design and deliver unparalleled services and support a diverse community of learners in achieving their wildest ambitions. In the Office for Student Success this is what we do — this is who we are. You can explore resources available to you here. If you have additional questions, you can reach a Student Success team member by calling the helpline 859-218-YouK (9685).