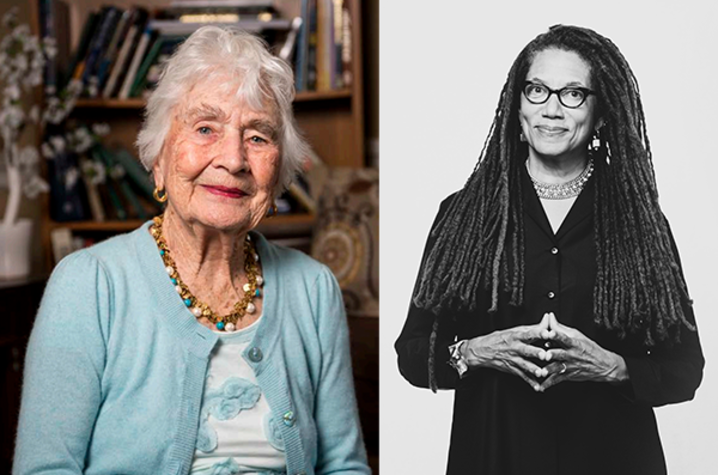 LEXINGTON, Ky. (Dec. 13, 2022) — The University of Kentucky Board of Trustees has approved honorary degrees for two citizens who have distinguished themselves in their careers and community service. The recipients are Virginia Marsh Bell and Nikky Finney.

Bell and Finny will receive their honorary doctorates at the UK December 2022 Commencement Ceremonies this Friday, Dec. 16. They will be presented with their degrees at the following ceremony times:

Both ceremonies will take place at Rupp Arena at Central Bank Center in Lexington.

Virginia Marsh Bell to receive Honorary Doctor of Humane Letters. Born in Harrison County, Kentucky in 1922, Virginia Bell was raised on a subsistence farm as the second of seven children. She earned a bachelor’s degree in math and biology at Transylvania University in 1944.

Bell and her husband moved to Nashville, Tennessee, where they raised five children. The family returned to Lexington in 1974 when her husband accepted the presidency of the Lexington Theological Seminary. At that same time, Bell’s parents, still living on the farm outside of Cynthiana, started experiencing the challenges of aging, allowing Bell to witness firsthand how care was provided for older adults. These experiences, plus earlier life exposures to how persons with dementia were being shuttered in psychiatric units, ignited her commitment to do something more for aging adults, particularly those with dementia and their families.

At age 60, Bell earned a Master of Social Work at UK, began her second career at UK’s Sanders-Brown Center on Aging and created the Best Friends Approach to dementia care, a model adopted by care facilities, nursing homes and day treatment centers around the world. While acknowledging the medical and psychological challenges of dementia, the Best Friends Approach emphasizes and respects the humanity of people with dementia and focuses on relationship-centered care. Understanding that each person has a life history, identity and talents, the Best Friends Approach embraces the human need for connection through interpersonal interaction, activity, dignity and respect.

The approach, and Bell herself, have received numerous honors, grants and awards, including recognition by the Robert Wood Johnson Foundation, the National Council on Aging and the American Society on Aging. Bell twice has served on the Kentucky Governor’s Task Force on Alzheimer’s Disease; she received UK’s Sullivan Award in 2004; she was inducted into the UK Social Work Hall of Fame (2010) and she received the UK Alumni Association Hall of Distinguished Alumni Award (2010).

While she officially retired in 1993, Bell remains a constant mentor to the Best Friends program, conducting training for volunteers, attending activities at day centers, traveling throughout the world to help establish new programs and serving as a keynote speaker at national and international conferences. Around the time of her 100th birthday in June 2022, Bell addressed a global meeting on Alzheimer’s disease, continuing her efforts to recognize that beneath the challenges of dementia lies a person of value with a past, present and future.

Nikky Finney to receive Honorary Doctor of Humanities. Renowned poet and professor Nikky Finney has spent her career illuminating the Southern cultural and political heritage of Black Americans in ways that resonate throughout the country and the world.

Finney’s love of writing and poetry began during her childhood in South Carolina. She heeded this calling by earning her bachelor’s degree in English literature at Talladega College in 1979. The influence of the Civil Rights and Black Arts Movements, and her parents’ social activism, led her to pursue additional education in African American studies at Atlanta University. In her career of more than 30 years, Finney has written six books and hundreds of poems and essays that explore and confront the experiences that have shaped life in the South for herself and countless other Black Americans. Her most recent book, “Love Child’s Hotbed of Occasional Poetry,” is an enduring love song to her father and 400 years of Black American fight and ingenuity.

Finney’s work has attracted awards from organizations across the country, including the PEN American Open Book Award in 1999 and the Benjamin Franklin Award for Poetry in 2004; several awards from the Kentucky Arts Council and Kentucky Foundation for Women; the Aiken-Taylor Award from the Sewanee Review and the University of the South; the Wallace Stevens Award, given annually by the Academy of American Poets to recognize outstanding and proven mastery in the art of poetry; and most famously, the National Book Award for Poetry for her 2011 book “Head Off & Split.”

The university has been influenced by Finney since 1989, when she first came as a visiting writer, and then served as a professor for more than 20 years within the departments of English, Creative Writing and African American Studies. In 1991, Finny co-founded the Affrilachian Poets in UK’s Martin Luther King Jr. Cultural Center, to elevate voices and faces of the Appalachian region that had previously gone unrecognized by the world at large.

For more information about the December 2022 Commencement Ceremonies, visit https://commencement.uky.edu.