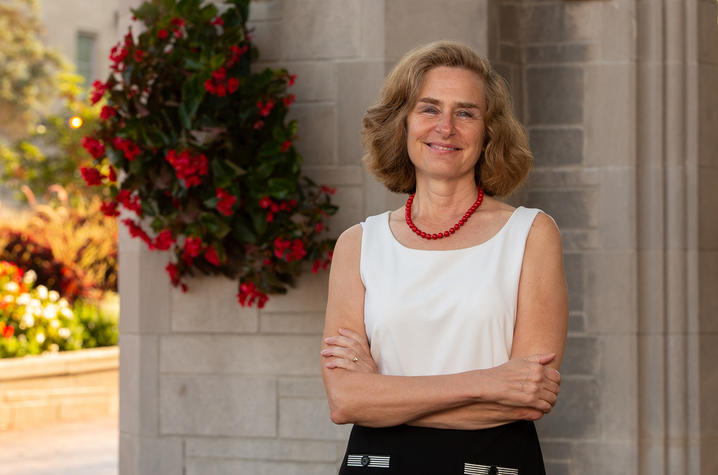 LEXINGTON, Ky. (March 22, 2022) — Aiming to “move the needle” within the Big Ten, one University of Kentucky College of Communication and Information alumna is taking the helm and bringing a fresh perspective to her university.

Pamela Whitten, who earned a master’s in communication from UK in 1986, is making history as the first female president of Indiana University. Though she never dreamed of having this title since female presidents weren’t common when she was growing up, she’s glad to be in a position to make a difference.

“I think that many people like me never thought about or planned or aspired to be a university president,” Whitten said. “I think what happens is as you are in the role as a faculty member and you begin to assume more service-type responsibilities and you gain great satisfaction out of that, you begin to realize that you’re driven to tend to move the needle at an institution. And then from that, you move into these formal leadership roles.”

Whitten’s road to becoming the highest-ranking officer within IU’s academic administration began when she started her Ph.D. program at the University of Kansas, nearly a decade after graduating from UK and working in corporate communications. As a CI student, she had known that she would eventually pursue her doctorate after getting a glimpse at Ph.D. courses. At 30, with a five-year-old and a newborn, Whitten earned her doctorate and began a string of public university leadership roles.

From 1995-98, she served as the inaugural director of information technology services at the University of Kansas Medical Center as well as a research and assistant professor in the Department of Family Medicine. She then moved her family to Michigan to begin a traditional college professorship at Michigan State University. Between 1998 and 2014, she took on several positions and promotions, from assistant professor and research fellow to dean of the College of Communication Arts and Sciences. In 2005, she also had a one-year stint as a professor at Purdue University in addition to her MSU duties. From 2014-18, she served as vice president for academic affairs and provost at the University of Georgia.

Once her tenure as a UGA provost was over, Whitten transitioned into her most senior roles. From 2018 to early 2021, she was president of Kennesaw State University, a large, urban university in Georgia.

The scope of KSU helped ease Whitten’s 2021 transition to the even bigger university that IU is. IU has seven campuses and two regional centers. Its flagship campus, IU-Bloomington, is an R1 research institute, meaning their research activity is classified as very high, while the IUPUI campus is R2, with research classified as high. The university also boasts over 90,000 students and the largest medical school in the country.

As IU’s 19th president, Whitten is one of only five women among the 14 presidents making up the Big Ten’s Council of Presidents and Chancellors. Along with representing her university on the world stage, she has a broad range of responsibilities, including ensuring a positive student experience, attending to all fiscal matters, heading up community outreach, handling relationships with government entities and more. However, although she is the leader on campus, she knows she can’t tackle everything by herself.

“It’s such an important part of being successful as a leader, surrounding yourself with people that are smarter than you that can help formulate and then implement your vision,” she said.

Although she’s less than a year into her presidency at IU, Whitten has found the experience thus far to be engaging and exciting. Being at IU for her is like combining her previous university jobs into one. And despite this not being her first time in the top spot, her ultimate goal has stayed as simple as ever — to serve the community in which she leads.

“In the end, it’s all about the success of students, ensuring that we do things to enhance their success and experience,” Whitten said, “and also facilitating the environment of the faculty so they are able to be successful in their scholarship, and that we serve the state well.”