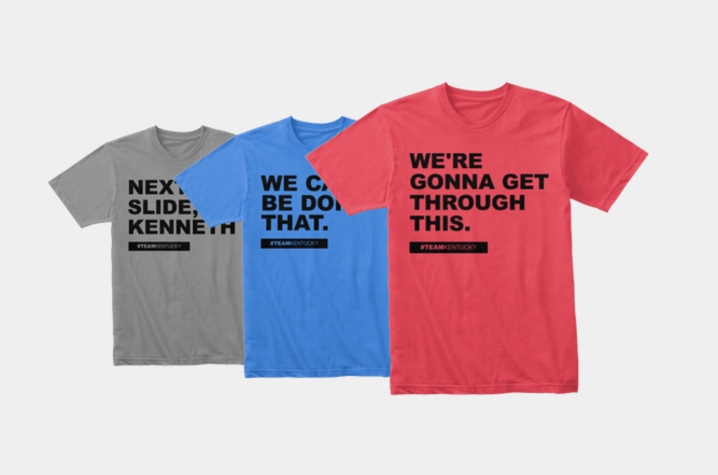 Examples of merchandise with quotes from Beshear from his daily COVID-19 briefings.

Together, Stites and Walker have launched a website selling Beshear-themed merchandise called “Beshear Gear,” a COVID-19 fundraiser that donates 100% of the proceeds to the Team Kentucky fund, supporting those financially impacted by the pandemic.

So far, “Beshear Gear” has raised over $85,000 for the Team Kentucky fund and has even received praise from Beshear himself, who thanked Stites and Walker for their donation during one of his daily briefings. In fact, “Beshear Gear” has been so successful, the merchandise’s online printer, Teespring.com, has donated an additional $5,000 toward the Team Kentucky fund.

When the coronavirus started affecting Kentucky, Beshear began a daily livestream update of the virus’ impact on the state. Noticing how the governor’s daily briefings had begun to pick up in popularity, the two friends had the idea to make shirts and stickers with the his most popular phrases to sell and donate to the Team Kentucky fund. Stites and Walker began promoting “Beshear Gear” on their respective social media platforms and in the “Andy Beshear Memes for Social Distancing Teens” Facebook group in the hopes of raising around $1,000. But, demand greatly exceeded their expectations.

“It’s been extremely gratifying to see how much people love the shirts and other merchandise, and having the support of my friends and family who have also been sharing the site online and buying merchandise,” Stites said. “To have had a hand in something that has brought some humor and a sense of unity during such a crazy-hard time in all our lives, not to mention the financial aid the fundraiser is providing to the Team Kentucky fund, has been really nice.”

According to Stites, the website has reached beyond any of her expectations. “I could never have imagined our little site would have been this successful. $85,000 in three weeks, and still counting!” she said.

Among the phrases used on the merchandise is one very familiar to viewers of Beshear’s daily update: “We’re gonna get through this.”

Anyone interested in purchasing Beshear gear can visit www.besheargear.com. To donate directly to the Team Kentucky fund, visit https://secure.kentucky.gov/formservices/PPC/KYCOVID-19Donate