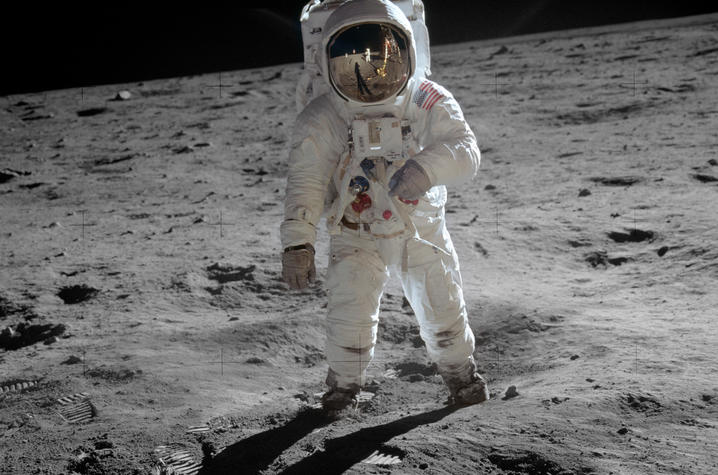 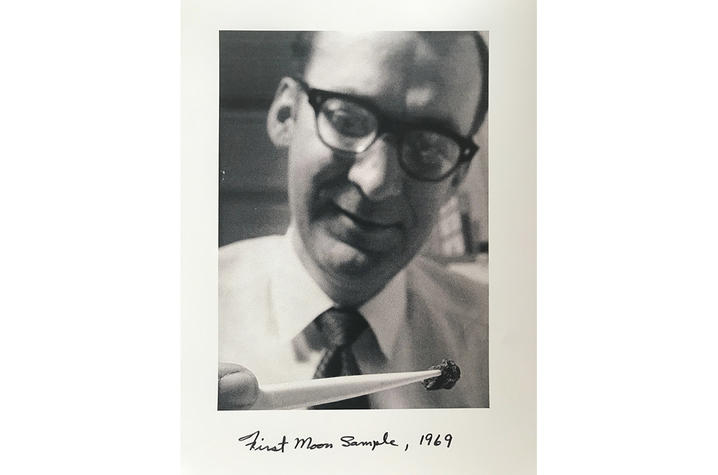 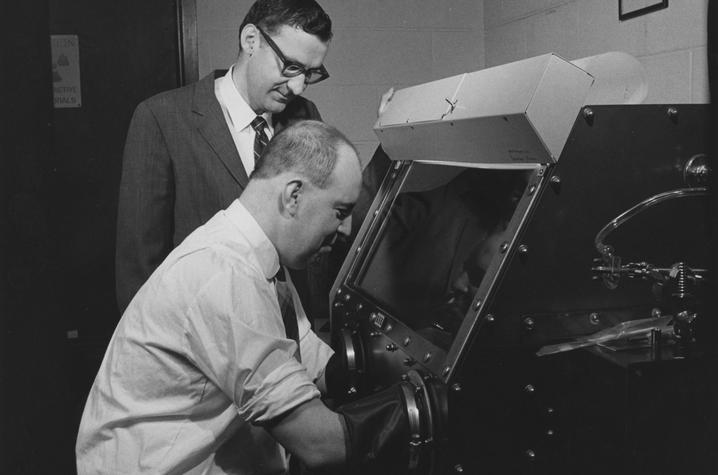 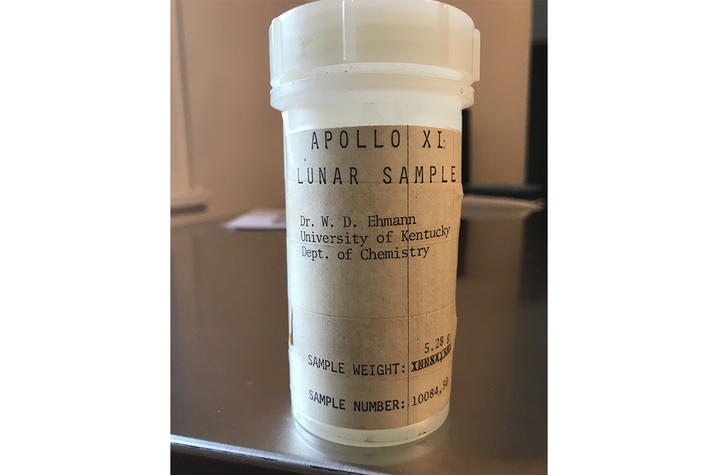 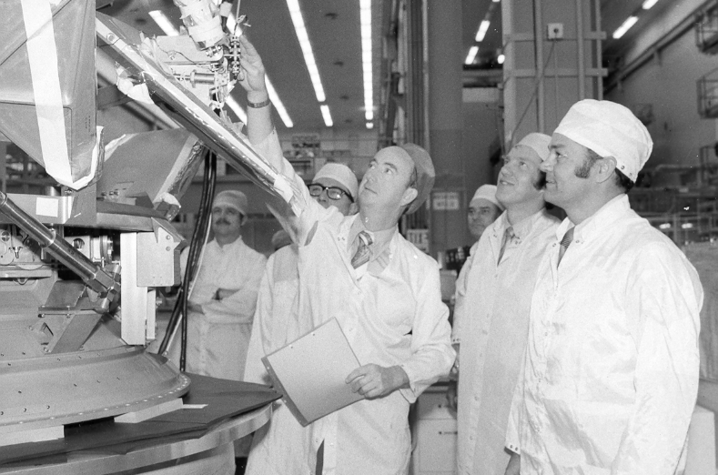 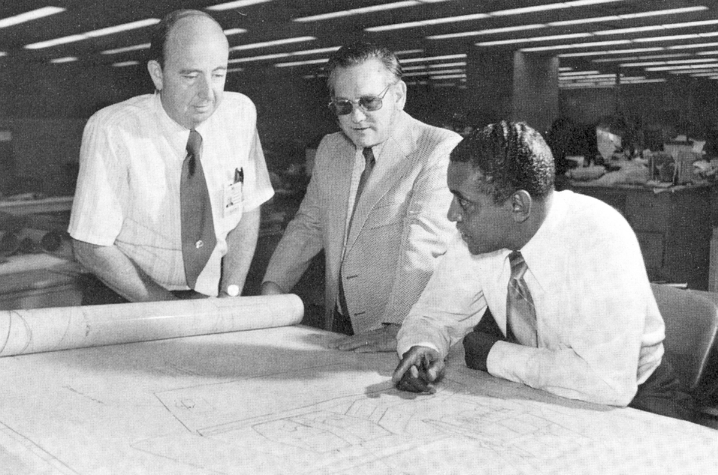 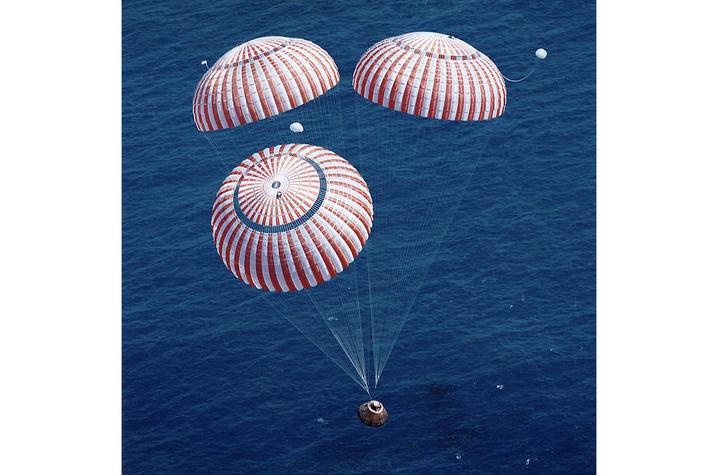 LEXINGTON, Ky. (July 19, 2019) — Tomorrow, July 20, 2019, will mark 50 years since human beings first landed and walked on the surface of the moon. Nearly 650 million people around the world watched as Neil Armstrong and Buzz Aldrin stepped down from the lunar module and left their footprints on the lunar surface. It was described by "CBS Evening News" anchor Walter Cronkite as "the greatest adventure" in man’s history, and remains one of humankind’s greatest symbols of achievement.

As the United States and the world reflect on this historic moment, the University of Kentucky is remembering its own people who played important roles in making it happen. From working on the Saturn V rocket, to designing the parachutes that deployed when the astronauts returned, to analyzing the moon rocks that were brought back, former UK students, faculty and alumni worked firsthand on many projects funded by the famous NASA program of the 1960s and '70s.

Perhaps one of UK's most well-known people who worked on behalf of the Apollo program was William D. (Bill) Ehmann, who served as a chemistry professor and associate dean of research at UK for more than 35 years (1958-1995). Ehmann was one of the first, and few, people selected by NASA to analyze the moon rock samples the Apollo 11 astronauts brought back to Earth. This was because Ehmann had developed a unique apparatus and technique called neutron activation analysis at UK that allowed him to quickly analyze the samples without destroying or contaminating them in the process.

"These rocks came from the moon; they were valuable samples,” said Stephen Yates, a UK professor of chemistry who worked with Ehmann after he joined the faculty in 1975. "The last thing they'd want to do is destroy them in any way. Bill's methods were able to analyze them without doing that."

"They were kept in a safe in his office in the Chem-Phys Building, and they were actually guarded at night initially," he said. "It was quite exciting for us kids. I remember my dad bringing us into his lab at night after the samples were delivered, and we opened up the safe, and we each got to hold this plastic sample tube that contained moon samples. I knew we were lucky to be among the first people to do that."

Later that semester, Ehmann, who was serving as UK's College of Arts and Sciences' Distinguished Professor that year, delivered the Distinguished Professor Lecture about his work with the moon samples, with his wife Nancy, his mother Victoria, and son Bill in the audience. According to an Oct. 15, 1969, Kentucky Kernel article, Ehmann showed slides of the samples and concluded his lecture with a colored slide of the Earth, stating that our planet "bears, clinging to its flanks, the future and destiny of the universe."

Ehmann passed away in 2013, but according to his son, his father was one of the first people who helped answer the question about the origin of the moon. Was it originally an asteroid that got caught in Earth's orbit, or was it once a part of the Earth, separated by some type of collision?

"The big question was, do you see elements that match those we see on the surface of the Earth, or is it totally different?" the younger Ehmann said. "His results showed pretty quickly that the elements and their proportions were very similar to Earth rocks. My dad's work helped resolve that question of the current theory, which is that the moon was once part of the Earth."

The senior Ehmann shifted focus later in his career, and began studying neurological conditions such as Alzheimer's disease and amyotrophic lateral sclerosis (ALS). But he used his same moon rock analysis technique to study biological materials instead.

"They were able to answer human questions using what they learned throughout the Apollo program," his son said. "The advantage, again, was that it was nondestructive, and they debunked the hypothesis that aluminum in cookware was connected to Alzheimer's disease. They were able to confirm that it is molecular and/or genetic, and that set the stage for contemporary research in Alzheimer's."

In an article Ehmann wrote for the Journal of Radioanalytical and Nuclear Chemistry in 1997, he says:

"Throughout the 1980s and '90s we have continued to explore the possible relationship of trace element imbalances to several neurological diseases, thereby completing a journey from rocks in space, to the third rock from the Sun, and finally to the real hard place, the human brain. It has never been dull and I continue to encourage new graduate students to consider radiochemistry as an exciting career."

Ehmann is remembered fondly by his colleagues who still teach at UK, like Yates and Gary Ferland, a UK professor of astronomy.

"Bill was involved in this work from beginning to end, with the Apollo program, and he was one of those people you would want to be doing that kind of work," Yates said. "He was also a very good mentor to students and a first-class analytical chemist."

"People were really excited to have the moon rocks here in Lexington," said Ferland, who heard about the events from Ehmann when they worked together at UK in the 1990s. "The state legislature came out and met in a big room in the Chem-Phys Building, and the governor came and watched Bill Ehmann measure moon rocks. It was a really big deal."

Ehmann served as chair of the UK Chemistry Department from 1972-1976, and then as associate dean for research in the UK Graduate School. His numerous honors during his time at UK include being named a Distinguished Professor in the UK College of Arts and Sciences, and later a member of the college's Hall of Fame. He was awarded the University Research Professorship in 1977, and in 1988 received the William B. Sturgill Award for his contributions to graduate education. In 1964 he was named a Fulbright research scholar and traveled to Australia for a year where he completed groundbreaking research on meteorites. Ehmann also received many awards outside of the university, including the Kentucky Academy of Science Distinguished Scientist Award in 1982 and the American Chemical Society’s Award for Nuclear Chemistry (now the Seaborg Award) in 1996. In the same year, the American Nuclear Society created the W.D. Ehmann Award in his name, for which he was the first recipient.

While Neil Armstrong stepping onto the surface of the moon may be the most remembered moment of the Apollo 11 mission, it's important to remember the other half of U.S. President John F. Kennedy's goal that was stated in his famous 1961 speech: "to land a man on the moon and return him safely to the Earth."

Charles Lowry, a graduate of the UK College of Engineering, played a significant part in making that safe return happen.

Lowry, who is a Paducah, Kentucky, native, was a student in the mechanical engineering department at UK. He graduated with his bachelor's degree in 1955 and a master's in 1957. He spent his time at UK working in the aeronautical laboratory and for a local parachute company called Irving Air Chute, kicking off his career in the parachute business. He later worked for North American Aviation on fighter jets, and one of the company's California divisions was contracted to do work for the Apollo program.

"They asked me to come there, so I moved to California in 1962 and I worked on it for 13 years," Lowry said. "I worked through all the design, all the missions, the whole program."

A self-proclaimed "parachute guy," Lowry headed up a team that designed Apollo 11's parachute system that deployed and safely lowered the module carrying the astronauts down to the Pacific Ocean on July 24, 1969.

But Lowry’s work started long before Apollo 11. He recalls the Apollo 7 mission, which was the first time they brought a group of astronauts back to Earth safely.

"That was a huge thrill for me," he said. "We'd worked so hard and so long to get to the point that we could bring people back from space."

After going on to recover astronauts from Apollo 8, 9 and 10, Lowry said he was very confident in his systems by the time the Apollo 11 crew was on their way home from the moon.

"We knew it would work, we tested them. There was no surprise," he said. "I was more in awe of men landing on the moon. That was a thrill I'll never forget."

In addition to parachutes, Lowry also worked on docking and ordinance systems design, and then later structures, mechanical and crew systems for Apollo. In 1975, his company was contracted to design and build the Space Shuttle.

"I did a number of systems on the Space Shuttle, one of them was the drag parachute," he said. "Every time it would land, a big red, white and blue parachute would come out. It helped land the oribiter and certainly made for a colorful landing."

Now, at 87 years old, Lowry is semi-retired. But he stays busy working as a consultant on parachutes for NASA and private companies like SpaceX, Boeing and Blue Origin, Amazon.com founder Jeff Bezos' aerospace/spaceflight company.

Lowry says the University of Kentucky was the place that set him up for his successful and very fun career.

"I was a not-so-great student, I didn't have much money, but UK gave me a boost up to a wonderful career, which I'm still very much involved in after 64 years."

Lowry also credits many of his mechanical engineering professors at the time, particularly Karl Otto Lang, who ran the aeronautical lab where Lowry worked.

"Those guys really inspired me and gave me opportunities, gave me a job, gave me an education," he said. "And when I look back on it, it was just wonderful. And I never really thanked them like I should have. In later years, you realize those things. But I love my school, and want to give back in any way I can."

There are likely many more men and women of UK who contributed to the massive body of work that resulted in the moon landing and other Apollo missions. A few who are noted in UK's archives include: