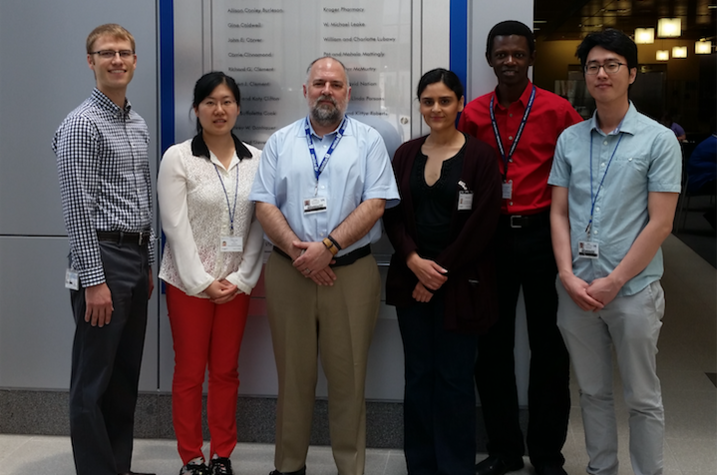 LEXINGTON, Ky. (June 26, 2017) – New findings published in Nature Chemical Biology show promise for finding new solutions to treat lung cancer and other deadly diseases. Kentucky continues to lead the nation in incidence and death rates from lung cancer, and the University of Kentucky is committed to reducing these numbers.

According to the National Cancer Institute, cancer is among the leading causes of death worldwide. And of those diagnosed in the United States, lung cancer accounts for 25 percent of cancer deaths. The numbers are sobering: one out of every two patients diagnosed with lung cancer won’t survive past 12 months.

In an effort to combat this problem, a collaboration between scientists from University of Kentucky College of Pharmacy, Memorial Sloan Kettering Cancer Center, and St. Jude Children’s Research Hospital brings researchers one step closer to a solution.

A compound developed by Dean Kip Guy’s lab of UK College of Pharmacy, with research that began at St. Jude Children’s Research Hospital, now provides us with a way to block cancer-causing proteins on a cellular level.

The groundwork began more than 10 years ago when Dr. Bhuvanesh Singh, a physician-scientist at Memorial Sloan Kettering Cancer Center, identified that an increase of a protein called DCN1 led to more malignant lung cancers and shorter life spans for his patients. Of the patients he studied, those with high levels of DCN1 succumbed to the disease more quickly than those with normal levels.

Frustrated by their findings, Singh’s team set out to study the specifics of DCN1. While DCN1 is a normally occurring protein, his team found that too much of it leads directly to cancer formation. Simply put, a malignant tumor was formed when the amount of DCN1 in a cell was increased. Thus, patients with more DCN1 got sick more quickly and died faster than their counterparts.

Efforts in Brenda Schulman’s lab at St. Jude, led by biochemist Daniel Scott, established how DCN1 interacts with other proteins and controls cellular processes. Their key discovery used X-ray crystallography to show that a small modification of the partner protein to DCN1, known as UBE2M was required for DCN1 to work. This modification, N-terminal acetylation (while common) had not previously  been shown to be critical to controlling activity of this specific protein. Recognizing the potential for targeting this modification, Schulman reached out to form a collaboration between the three laboratories.

Their goal: to develop a way to stop DCN1 from killing patients.

Understanding the behavior and function of DCN1 was far more ambitious than running simple tests. It was a significant step forward in understanding how proteins within a cell work.

Guy describes the interaction as a “lock and key model.” Scientists have a blank key—which is UBE2M—and a lock, which is DCN1. The key wants to fit into the lock so it’s modified until it fits. This modification process is N-terminal acetylation.

“What’s the significance?” Guy said. “Well, we’re the first people to show that protein interaction controlled by N-terminal acetylation can be blocked. We’re essentially jamming the lock with a compound so the key won’t fit.”

The items jamming that lock are a series of small molecules created in the lab. When the molecules were tested directly in cancer cells, they worked. They effectively blocked DCN1 from binding to UB2EM. After decades of collaborative research, there was finally a barrier between lock and key.

The impact of these findings for healthcare and lung cancer patients specifically could be profound.

“We are excited about the implications of this research, which offer us a meaningful solution for addressing diseases like cancer, neurodegenerative disorders, and infection,” Schulman said. “It's exciting to collaborate with so many complementary groups of expertise and to watch how Dr. Scott and Dr. Hammill led the team. This research opens many new doors for us.”

The collaboration between these three labs could mean relief to many of those suffering from a variety of diseases.

“To have spent decades on this research and have such promising results is truly exhilarating," Singh said. "At the end of the day, what matters most is improving health outcomes for our patients. This work represents a very important step towards developing a new approach to treat the most difficult of cancers and hopefully increase cure rates.”

This research was funded in part by National Institutes of Health, the Howard Hughes Medical Institute, and American Lebanese Syrian Associated Charities.