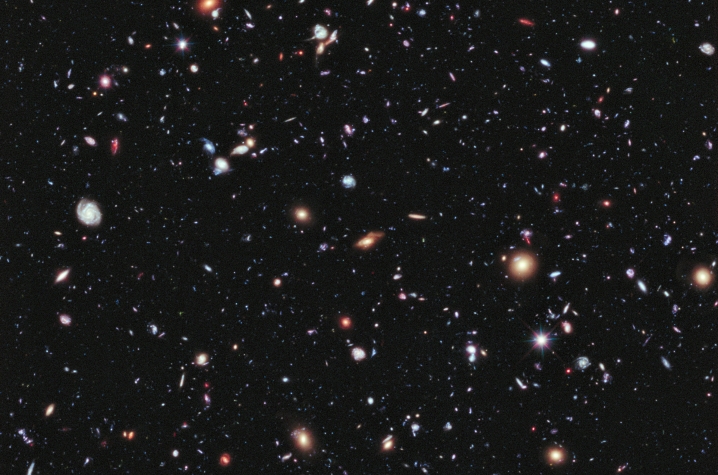 LEXINGTON, Ky. (Aug. 14, 2014) — Research at the University of Kentucky expands well beyond campus, and thanks to  Professor Gary Ferland in the Department of Physics and Astronomy, we can measure the distance in light years instead of miles.

Ferland’s research focuses on theoretical atomic and molecular physics and how matter in space produces the light we see. Unlike other scientists, astronomers cannot perform experiments. They can’t reach out and touch another galaxy. But they can look into the universe's distant past by observing galaxies far from Earth. It’s a science driven by observation and analysis. For this reason, Ferland and his colleagues are experts in remote sensing.

“We take the light that we can receive here on Earth and figure out what’s happening out there,” Ferland said. “Our computers here on the Earth allow us to run simulations to see how matter in space emits light, and what that light tells us about the galaxy.”

In May, Ferland was awarded a Lererhulme Trust Professorship at Queen’s University Belfast, Ireland. There, Ferland continues his research with one of the world’s leading teams on atomic and molecular physics. These visiting professorships are one component of an increasingly collaborative astronomy field.

“Astronomy today is so expensive that entire countries can’t afford to purchase an instrument, like a deep space telescope, so researchers must be fiercely collaborative,” Ferland said. “It’s very liberating to be in Lexington and be able to telecommute with my colleagues across the globe.”

In the past six months, Ferland’s team has also been awarded two high-profile research grants, from the National Science Foundation and NASA’s Theoretical Astrophysics program that will support their endeavors. These awards, amounting to more than $1 million, contribute to the theoretical calculations Ferland’s group conducts here at UK.

Ferland’s no stranger to these computer simulations, especially considering he built the industry standard. Ferland developed a computer program, Cloudy, to simulate and understand these processes. Cloudy is now one of the more widely used theory code in all of astrophysics. Cloudy was open source from its birth, allowing the astronomy community to improve and maintain it.

“I started Cloudy in 1978 at Cambridge and my work on it has continued ever since,” Ferland said. “It’s completely open-source. As the atomic theory gets better, computers get faster, Cloudy gets better and is able to tell us what is happening at the edge of the universe.”

To learn more about Ferland's research listen to this A&S podcast from 2013.