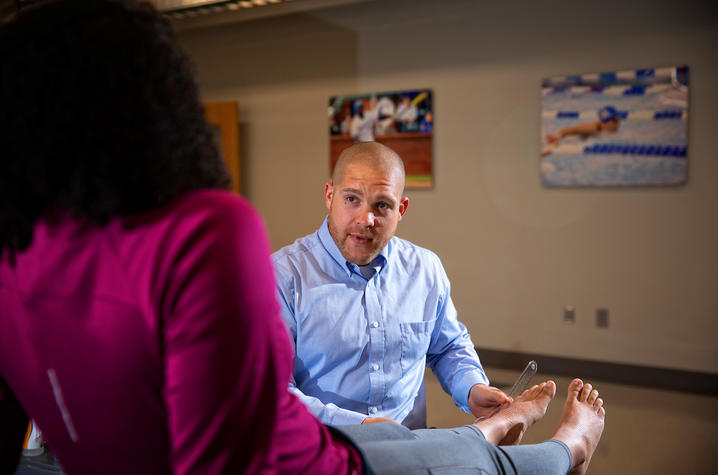 LEXINGTON, Ky. (May 16, 2022) — Researchers from the University of Kentucky’s College of Health Sciences are part of a team that is studying how to prevent injuries and improve warfighter performance in female Marines.

Matt Hoch, Ph.D., associate professor in the Department of Athletic Training and Clinical Nutrition and associate director of the UK Sports Medicine Research Institute (SMRI), along with his investigative team, received a Department of Defense $4 million grant from the United States Office of Naval Research for their three-year study, “Musculoskeletal health considerations to improve resiliency and lethality in female Marines.”

This project was developed and is being executed in conjunction with military scientists and clinicians at the Naval Health Research Center and Naval Hospital Camp Pendleton in San Diego, as well as faculty at the University of North Carolina-Charlotte.

“Going back to a policy announced in 2013, changes in the military have authorized women to pursue combat occupations,” Hoch said. “Before then, certain combat-related positions were closed, and the number of women in the military pursuing these roles has been slowly increasing. But one of the things that we’ve seen over time is that women are at a much higher risk for musculoskeletal injuries than men. What we will do with this project is dig deeper into why that is, and we will find strategies to prevent some of those injuries from happening.”

Time and time again, Hoch said, one of the potential barriers for women serving in the military is sustaining injuries during training.

“Some of the initial work on this project will examine injuries and care seeking from an epidemiological standpoint,” Hoch said. “This portion of the project will look longitudinally over several years to see what injuries active-duty women in the Marine Corps are incurring most frequently, and what occupations those injuries are happening in. Then, we can analyze the health care utilization patterns.”

To compliment the epidemiological aspect of this project, Hoch said the team will also measure several aspects of physical performance and health in active-duty women and men in the Marine Corps to identify unique contributing factors for musculoskeletal injury in each group. Much of the research, which officially began Aug. 30, will occur at Marine Corps Base Camp Pendleton, in San Diego.

This is a continuation of the critical research being conducted within UK’s College of Health Sciences and the SMRI. For 18 consecutive years, the College’s researchers have been awarded more than $50 million in grants from the Department of Defense — with $15 million going to the SMRI.

The College and SMRI would also like to thank U.S. Rep. Harold “Hal” Rogers (KY-05) and his office for their years of support.

“UK’s selection is a testament to the expertise and ingenuity at the College of Health Sciences and the Sports Medicine Research Institute,” Rogers said. “These are real-world issues, that when solved, will ensure our brave Marines continue to be among the most fit and well-trained armed forces in the world. It is an important task, and I’m confident in the talented researchers at UK who are leading the way for our military service women.”

“Once again, our professors and researchers are helping to make the world a better place,” said CHS Dean Scott Lephart, Ph.D. “By studying how we can better help our Marines, it is no exaggeration to say that this research will help make Americans even more safe. We are proud to be leading such an important initiative.”