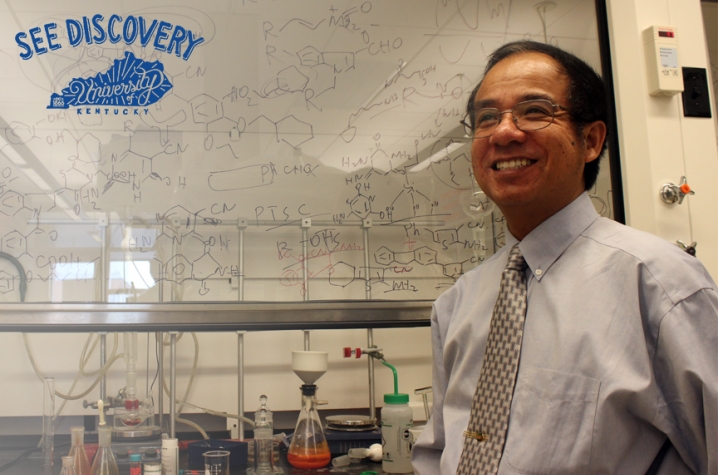 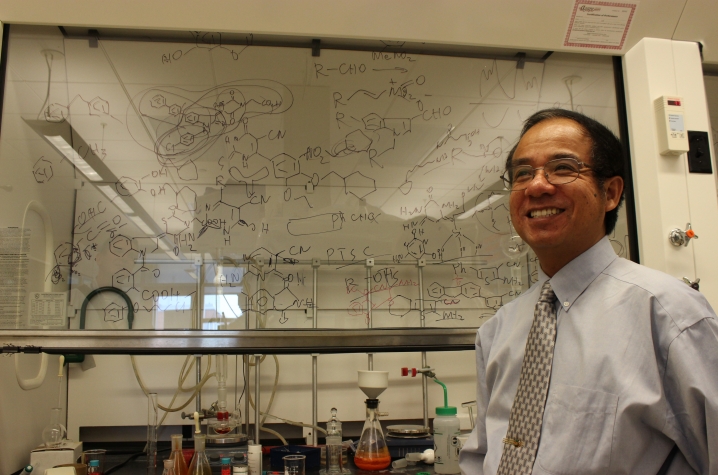 LEXINGTON, Ky. (Sept. 18, 2014) — A researcher at the University of Kentucky College of Pharmacy is working to develop the first-ever FDA-approved treatments for cocaine overdose and cocaine addiction.

The first is a fast-acting drug to treat acute cocaine toxicity by neutralizing the drug in the bloodstream. The second is a potential longer-acting “vaccine,” which could help break the cycle of addiction by preventing users from experiencing any of the desired effects of taking cocaine.

“The idea in both cases is to break down the cocaine chemically, to make it inert,” Zhan said. “In an overdose, you want that to happen very quickly in order to save the patient’s life. In treating addiction, you need a longer-acting drug to prevent a relapse, so that the treatment is still working even when the patient’s better judgment is not.”

Despite a recent resurgence in heroin overdoses, cocaine overdose remains the country’s No. 1 cause of emergency room admissions due to illicit drug use, with physicians treating more than 500,000 cases each year in the United States. Unlike heroin overdose, there is currently no approved treatment for cocaine overdose, which kills an estimated 5,000 people annually nationwide.

The overdose treatment proposed by Zhan and his collaborators at Columbia University and University of Michigan is derived from a naturally occurring enzyme found in bacteria that flourish in soil where coca, the source of cocaine, is grown. The enzyme, bacterial cocaine esterase, hydrolyzes cocaine into less harmful end products. The proposed addiction treatment is based on a human enzyme involved in cocaine metabolism, called butyrylcholinesterase.

Enzymes, which are highly specialized proteins, are of particular interest to drug discovery researchers. Their role in nature is to act as biological catalysts, regulating virtually all complex biochemical reactions. They are crucial to cellular processes such as metabolism, enabling organisms to efficiently break down complex molecules into simpler parts.

But enzymes can also be fairly fragile compounds, and they tend to break down and become inactive when exposed to heat. For example, bacterial cocaine esterase has a half-life of about 12 minutes at body temperature. This makes it a poor candidate for therapeutic purposes, Zhan says.

Zhan and his colleagues, along with collaborators at Columbia University and the University of Michigan, introduced two mutations to the bacterial cocaine esterase molecule to make it thermally stable for up to six hours. Likewise, Zhan’s team modified the human enzyme to improve its catalytic activity specifically against cocaine by 4,000 times. Both experimental treatments, developed with grant funding from the National Institutes of Health, are now in clinical trials to test their efficacy in humans.

Zhan’s research specialty is drug design and discovery through integrated computational-experimental studies. Using a powerful supercomputer, Zhan and his team are able to produce models of many thousands of different, novel analog compounds based on a common structure. They are then able to model all sorts of different interactions to predict how these molecules will behave in the body.

“The goal is to find a drug that will not only treat the disease, but more importantly not to harm the patient,” Zhan said. “It would be very expensive and impractical to synthesize and test thousands of novel compounds. But through computational modeling of a series of complex interactions, we are able to narrow the field from thousands of compounds down to just a few.”

Last spring, the college announced the creation of the Molecular Modeling and Biopharmaceutical Center, to leverage Zhan’s expertise in computational drug design and to partner with investigators engaged in drug design and discovery projects, throughout the college and across the university.

Working closely with the college’s Center for Pharmaceutical Research and Innovation, the new center will specialize in computational chemical biology, assisting investigators in creating models for promising novel drug targets. In addition, it will conduct biochemical validation of targets and models. Another area focus will be biologics as therapeutics. It will help researchers design protein drug candidates as well as model desired functionality and stability in potential therapeutics.

“The Molecular Modeling and Biopharmaceutical Center will add great value to the university’s research community,” said Dean Timothy S. Tracy. “Dr. Zhan and his laboratory have developed many tools, computational methods and proven best practices in drug design, and I am excited that this center will allow other researchers to tap into that expertise in a new and exciting manner.”