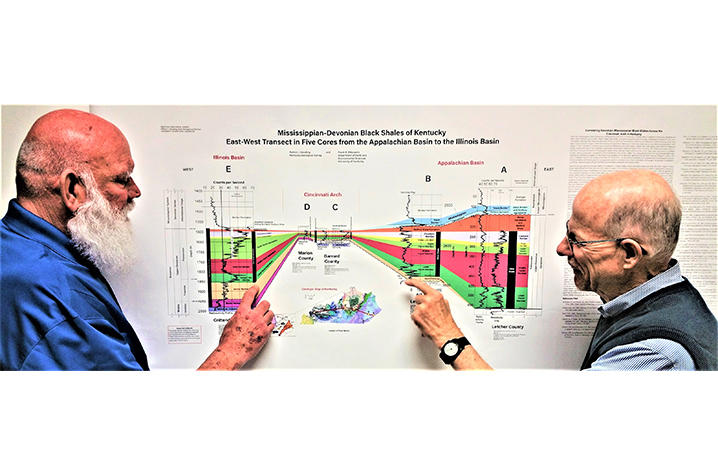 Authors Patrick Gooding and Frank Ettensohn look at their new publication on black shales in the Appalachian and Illinois Basins.

LEXINGTON, Ky. (April 17, 2019) — A new wall-size chart published by the Kentucky Geological Survey (KGS), a research unit of the University of Kentucky, shows how black shale formations in the Appalachian Basin of Eastern Kentucky are connected to similar shales in the Illinois Basin, which underlies parts of Western Kentucky, Indiana and Illinois. Black shales are found beneath almost 70 percent of Kentucky and are important for the oil and natural gas resources they contain. So tracing the presence of the shales in the Appalachian region, where more is known about them, to their Illinois Basin counterparts could be valuable for future resource exploration in the Illinois Basin.

One of the challenges of making such correlations between the basins is the different names given to shale units in different states and basins. Authors Patrick Gooding, of KGS, and Frank Ettensohn, of the UK Department of Earth and Environmental Sciences, used five rock cores housed at the KGS Earth Analysis Research Library for a study that resulted in the publication of “Mississippian-Devonian Black Shales of Kentucky: East-West Transect in Five Cores From the Appalachian Basin to the Illinois Basin.” Such cores, drilled deep underground during energy exploration or research projects, preserve valuable information about the geology and resources of the area from which they are retrieved.

The publication is dominated by a large transect, a graphic representation that connects the locations of the five cores from Crittenden County in Western Kentucky to Letcher County in the southeastern part of the state. Cross sections (graphical depictions of vertical slices of geology used for illustrating different formations) at each core’s location provide more information about the geology there. Making cross sections from rock cores helps show how rocks change from one region to another and over geologic time.

The chart also addresses a debate about the Cincinnati Arch, a large geologic bulge cutting across Kentucky from the Covington area south to Cumberland County and separating the two basins. Some geologists believe the arch was exposed during the Devonian Period (360 to 410 million years ago), but this cross section shows that a thinner layer of Devonian black shales was deposited across the arch, which was covered by seas at the time. The arch has changed positions through time, and the new chart shows for the first time its location during the Devonian and Mississippian Periods.

The new publication is available for free download from the KGS Publications and Maps website, or a paper version can be purchased by contacting the KGS Public Information Center toll-free at 877-778-7827 or by email to KGS-PUB@lsv.uky.edu.