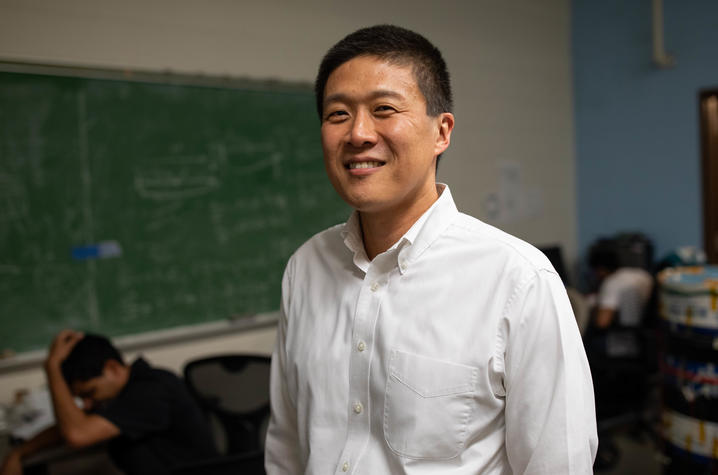 Brad Plaster, associate chair and professor of physics in the UK College of Arts and Sciences.

LEXINGTON, Ky. (Oct. 5, 2018) — "People have been searching for an EDM (Electric Dipole Moment) of the neutron since 1950. We are trying harder and harder to find the needle in the haystack. If it were discovered at the anticipated level of sensitivity and accuracy that experiments can obtain now, it would be completely revolutionary. It would be evidence for physics that we can’t currently describe theoretically."

Brad Plaster, associate chair and professor in the University of Kentucky College of Arts and Sciences' Department of Physics and Astronomy, lights up as he describes his research.

"Protons and neutrons compose the nucleus of atoms. Neutrons have no electric charge. However, they are composed of quarks, subatomic, fractionally charged particles," he said. "What the EDM would postulate is that there might be some slight imbalance of positive and negative charge within the neutron. In order for this to actually occur, time-reversal symmetry would have to be violated. Time-reversal means that if the arrow of time could hypothetically be run backwards, the laws of physics would be different."

Plaster’s research on the tiniest particles has potentially massive repercussions.

Plaster's work has garnered national attention. In the fall of 2017, he received a grant from the National Science Foundation for $184,863 to investigate possible flaws in the standard model of physics. That same year, he also received $1.425 million from the U.S. Department of Energy to research time-reversal symmetry violations by the neutron.

Plaster is involved in not one, but two EDM of the neutron experiments.

"One is running at Los Alamos National Laboratory out in New Mexico," he said. "It’s a less accurate cousin of an experiment we're preparing to run at Oak Ridge National laboratory in Tennessee."

This research involves working with both national and international physicists from numerous universities. Working in a collaborative nature with a wide range of people around the world is one of Plaster's favorite things about his work.

"In nuclear physics, we work in big collaborations. Learning to work with a broad range of people is a skill that is useful for anyone to develop," he said. "Another thing I like about physics is that the experiments are hard, they take a long time, so you can really dig deep into a problem. You can work on it for a long time and it won’t go out of style."

Plaster's research extends well beyond the EDM. He has studied the decay of the neutron for the past 15 years.

"There were theoretical ideas earlier this year that posed the question of 'could the neutron decay into a dark matter particle?' We had all this data that we had collected for 15 years; it was really one of the most exciting times I’ve had in my research career," he said. "We mined the data, and tried to find evidence of this decay mode of the neutron into a dark matter particle, but we found no evidence of it. So, we immediately published two papers and put very stringent constraints on these theories. It was very nice because we had designed these experiments for a different purpose, and then when these theories came along, we were able to kill them off."

Plaster's skill-set is such that he is able to work within the field of dark matter, but his primary focus remains the EDM of the neutron.

"This EDM of the neutron, if we ever were to discover it, would be revolutionary for nuclear physics and particle physics," he said. "That would truly be a discovery that was unanticipated."

Just as clear as his passion for research is his strength as a teacher. In 2018, Plaster received the UK Provost's Outstanding Teaching Award.

"What's most meaningful about the award is I feel I was able to accomplish something in an area I never thought I would have," he said. "I think it was through people in the physics department, particularly former chairs Michael Cavagnero and Sumit Das, and the current chair Al Shapere, who realized I had some potential for teaching, who pushed me to develop it, and then I actually found I really enjoyed it."

In addition to his skills as a teacher and researcher, Plaster provides valuable mentorship to graduate students.

"Our graduate students get a lot of tangible skills they can take with them into the marketplace," he said. "One of my graduate students did a lot of programming during his time in my lab, and he got a job with Humana in Louisville doing big data analysis and machine learning. Another decided he didn’t want to stay in nuclear physics and got a postdoc at Yale in computational biology. He didn’t know a thing about biology, but they hired him because he was highly productive here, and he learned that technical skill set."

Before coming to UK, Plaster completed his bachelor's degree and doctorate at MIT and was a postdoc at Caltech. He joined the UK Department of Physics and Astronomy in 2007.

"The faculty here were excited about the department and that excitement had a huge impression on me. Beyond the people in my research field, the department as a whole, had a very major role in my wanting to come to UK," he said. "What really excited me about this place was the collegiality."