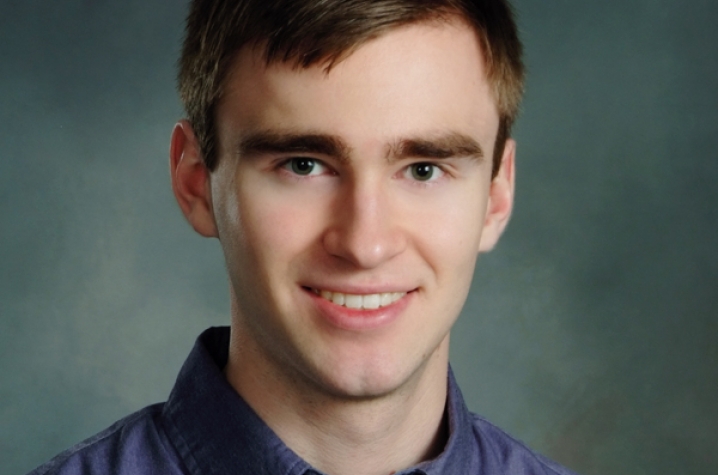 LEXINGTON, Ky. (Sept. 23, 2015) — The Astronaut Scholarship Foundation (ASF) has selected University of Kentucky senior Robert Cass, of Lexington, as one of this year's 38 recipients of the prestigious $10,000 scholarship. The ASF Scholarship is presented annually to outstanding college students majoring in science, technology, engineering or math.

For more than 30 years, the ASF has identified and supported the best and brightest undergraduate students pursuing educations in STEM (science, technology, engineering and math) fields across the nation. The Astronaut Scholarship is known for being among the most significant merit-based scholarships awarded to undergraduate STEM students. Candidates must be nominated by faculty of the participating universities based on their display of initiative, creativity and excellence in their chosen field.

ASF has awarded more than $4 million to deserving students around the U.S. to date. UK students have earned a total of $161,000 from the ASF since 1998.

Robert Cass, the son of Valerie and Wayne Cass, graduated from Lafayette High School in 2012 before coming to UK. At the university, he is pursuing a bachelor's degree in mathematics. A member of the Honors Program, Cass was also named a Chellgren Fellow in the UK Academy for Undergraduate Excellence.

Cass is encouraged by the recognition from the foundation. "Receiving this award reinforces my commitment to work hard in achieving my academic goals," he said.

UK's 2015 Astronaut Scholar found his passion for math in his teens when he participated in a national competition. The experience helped him realize that there is more to the field of study than memorizing formulas and doing repetitive calculations. His work with professors at UK and other institutions have only strengthened that interest for a career in academics.

"I am fascinated by the countless puzzles offered by mathematics, and by the surprising links that often exist between seemingly disparate problems. I am eager to continue my studies and pursue a career in research, so that I may contribute to our growing body of mathematical knowledge," Cass said.

At UK, Cass has participated in several independent study courses and informal seminars in number theory under the guidance of Professor David Leep. He also worked with Leep on a project in number theory, which began as a final paper in a "History of Mathematics" course taught by Associate Professor Ben Braun and extended beyond the conclusion of the course. The Astronaut Scholar credits both Leep and Braun as mentors at the university.

Upon completion of his bachelor's degree, Cass plans to pursue a doctoral degree in mathematics.

The Astronaut Scholarship Foundation is a nonprofit organization established by the Mercury Astronauts in 1984. Its goal is to aid the United States in retaining its world leadership in science and technology by providing scholarships for exceptional college students pursuing degrees in these fields. Today, more than 100 astronauts from the Gemini, Apollo, Skylab and Space Shuttle programs have joined in this educational endeavor. For more information on this foundation, visit online at www.AstronautScholarship.org.

UK students interested in the Astronaut Scholarship may apply through the university’s Office of Nationally Competitive Awards. Part of the Academy of Undergraduate Excellence within the Division of Undergraduate Education, the office assists current UK undergraduate and graduate students and recent alumni in applying for external scholarships and fellowships funded by sources (such as a nongovernment foundation or government agency) outside the university. These major awards honor exceptional students across the nation. Students who are interested in these opportunities are encouraged to begin work with Pat Whitlow at the Office of Nationally Competitive Awards well in advance of the scholarship deadline.