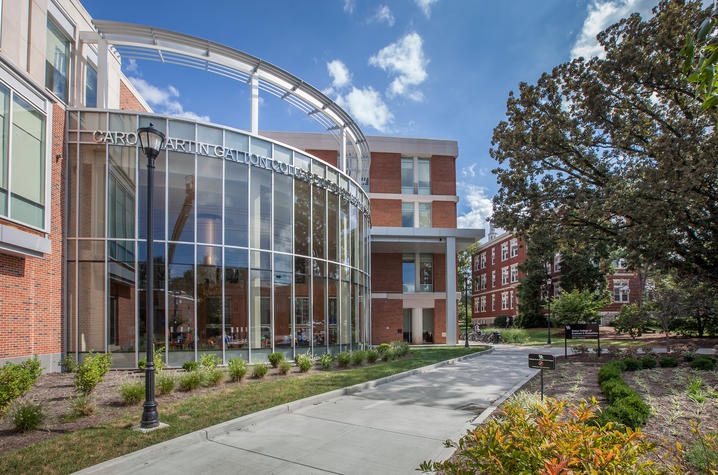 These are just a few of the major brands and companies taking a firm stance against racial injustice and demonstrating their support for the Black Lives Matter movement.

In the wake of protests across the United States, corporate America is shifting away from “business-as-usual” and instead, sharing messages of solidarity — some even going as far as to launch new initiatives surrounding diversity and inclusion.

Why are brands being more vocal? And what impact does it have on consumers?

UKNow asked those questions and more to University of Kentucky marketing and supply chain experts Meike Eilert and John Peloza. Their insight on the subject can be found in the Q&A session below.

UKNow: Are we seeing more companies take a stance on social issues? If so, how are they incorporating that stance into their brands?

Eilert: Yes, we’re currently seeing companies taking increasingly public stands on controversial issues. This is a function of changes in the value system of the marketplace and increased urgency to address inequalities in society.

For some, taking a strong stand on such issues is at the core of the brand and the company. Take Ben & Jerry’s and Patagonia, for example. Both companies have been advocating for issues — such as the environment or racial inequality — for years. Ben & Jerry’s is unique in creating flavors that reflect the company’s stand, for example, their Pecan Resist flavor.

But what we’ve seen right now is mostly symbolic action — such as companies posting a black square on Instagram for #BlackOutTuesday. However, many of them haven’t demonstrated to consumers that this stand truly reflects the company’s values and is backed up by action.

Peloza: The Dove Campaign for Real Beauty is probably the best example of the past couple decades. The idea behind this type of effort is, consumers are often looking for much more than functionality from products — they make purchases based on emotional and social factors, and brands can create value in those domains by highlighting their position.

UKNow: As mentioned above, Ben & Jerry’s is continuously denouncing racism and supporting Black Lives Matter on its social media channels. Based on your expertise, why do brands feel compelled to use their platform in this way?

Eilert: There are a few reasons why companies are using social media channels to denounce racism. First, social media is how they can get this message out to the public quickly. Social media content is also highly engaging, and companies can benefit from consumers sharing these posts with others. Activity on social media is also often picked up by traditional media which further enhances the message. But using social media can also be very helpful if the company wants to send a signal to their competitors who then hopefully will follow suit.

Ultimately, the dynamics of social media combined with the large followings that some brands have help them amplify the message they try to send.

UKNow: Nike was one of the first companies to proactively wade into racial inequality by creating a video with Colin Kaepernick. What are the pros and cons to launching such a bold marketing campaign?

Peloza: There are two reasons this is a smart strategy. First, companies like Nike rely on associations with professionals to support their brand — witness Jordan. How better than to ensure professionals are wearing your gear than to appeal to professionals when they are teens? The movement for which Kaepernick is the face is grounded in young people who want change.

Second, is the way in which identification works. This is the connection between people and brands based on the perception of shared values. When I identify with a brand — I’m likely to be loyal to it, forgive it if it makes a mistake, etc. We also use these associations to define ourselves to others in the marketplace through brands. What does it say about me if I wear Nike?

Disidentification is when I think someone shares the exact opposite view. And being repulsed from a group is often more powerful than the attraction toward a group. This manifested in the form of some burning their Kaepernick jerseys. When those who identify with Nike see that they become even more connected to the brand.

Eilert: A challenge with such a campaign is that if it touches on a controversial social or political issue that there will likely be backlash — as we’ve seen in the case of Nike. However, the question is whether the company cares, especially if the backlash isn’t coming from their target market. Brands can be extremely resilient to criticism, and consumer surveys have shown that younger generations actually prefer brands to get involved in social issues.

However, most companies will have to manage the perception that such a campaign is only a marketing gimmick, especially if they don’t have a history of taking such strong positions on issues. Even Nike has received criticism, particularly for their lack of diversity in the boardroom.

UKNow: In the past, how has race been used as a marketing tactic? For example, why would brands like Aunt Jemima and Uncle Ben’s use what they are now calling “a racial stereotype” to promote their product?

Eilert: Some brands have existed for a very long time. For example, the Aunt Jemima brand is 131 years old. Over time, value systems and culture, in general, change and brands typically update to stay current with the times. These brands are now just too at odds with consumers’ values. And we’re now in a time when consumers take strong action against such brands.

Unfortunately, the marketplace is full of products and brands that promote racial, gender and other harmful stereotypes, even today.

UKNow: When companies speak up on a social issue — such as racial inequality — what effect does that have on the average consumer?

Peloza: There is no such thing as an average consumer!

Brand managers seek to create strong loyalty among segments of consumers. The more the better, but no brand manager thinks their brand will appeal to everyone.

Finding ways to connect with subsets of consumers is a never-ending quest. But when something bad comes to light, the downside can be huge. So, these efforts are as much more about protection than they are about promotion when it comes to broad consumer impact.

UKNow: As American society continues to shine a spotlight on racial inequality, are there negative impacts for companies that decide not to take a stance?

Meike: This is an interesting question. Anecdotally, I would say that not taking a stand can definitely harm a brand. Just to give you a current example. The now former CEO of CrossFit was caught making racist remarks during a Zoom call, sparking huge outrage and resulted in several gyms across the U.S. dropping their affiliation with CrossFit and rebranding themselves. My local gym initially took a vague “we have to think about it” stance on this issue, resulting in several negative responses to their post. They decided to drop the affiliation with CrossFit a day later.

UKNow: Could companies speaking up on social issues be deemed as progress? If so, is there room for more progress in this space?

Eilert: In many ways it can be deemed as progress. Companies have a role model function and resources that can help the social issues make progress. For example, North Carolina experienced the collective power of companies after passing a “bathroom bill.” Estimates at the time were that this bill would cost the state over $3.5 billion in lost revenues.

However, as much as companies can help social issues, it is important that they ultimately reflect this stand within their organization as well. A co-author and I have been exploring the issue of “safe spaces” in the marketplace, and one comment that we’ve received repeatedly is the diversity of employees is a strong signal that the company is inclusive and will likely be a “safe space.”

There is a lot of progress that needs to be made when it comes to increasing diversity, not just in terms of race or gender, but also in terms of sexual orientation and disability, across all levels within companies but especially in top management.

UKNow: Is there anything else you would like to add?

Peloza: I would hope that everyone in society will continue to think about these issues as they engage as consumers in the market. Take the time to learn which companies are being progressive and commit to putting real effort into supporting those companies.

Eilert, an assistant professor of marketing in the Gatton College of Business and Economics, conducts research on strategic company and consumer decisions.