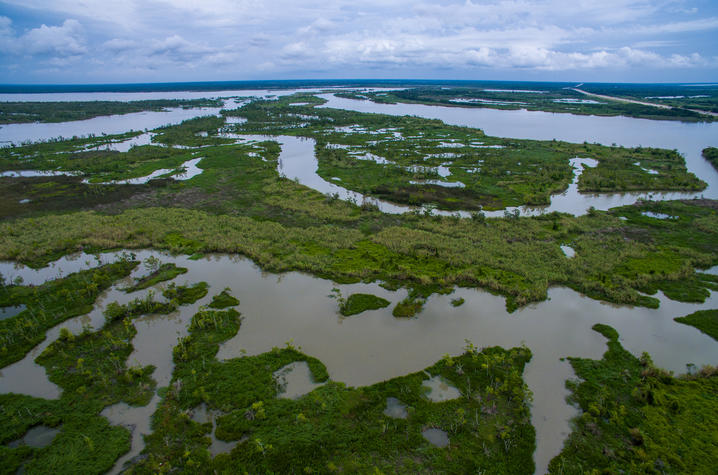 The $2.9 million award will allow a multi-institutional team to study methane emissions in coastal wetlands, which play an increasingly important role in ongoing and rapid climate change. iStock / Getty Images Plus

LEXINGTON, Ky. (Sept. 27, 2022) — Kevin M. Yeager, Ph.D., a professor in the University of Kentucky’s Department of Earth and Environmental Sciences (EES), has received a major transdisciplinary award from the National Science Foundation (NSF) for research on coastal wetland methane dynamics. Yeager is part of a multi-institutional team, led by Annette Engel, Ph.D., at the University of Tennessee (UT) Knoxville, who received the $2.9 million award to study methane emissions in coastal wetlands, which play an increasingly important role in ongoing and rapid climate change.

The team will focus on marshes in southern Louisiana and study methane emissions from coastal soils as sea-level rises and test natural microbial, landscape and hydraulic controls on emissions. The goal is to provide an inventory of methane “hotspots” in the landscape.

“Right here in our Commonwealth, people are increasingly feeling the significant and broad ranging impacts of rapid climate change,” Yeager said. “This is everyone’s challenge, and we are glad to be a direct part of understanding one important part of this puzzle — namely identifying the mechanisms by which large coastal deltas like the Mississippi River Delta are producing increasingly large amounts of methane, which is among the most potent of greenhouse gases.”

Nearly 1 billion people worldwide live along coasts on large river deltas and are currently being affected by sea-level rise related to climate change, which causes land loss and inland flooding. Sea-level rise rates, which are already more than a tenth of an inch per year, are expected to increase due to climate change. By some estimates, the Louisiana coastline is losing about a football field of land every couple of hours.

“Our research will expand our ability to model methane emissions from wetlands, which will improve our understanding of how marshes contribute to climate change and could potentially lead to better mitigation efforts in the future,” said Engel, who is a professor in UT’s Department of Earth and Planetary Sciences.

The other research team members include Brian Roberts and Marshall Bowles from the Louisiana Universities Marine Consortium (LUMCON); Haosheng Huang, Dubravko Justić and Giulio Mariotti from Louisiana State University; and Charles Schutte from Rowan University. The team includes experts from across the earth sciences and uniquely unites field research and computer modeling.

Yeager and the researchers will also provide science education and outreach experiences for students (undergraduate and graduate) at UK and at the partner universities, and the public.

“Professor Yeager is an internationally recognized expert in the dynamic response of the U.S. Gulf Coast to climate induced hazards, and it is not at all surprising that he and the multi-institutional team were chosen by this highly competitive NSF program to address this important climate-related problem,” said Edward Woolery, chair of EES at UK. “It also demonstrates the UK Department of Earth and Environmental Sciences' commitment to and reputation in climate science research and education, serving society locally and globally to reduce the uncertainties about hazards of climate change.”

Learn more about the project here.

Yeager is director of the Sedimentary and Environmental Radiochemistry Research Laboratory (SER2L) at UK, and is also a member of the Kentucky Climate Consortium.