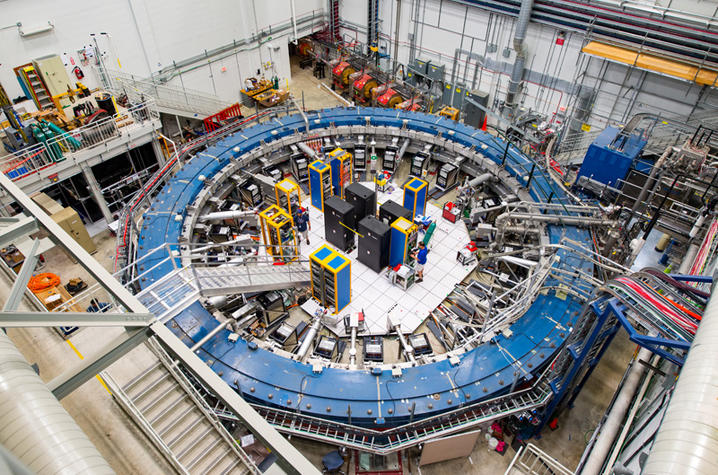 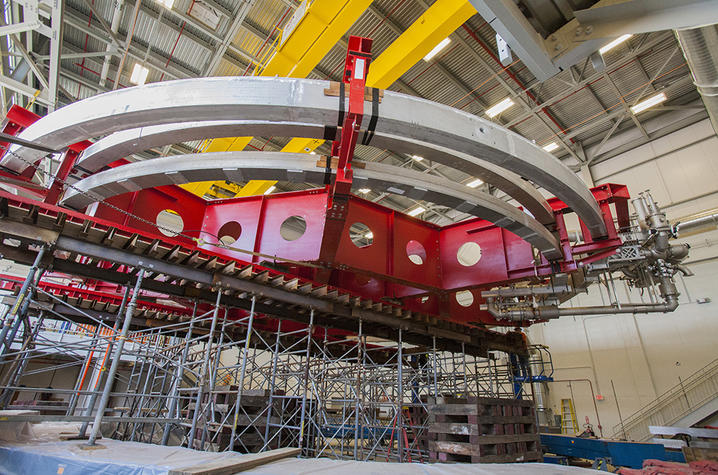 LEXINGTON, Ky. (April, 7, 2021) — A team of faculty and students from the University of Kentucky Department of Physics and Astronomy in the College of Arts and Sciences, supported by the National Science Foundation (NSF), has contributed to a major experiment at the U.S. Department of Energy’s Fermi National Accelerator Laboratory (Fermilab). The landmark results, announced today, are changing how physicists understand the subatomic world.

Fermilab’s three-year Muon g-2 experiment revealed that fundamental particles, called muons, behave in a way not predicted by the Standard Model of particle physics. The researchers think this behavior could be caused by the existence of undiscovered particles or forces.

“This new landmark result from the Fermilab Muon g-2 experiment verified a previous tantalizing hint from an experiment at Brookhaven National Laboratory for the need to consider new particles and forces in nature,” said Renee Fatemi, UK professor of physics and co-principal investigator.

Muons occur naturally when cosmic rays strike Earth’s atmosphere, and particle accelerators at Fermilab can produce them in large numbers. Like electrons, muons act as if they have a tiny internal magnet. In a strong magnetic field, the direction of the muon’s magnet precesses, or wobbles, much like the axis of a spinning top or gyroscope. The strength of the internal magnet determines the rate that the muon precesses in an external magnetic field and is described by a number that physicists call the g-factor. This number can be calculated with ultra-high precision.

With the support of a major equipment grant from the NSF, the UK team developed the hardware and software for acquiring and processing this experimental data.

“The system handles 25 gigabytes-per-second, about 100,000 times the streaming rate of watching Netflix movies,” said Tim Gorringe, UK professor of physics and co-principal investigator. “The data is then fed to a GPU farm, an array of processing units originally designed for high-performance computer gaming. The GPUs pan the data stream for the telltale ‘chirps’ of electrons ejected in muon decays. These chirps are how we ‘see’ the muon's wobble and how we measure its g-factor.”

As the muons circulate in the Muon g-2 magnet, they also interact with other subatomic particles, referred to as “quantum foam,” which pop in and out of existence. Interactions with these short-lived particles affect the value of the g-factor, causing the muons’ precession to speed up or slow down very slightly. The Standard Model predicts this so-called anomalous magnetic moment extremely precisely. But if the quantum foam contains additional forces or particles not accounted for by the Standard Model, that would tweak the muon g-factor further.

“This quantity we measure reflects the interactions of the muon with everything else in the universe. But when the theorists calculate the same quantity, using all of the known forces and particles in the Standard Model, we don’t get the same answer,” said Fatemi, who also serves as simulations manager for the experiment. “This is strong evidence that the muon is sensitive to something that is not in our best theory.”

The results announced today confirm and build on an earlier experiment performed at Brookhaven National Laboratory in 2001. The Fermilab experiment reused the main component from the Brookhaven experiment, a 50-foot-diameter superconducting magnetic storage ring. The Muon g-2 experiment sends a beam of muons into the storage ring, where they circulate thousands of times at nearly the speed of light. Detectors lining the ring allow scientists to determine how fast the muons are precessing.

The UK team was involved in two simulation efforts to model the storage ring fields and better understand their effects on the motion of the muons. These simulations are run on state-of-the-art high-performance computing centers, including those at Fermilab, the National Energy Research Scientific Computing Center and the Lipscomb Supercomputer Cluster at UK.

"The Muon g-2 experiment has been a great framework for me to dive into the world of data analysis and computational skills in the realm of physics," said Turner, who is a junior physics major. "It has given me insight into the methods used by researchers to further our understanding of the world around us."

“UK students and postdocs, who represent a diversity of backgrounds, have made truly impressive contributions to acquiring, analyzing and understanding the data from the g-2 experiment,” Plaster said. “They are the ones opening this window into the particles and forces of nature."

With more than 200 scientists from 35 institutions in seven countries, the Muon g-2 collaboration has now finished analyzing the motion of more than 8 billion muons from that first run. Data analysis on the second and third runs of the experiment is under way, the fourth run is ongoing, and a fifth run is planned. Combining the results from all five runs will give scientists an even more precise measurement of the muon’s wobble, revealing with greater certainty whether new physics is hiding within the quantum foam.