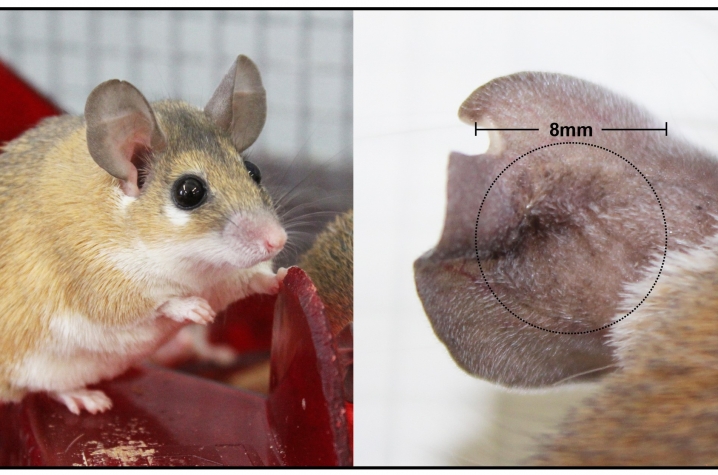 LEXINGTON, Ky. (April 25, 2016) — A long-standing question in biology is why humans have poor regenerative ability compared to other vertebrates? While tissue injury normally causes us to produce scar tissue, why can't we regenerate an entire digit or piece of skin? A group of University of Kentucky researchers is one step closer to answering these questions after studying a unique mammal, and its ears.

The team's new findings come on the heels of UK Assistant Professor of Biology Ashley Seifert's landmark discovery in 2012 that two species of African spiny mice found in Kenya could regenerate damaged skin. The group built on this work to show that a third species of spiny mouse, Acomys cahirinus, could completely close four millimeter ear holes and regenerate the missing tissue. Their recent work examined repair of ear holes across a number of different mammals and revealed that regeneration appears to be a unique trait.

While three species of wild African spiny mice and New Zealand white rabbits were capable of regenerating ear tissue, outbred laboratory mice and inbred strains such as the MRL (Murphy Roths Large) healer mice failed to do so and instead healed the wounds by scarring.

"First we need to understand how mammalian regeneration works in a natural setting, then comes the potential to create therapeutic treatments for humans," said Thomas Gawriluk, postdoctoral scholar and co-lead author of the study.

This new study suggests that genetic factors underlie variation in regenerative ability. Unlike many previous assumptions that there is a magic bullet for regeneration, like the presence of a specific gene, the group’s comprehensive genetic analysis shows that it is a complex trait. Importantly, cellular and molecular analysis by Seifert’s group has now demonstrated that spiny mice regenerate ear tissue by forming a blastema. Methodical demonstration of a blastema was important to place spiny mice in the context of regeneration in other vertebrates.

"These findings show that tissue regeneration in African spiny mice is similar to that described for other vertebrate regenerators like salamanders and zebrafish, giving us a powerful framework to understand mammalian regeneration," Seifert said.

Rigorous examination of this mammalian model is the first stage in figuring out molecular mechanisms that govern regenerative processes, which could have a significant impact on regenerative medicine for humans. Many regeneration biologists believe that inducing a blastema in humans would be a major step towards stimulating tissue regeneration.

Seifert, along with Gawriluk and postdoctoral scholar Jennifer Simkin; Assistant Professor of Statistics Katherine Thompson; Assistant Professor of Biology Jeremiah Smith; and doctoral student Shishir Biswas, are all co-authors on the study published in Nature Communications, which can be found at http://www.nature.com/ncomms/2016/160425/ncomms11164/full/ncomms11164.html. Collaborators at the University of Nairobi in Kenya and University of Georgia are also co-authors on the current study.