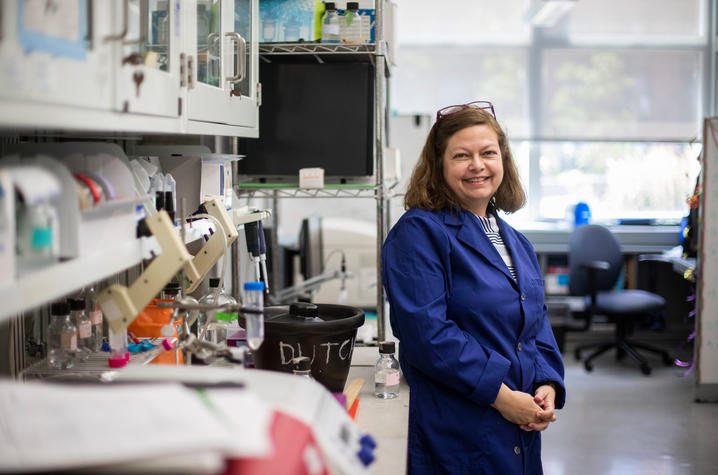 LEXINGTON, Ky. (July 22, 2020) — Early this spring, University of Kentucky virologist Rebecca Dutch answered some of our initial questions about COVID-19 and SARS-CoV-2, the virus that causes the disease. We asked her to take another look at the coronavirus pandemic.

Dutch, chair of UK’s Department of Molecular & Cellular Biochemistry, is leading the COVID-19 Unified Research Experts (CURE) Alliance team, supported by the Office of the Vice President for Research and the College of Medicine, which brings together faculty expertise from multiple disciplines across the university to focus on advising COVID-19 patient care and clinical trials based on emerging research.

UKNow: What do we know now about how COVID-19 is spread?

Dutch: Person-to-person — when someone is breathing out particles that contain the virus and someone else is breathing them in — seems to be the main way that this virus is spread. That’s the case for a lot of respiratory viruses. Initially, there was concern about its stability on surfaces, but the research over the last few months suggests that, while transmission can occur this way, it is a less significant source of spread.

There are also questions about if the virus can go airborne and potentially spread longer distances. But most of the epidemiology still fits with the idea that people are catching it because they're in a local environment with someone who has the virus. That’s why social distancing and using protective equipment including face masks is really critical for reducing the spread.

UKNow: What do we really know about how infectious the virus is compared to other viruses or the common cold?

Dutch: Transmission rates are measured by what’s known as the R0 value, which is the number of people on average that each person who is infected will spread it to. SARS-CoV-2’s R0 value is still thought to be somewhere between two and three. That makes it more infectious than some viruses, (for instance the Ebola virus’ R0 value is under two) but much less infectious than others (the measles virus is about an 18). But it’s still infectious enough that we are getting efficient spread. The goal of interventions like staying at home, wearing masks and social distancing is all about reducing that number.

UKNow: How similar is SARS-CoV-2 to other coronaviruses?

Dutch: On a genetic level, there are some differences between SARS-CoV-2 and similar coronaviruses SARS and MERS. But there are elements of all coronaviruses that we've seen in SARS-CoV-2 that really give us an idea about what direction to head. The thing that is most challenging about this one is that we seem to have a good amount of spread from people who don't know they're ill, whether it’s because they’re asymptomatic or they don’t yet have symptoms. That makes it harder to keep people from infecting one another. That’s introduced a big challenge, which is a likely reason as to why it has spread so efficiently around the world.

UKNow: What is the current consensus on whether or not the virus is mutating?

Dutch: All RNA viruses will have some mutations. This is a normal part of the replication process: the virus has something called a polymerase that copies the RNA and it does make errors. Coronaviruses have a sort of “proofreading mechanism” to correct these errors, but it's not perfect. We almost always see some mutations, but coronaviruses tend to be relatively stable in terms of their genetic profile.

We know with SARS-CoV-2, there are a few mutations that seem to happen and are now more common in circulating strains. For example, a mutation in the spike protein has been observed most recently in isolated strains, and there is some data to suggest it may increase transmission, but viruses with that mutation don't seem to make people sicker. So, we get some mutations, but there's nothing yet to indicate that they are making things worse.

UKNow: Could COVID-19 have an impact on the severity of the flu this year, and what is the possibility of contracting both?

Dutch: We don’t know yet, but we’ll be watching this very carefully. It's possible that you could get co-infections with COVID-19 and the flu. Generally, if you get a co-infection, you tend to be sicker than if you just contract one virus. One of these viruses basically damages the cells in your respiratory system, so the next virus coming in impacts an already-damaged airway.

But we also know that in some cases, having one virus can essentially keep the other from infecting. Right now, we don't know what scenario we're going to have. We’ll hopefully see some data from South America on this soon — the timing of their respiratory viruses is generally very different than ours because they’re currently in winter.

I would strongly suggest going into this flu season that everyone get a flu shot. Of course, anything you can do to decrease your chance of catching respiratory virus is good, but this will be a particularly important year for people to get vaccinated against the flu. We will unfortunately have to wait and see what happens with co-infections.

UKNow: Do we have a sense of what immunity we might have if we’re exposed to COVID-19?

Dutch: That is still really an ongoing question. We know that people who are infected mount an immune response. What we don't know is how protective it will be and how long it will last. But the data out there is still consistent with the idea that people who have had this are likely to have some level of protection. There are people who had SARS 17 years ago who still have antibodies for it. So the hope is that immune responses to SARS-CoV-2 will be there a long time, but we don't know if that will be the case or not. Longitudinal studies to understand how long patients’ B and T cell responses stay will be important going forward.

UKNow: We’ve heard about antibody treatments that could provide a stopgap until there’s a vaccine. Do you think that is still viable?

Dutch: Yes. We know antibodies to the virus can neutralize it, and that most COVID-19 patients who are checked have neutralizing antibodies afterwards. So the theory with antibody treatment is that it could stop or slow down the infection process very early on in that first week.

What's been more controversial is called convalescent patient serum — that is taking serum from people who've recovered from the virus and then putting it into those who are ill. Some studies have suggested it might be working, but I've also heard others that suggest that it's not doing great — very sick people sometimes have trouble if they've been given serum from others. So that one's still very much an open question, but I think the antibodies that you could give early on that are now being tested definitely represent a viable way to slow the virus or stop the virus before it gets a real foothold.

UKNow: Our first Q & A was in late March. Has anything surprised you about SARS-CoV-2 and the pandemic since then?

Dutch: Some of the additional non-respiratory effects that this virus can cause, like the issues with stroke and the potential for damage to the lungs or heart. And the fact that some people don't recognize they even have symptoms, but they're actually not breathing as well and they’re in a lot more trouble than they realize. The efficiency of spread and percent of people who are asymptomatic has also been surprising.

I will say it's also surprising and worrisome that we have not taken it as seriously, particularly in the last few months, as we should be. I remain concerned that there's a number of people who feel that it's not that dangerous. It’s a challenge because most people have not dealt with a pandemic like this in their lifetime, and at this point we're all getting a little tired of it. But it's been surprising to hear about “COVID parties” or to see pictures of people out in massive groups without masks on, because there are significant concerns about this virus.