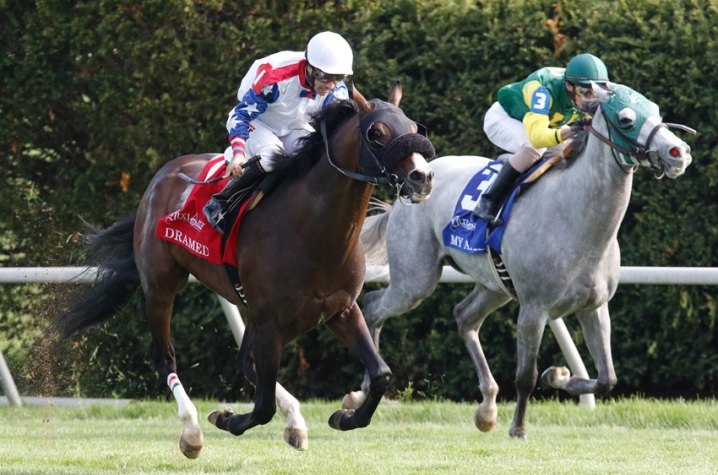 “I don’t think anyone is surprised by the tremendous economic impact Keeneland has on Lexington and Fayette County, Kentucky,” Gov. Steve Beshear said. “The study reinforces for us all the attraction to and the significance of this world-class venue. With Keeneland hosting the Breeders’ Cup World Championships Oct. 30 and 31, its mark on the local and state economy is only going to increase in 2015. I congratulate Bill Thomason and his team for commissioning the report and look forward to Keeneland’s ongoing successes.”

Keeneland annually attracts horsemen and visitors from around the world to Central Kentucky for its Spring and Fall race meets and Thoroughbred auctions. The track conducts racing an average of 32 days a year (15 days in April and 17 days in October). Keeneland will host the 2015 Breeders’ Cup World Championships, a 13-race event worth $26 million to be held Oct. 30-31.

The world’s major Thoroughbred buyers are among participants from nearly every U.S. state and some 50 countries who annually travel to Lexington for the Keeneland sales. In 2014, 6,365 horses were sold for more than $534 million during the 13-day September Yearling Sale, 11-day November Breeding Stock Sale, four-day January Horses of All Ages Sale and one-day April Two-Year-Olds in Training Sale.

Respondents for the study were surveyed during the 2014 Fall Meet and the September and November sales. Based upon those findings, impacts of the Spring Meet and January and April sales were assessed.

The study found that direct spending by visitors during their stay in Lexington while attending the Keeneland race meets and sales generated approximately $351 million in direct economic activity for Fayette County, resulting in a total economic impact for the area of more than $590 million.

“Keeneland has been a special part of the Central Kentucky culture since its inception in 1936,” Keeneland President and CEO Bill Thomason said. “We’ve long known that Keeneland plays an important role in Thoroughbred racing and breeding. It is rewarding to learn that our racing and sales provide not only a means to showcase Lexington to a global audience, but they also serve as a significant economic engine for Fayette County. Keeneland receives such strong local support; we are pleased that the community in turn benefits from our business operations.”

“Lexington is proud to be home to Keeneland Race Course. We love its beauty and the excitement of watching the world’s best Thoroughbreds fly around the track,” Lexington Mayor Jim Gray said. “But when we think about Keeneland we don’t always think about the major impact it has on the local economy. The world’s largest and most important Thoroughbred sales; the horsemen and visitors Keeneland attracts from around the world who stay in our hotels and eat in our restaurants; and later this year, the Breeders Cup World Championships, which will put Lexington on an international stage. It all adds up to another reason to be glad Keeneland is part of our community.”

Major findings from the study include:

Ø  More than half of the 251,574 attendees at the 2014 Fall Meet traveled to Fayette County for the primary purpose of attending the races at Keeneland.

Ø  Visitors traveled from at least 41 states other than Kentucky to attend the Fall Meet.

Ø  More than two-thirds of the 192,000 Kentuckians at the Fall Meet live outside Fayette County and traveled to Lexington for the primary purpose of attending the Fall Meet.

Ø  Direct spending by visitors to the Fall Meet accounted for more than $900,000 in local taxes through the hotel tax and more than $3.9 million in state taxes.

Ø  Approximately 20 percent of groups participating in the September Yearling and November Breeding Stock sales were from outside the U.S. while another 45 percent were from states other than Kentucky.

Ø  Commissions derived from sales involving at least one participant outside Fayette County totaled more than $20 million.

Ø  Sales to buyers outside Kentucky from sellers in Fayette County totaled more than $167 million.

Ø  Participants in the September and November sales spent more than $9 million on food and beverages and more than $6 million on hotel accommodations in Lexington.

Ø  Hotel tax revenue to Fayette County and the state of Kentucky from the September and November sales are both more than $400,000.

Ø  Sales tax on food and beverages during the September and November sales total more than $500,000.

“We are incredibly fortunate to have Keeneland as a signature attraction in our destination,” VisitLex President Mary Quinn Ramer said. “From the world-class racing to the prestigious sales, Keeneland is a key driver of visitation to Lexington and a tremendous supporter of our local hospitality industry. Keeneland’s contribution to the Central Kentucky economy is to be commended.”

“For many years, Keeneland has been a big part of the fabric of our community and region, and its global reach has positively impacted the Bluegrass,” said Commerce Lexington Inc. President and CEO Bob Quick, CCE.  “This study not only reinforces the impact of its sales and race meets from direct spending by visitors, but it’s also clear that our community benefits greatly from the many individuals in the horse industry who have chosen to invest in our region through horse farm ownership, starting a business, development or donating their time and resources.”