LEXINGTON, Ky. (Jan. 28, 2014) — If you came across University of Kentucky theatre senior Dominique Luster in the UK Special Collections library, peering through 1950s-era advertisements, you may not immediately assume she is conducting research. But the Louisville native's project, "The Look of American Beauty from 1950s to the Present" is an example of the many diverse and nontraditional research projects the UK community can experience this spring during the 2014 National Conference on Undergraduate Research (NCUR). The conference will bring nearly 4,000 additional students from across the country to campus when UK hosts the conference April 3-5. Luster will be one of these students presenting her research and creative endeavors in the field of fine arts.

After UK's Special Collections and Archives received a collection of mid-20th century playbills from New York theaters, Luster examined them and looked for common themes and attributes.  She immediately noticed that almost all of the playbills contained lingerie advertisements, and there was something peculiar about them.

"They seemed very current," Luster said. "They were from 60 years ago, so it didn't make sense to me that a lingerie ad I was seeing in a 1952 playbill I could also see in a 2013 Victoria's Secret fashion show."

Luster began researching advertisements from the 1950s, searching for contextual clues regarding socioeconomic and gender-norming traits.  The research process involved the processing of archival materials, researching the content, the donator, the creators, and creating a finding aid on what the collection meant.

"I wanted to find clues about how society in the 1950s looked at, expected, or had a perception of women in these advertisements," Luster said.   "I compared it to advertisements that are prevalent today concerning the same issues. It's interesting that maybe our advertisements and socioeconomic situations have not progressed as much as we have thought in the past 60 years."

Luster knew before she graduated from high school that she wanted to pursue a theater degree, and she chose to attend UK, in part, for its undergraduate research opportunities.

"I actually got accepted into the Chellgren Student Fellows program, which is part of the conglomerate of academic programs on campus," said Luster. "That's how I was first introduced to research."

Since that time, she has presented at other conferences and events (such as the UK Showcase for Undergraduate Scholars). This will be her first time presenting at NCUR.

Diane Snow, director of the UK Office of Undergraduate Research, says that research, especially at NCUR, is not just about the hard sciences.

"People traditionally think of research as only being in a laboratory setting, however research includes anytime a student or faculty member has a burning question that they want to try to find the answer to, and goes to original sources to do that," she said. "We have research going on in the fine arts, in history, in design, as well as other traditional areas like biochemistry, and psychology and physics."

In addition to being a Chellgren Fellow and conducting undergraduate research, Luster is a Fulbright Scholar, Gaines Fellow and student representative for the Gaines Center board, Phi Kappa Phi member, and works for the UK Office of the Provost as a recruitment ambassador. She also participated in an exchange study abroad program in Germany.

She says these experiences have prepared her for the next steps in her academic career, which is to attend graduate school and continue her research on playbills. She has also applied for a Fulbright Award, and would teach English in Germany for a year if accepted.

"Sometimes these opportunities are all about networking and practice," Luster said. "When I say practice, I mean being able to write an abstract, and having the resources around you such as the Office of Undergraduate Research who have the ability to help you develop your abstracts, or any other submission materials you might need. Those offices and resources have been instrumental; I would not have been able to apply for a Fulbright without them."

Note about NCUR
The University Senate has granted permission for all classes to be redirected Thursday, April 3 and Friday, April 4, while NCUR takes place. "Redirection" means, although classes are not officially cancelled, ALL faculty are strongly encouraged to release students from their normal class commitments to participate in NCUR as part of class assignments.  There are many ways for students to participate — from attending a given oral or poster presentation, to volunteering their time and effort at any of the wide variety of events that will comprise the conference. Online sign-up to volunteer will ensure faculty members of their students' participation (please contact volunteer coordinator Jillian Pyatte; jillian.pyatte@uky.edu). For more information about NCUR 2014, visit www.uky.edu/academy/NCUR. 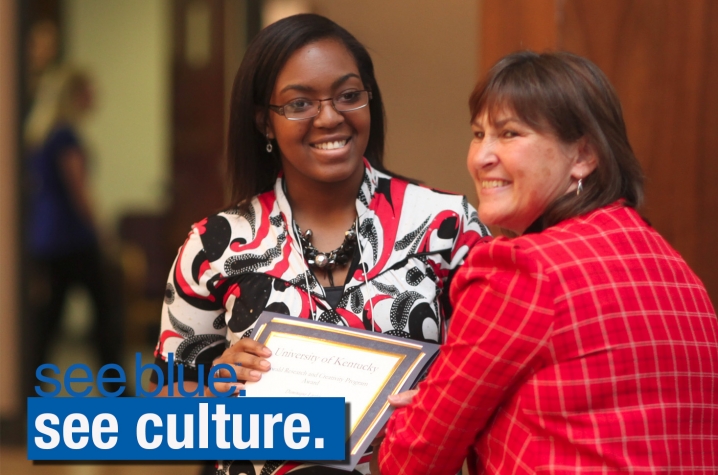