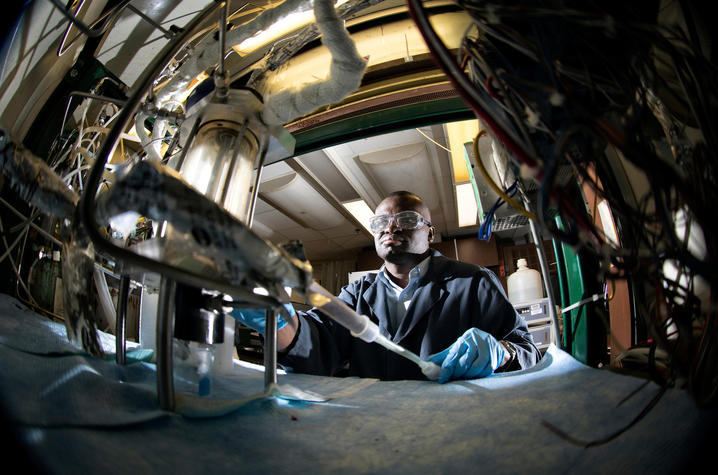 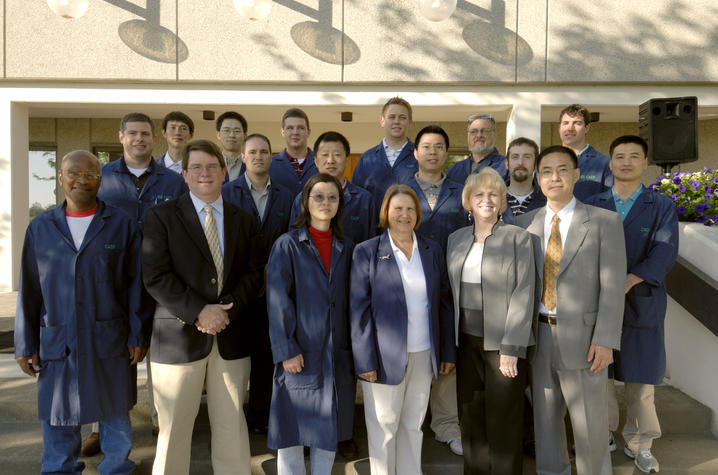 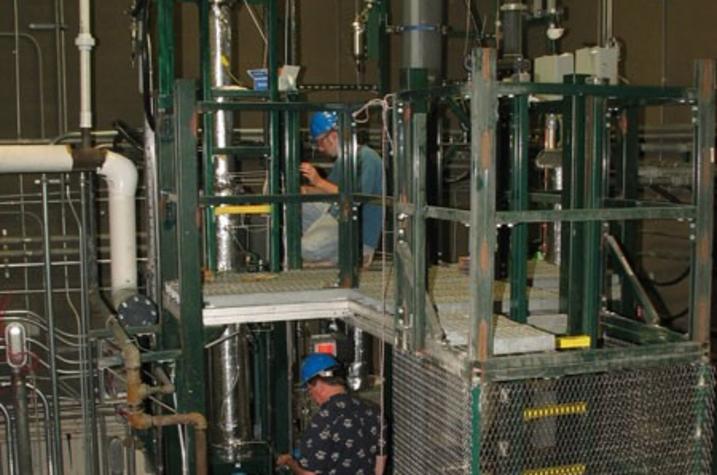 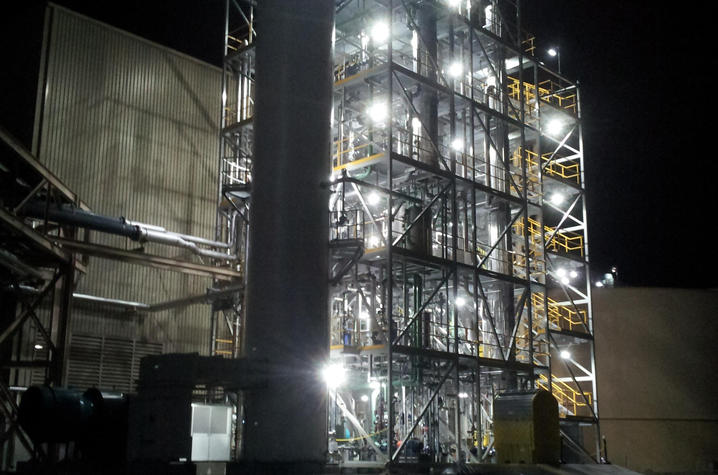 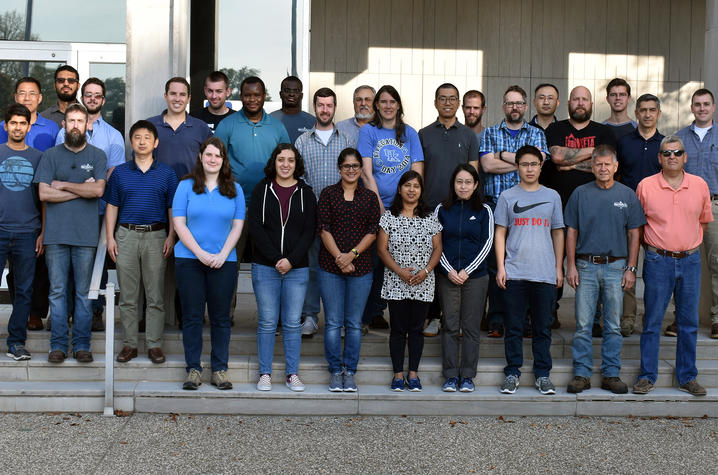 LEXINGTON, Ky. (Jan 12. 2022) — In the mid-2000s, it had become abundantly clear that capturing carbon dioxide was the engineering challenge of our time. No matter the audience — industry leaders, government officials and researchers — there was global consensus around the importance for CO2 capture.

Here in Kentucky, that same message emanated from energy utilities. Researchers at the University of Kentucky Center for Applied Energy Research (CAER) listened and responded with an industrial-governmental-academic consortium that has led to changes in global industrial processes, numerous patents and publications, and scientific breakthroughs that are changing Kentucky’s and the world’s economy.

CAER launched its CO2 capture research program in 2006 with $1.5 million initial investment from Louisville Gas and Electric Company and Kentucky Utilities Company (LG&E and KU). The center’s Power Generation research group, led by Kunlei Liu, Ph.D., associate director for Research at CAER and an associate professor of mechanical engineering in UK’s College of Engineering, began its investigations in a laboratory, working to chemically “grab” carbon dioxide from flue gas.

At that same time, utilities in Kentucky and state government officials were seeking a research collaboration to help learn more about capturing CO2. There were no regulations on carbon dioxide emissions in 2006 but the national conversation had shifted. Changes were coming to the power generation industry.

Thanks to CAER’s longtime relationship with Kentucky’s energy companies and the Kentucky Energy & Environment Cabinet (EEC), a Commonwealth conversation emerged. And the result of that dialogue was a groundbreaking public-private research consortium that brought together resources to help solve this energy imperative.

“That initial investment — those first dollars in — were absolutely critical to building this research program,” said Liu. “I can’t thank all of our partners enough. They showed a faith in us that meant a great deal to me and the entire Power Generation team.”

CAER’s collaborative, industry-centric approach caught the eye of the U.S. Department of Energy (DOE). In fact, CAER was successfully able to leverage that $10.5 million industry investment to generate a total of near $102 million in research funding, including $64.9 million from DOE.

“NETL has developed a strong relationship with CAER and its forward-thinking researchers to move projects from the concept stage toward commercial application,” said José Figueroa, supervisor of NETL’s Carbon Capture Team.

"It's a partnership that's developing the novel technologies needed to remove CO2 from point sources, such as fossil fuel-based power plants and industrial processes, or directly from the atmosphere, with reduced cost and energy penalty," Figueroa said.

The success of CMRG from 2008 to 2018, cannot be simply measured with finances. Research launched in CAER’s laboratories has generated new knowledge and technological advancement around carbon dioxide capture and utilization.

Researchers have generated 118 publications and have had 17 U.S. patents issued for their work with another four pending.

The Power Generation group has also made a major impression on the local business incubation scene. Lexington-based PowerTech Water is a start-up company that spun out of CAER. The company, still based in Lexington and led by two former CAER researchers, has developed advanced carbon electrode technologies to deliver clean water for nonenergy production field use in a sustainable manner at a lower cost and to solve some of the challenges related to the water-energy-food nexus.

The key to CAER’s CO2 capture research is tied, however, to one resource: people. Today, the Power Generation group employs 33 individuals — comprising scientists, engineers, technicians, postdoctoral scholars and students. The group has taken pride in educating the next generation of low-carbon power generation scientists and engineers. Over the years, they have hosted 50 graduate and undergraduate students for experiential education programs as well as 39 postdoctoral scholars.

“We would not have been able to accomplish any of this without the knowledge, skills and dedication of our research team,” said Liu. “They are tenacious. They are committed to solving problems, and they approach their work with great curiosity and creativity.”

Another factor in CAER’s CO2 capture success can be found in their facilities. All projects began in the CAER laboratories. Working closely with industry partners, the center was able to replicate conditions at fossil-fuel power plants, enabling fast and relevant research and development.

But what differentiates CAER is its ability to scale technical innovations. CAER researchers have the unique opportunity to take what is learned at the lab-, bench-, and pilot-scale facilities and test their discoveries alongside industry partners.

One such facility is the CAER small pilot CO2 capture facility (0.7-megawatt electric) in operation at Kentucky Utilities’ E.W. Brown Generating Station in Harrodsburg, Kentucky. In 2014, CAER constructed this post-combustion process to treat flue gas generated from that coal-fired power plant with solid support and commitment from LG&E and KU. This rare facility allowed CAER researchers to integrate its technology and learn important, practical lessons on how to develop a system that could be implemented by utilities.

“The ability to test our technology at an operating power plant is critical to the development of new knowledge,” said Heather Nikolic, research program manager at CAER. “You can learn a lot in a traditional laboratory setting but such learning has its limitations. If you want to determine how something is going to work in a real-life situation, you have to operate in a real-life situation. And I can’t thank our partners at LG&E and KU enough for allowing us to work and learn alongside them. It has been a rewarding partnership.”

“Our company prides itself in ensuring our utilities are keeping up to date with technology innovations worldwide, exploring technologies and partnering in research that has the potential to move our industry forward and advance our efforts toward a sustainable energy future while maintaining our commitment to providing safe, reliable service at a reasonable cost to our customers,” said LG&E and KU Chief Operating Officer Lonnie Bellar. “As the largest utilities in Kentucky, we know how critical this research is and we look forward to continuing to work alongside UK CAER to help further these key energy initiatives.”

In addition to the small pilot-scale facility, CAER is also planning a 10-megawatt electric large pilot facility. CAER has partnered with Wyoming’s Integrated Test Center and two engineering firms, Koch Modular Process Systems (KMPS) and Worley, on a front-end engineering design study to construct and demonstrate its post-combustion CO2 capture process. This will be the final demonstration before commercialization. Recently, a partnership has been established between UK CAER and KMPS to work toward a commercial application of the CAER post-combustion CO2 capture technology.

CAER took a multidisciplinary approach to the carbon dioxide capture question. As Liu noted, “everyone was working on solvent composition to reduce the energy demand needed to capture the CO2” during the early years of research. There was a scientific belief that solvent was the main factor that would drive CO2 capture cost.

“Our philosophy was to balance energy demand and capital investment,” said Liu. “We consider all aspects — equipment sizing, process simplification and integration, heat recovery, the solvent composition and flexible operation.”

The difference is evident today. While other technology developers designed CO2 capture systems that were dependent on specific solvent, the CAER process works with most solvents. This is like having the freedom to buy a lower cost, generic brand. Developing a flexible, malleable system was at the core of the research program.

“The CMRG program at the University of Kentucky CAER is unique in bringing together scientists and engineers to synergistically work together on carbon capture at various stages of technology development,” said Abhoyjit Bhown, EPRI program manager for advanced carbon capture and storage. “We know that carbon capture from large emitters such as fossil-fuel fired power plants is feasible. The research and development being carried out through the collaboration at CMRG will help improve cost and performance of these technologies so that carbon capture is a more viable option for broad deployment in the power industry.”

Next Generation of Carbon Dioxide Capture

Though it is hard to gauge where science and innovation will lead in this field, there is no question that CO2 capture is as relevant today as it was when CAER launched this work in 2006.

Developing carbon-zero or negative emission electricity production continues to be a major scientific challenge that requires collaborative effort from academia, industry and government.

To that end, CAER researchers are applying their technology to direct air capture, removing CO2 directly from the atmosphere, while generating valuable hydrogen.

The center continues to partner with industry leaders, too. In fact, LG&E and KU just announced a new partnership with CAER. The two organizations are collaborating to develop a flexible, net negative CO2 emissions technology that will be directly applicable to natural gas combined cycle power generation while minimizing the associated capital costs of installing this technology. In addition to capturing CO2, the system will produce two value-added streams, hydrogen and oxygen, which can be sold to offset the cost of CO2 capture.

CAER’s Power Generation team is also applying CO2 capture expertise to another scientific challenge of our time: what to do with end-of-life lithium batteries. CAER researchers are working with a major electric vehicle manufacturer to apply the chemical looping technology for the recovery of valuable metals — nickel, cobalt, and lithium — from dead batteries.

When CAER was created by Kentucky’s elected officials, it was charged with developing a research program “to improve existing uses for Kentucky’s fossil fuels and other natural resources.”

What CAER’s Power Generation research team has done for the past 15 years has very much lived up to that mission.

“Working alongside industry to solve challenging problems is a hallmark of our research programs,” said Rodney Andrews, who has served as CAER’s director since 2007. “Our land-grant mission calls on us to solve Kentucky’s problems. And the reality is that when we do that — and we do that well — we solve national and global issues, too.”