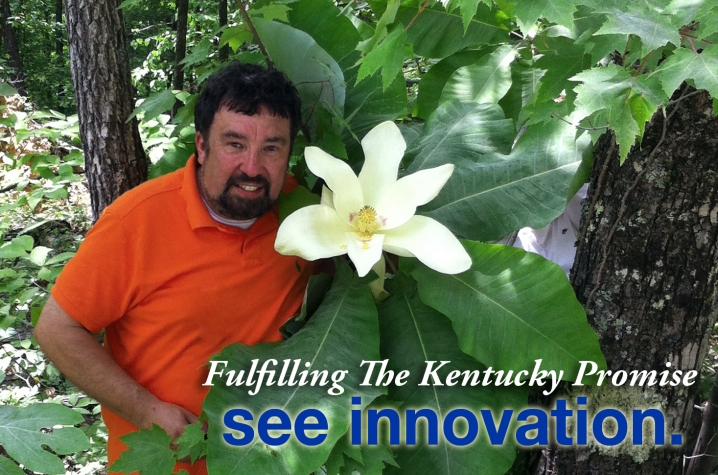 Jurgen Rohr, director of the Division of Drug Discovery in the University of Kentucky College of Pharmacy, finds inspiration for his innovations in nature.

It's not just in his laboratory, where he heads one of the nation's top natural products research programs. You can also see it in his sunlit office, filled with lush green plants and copies of various paintings, featuring landscapes and flowers and other natural scenes.

"I painted some of these myself," Rohr says. "Others, you may recognize. It is probably presumptuous to hang my own paintings beside great masterpieces, I don't know. I have them here because I like them."

He points to one of his own, inspired by the "paint pots" at Yellowstone National Park. These geothermal mudpots — hot and acidic and reeking of rotten eggs from hydrogen sulfide gas — are home to several species of microorganisms that ring the pots with bright splashes of color.

"They're the only things that can live there," Rohr says, his enthusiasm visible. "When the temperature or the pH level changes, one species subsides and another takes over, and that's where you get all of the different colors. I find them very stimulating, visually."

When he's not in the laboratory innovating a new class of anticancer compounds, or in the classroom teaching a new generation of pharmacy leaders, Rohr prefers to be outdoors. He enjoys white-water rafting and kayaking, or hiking and camping in the Daniel Boone National Forest. He can tell you about the best trails in the Red River Gorge, including some that aren't on any maps. He can also tell you a little of the natural history of the area.

"The Appalachian forest is one of the most biologically diverse places on the planet — certainly in the Northern Hemisphere," he says. "As the glaciers moved south during the last great Ice Age, they sort of pushed everything downward. As a result, there is a tremendous concentration of species here."

Rohr shares a photo of himself posing next to one such species, Magnolia macrophylla Michx, a rare bigleaf magnolia tree known for its enormous blossoms and even grander foliage.

"This can be found in the Red River Gorge," he says, "And it is the rarest and most spectacular of all magnolias."

"Nature has devised some very elegant methods for creating many different useful compounds," Rohr says. "Some of these are very difficult, if not impossible, to synthesize from scratch in the laboratory. So most drug discovery and development starts out with natural products."

On a molecular level, Rohr and his colleagues look at gene clusters that code for specific enzymes, and then seek to modify, manipulate and combine these genetic mechanisms to produce different products. The process is known as pathway engineering — or combinatorial biosynthesis, a term Rohr helped to create and popularize in the mid-1990s. It enables researchers, starting with one natural compound, to create a whole library of analogs.

Some of these re-engineered molecules could prove useful as new drugs that are more effective or better tolerated than their forerunners, with fewer side effects. In the world of cancer treatment, that means chemotherapy agents that more selectively target tumor cells while sparing normal, healthy cells from damage. In antibiotics, it means staying a few steps ahead of drug-resistant bacteria in what amounts to a molecular arms race.

Rohr is currently engaged in work with a class of antibiotics that have tumor-inhibiting effects, called aureolic acid (mithromycin) analogs. These have shown promise as a treatment for Ewing's sarcoma, a devastating bone cancer that affects primarily teenagers and young adults. While the lab results are encouraging, Rohr knows that it is a long journey from the bench to the bedside.

"This is one man's work over an entire career, a lifetime," Rohr says, holding up a monograph by a senior natural products researcher from his native Germany. He flips through its pages, a catalog of hundreds of compounds discovered or developed by its author. "Not one of these has been turned into a useful drug yet. Who knows, maybe someday … Of course, it is everybody's dream to discover a new drug that will actually help people and cure disease. But such discoveries are rare, so you cannot make that the only condition for your satisfaction, or you will be disappointed."

Before joining the faculty at UK in 2002, Rohr was assistant and associate professor in the Department of Chemistry of the University of Göttingen, Germany, and associate professor in the Department of Pharmaceutical Sciences of the Medical University of South Carolina in Charleston. He has received continuous NIH funding since 2005. He has published more than 200 peer-reviewed articles and book chapters, and his work has been widely cited.

Since coming to UK, he has built the College of Pharmacy's natural products research group from the ground up, recruiting some of the most talented scientists in the field to join what has become one of the top 10 programs in the country. This year, Rohr received the Provost's Distinguished Service Professor Award in recognition of his academic excellence. Yet, when you ask Rohr about his various accomplishments, he is most likely to talk about his students.

"They really don't know how much I enjoy teaching," he says, giving the sense that he is somehow getting away with something, earning a living by doing what he loves. Then, softly, as though telling a secret: "I get as much out of it as they do."

If success after graduation is any indication, Rohr's students get a lot out of it. Out of the dozens of doctoral students that he has mentored, Rohr estimates that half have gone on to fill leadership positions in industry and academia. Still, when asked about his greatest strength, in terms of his own career, Rohr is quite deferential.

"There are better teachers than me," he says, without a hint of false modesty. "There are more productive researchers, with more funding and more publications. And there are people who have provided more service and greater leadership."

He smiles a little.

"But, maybe, if you take all of these things together, I am probably pretty hard to beat."