LEXINGTON, Ky. (April 29, 2019) – When she was seven years old, Serxhane Ajeti fled with her family from their war-torn home country by foot in the darkness of night. Now she’s preparing to graduate from the University of Kentucky College of Nursing. How did she get here?

“Throughout my whole life, I’ve had help from people all over the world,” she says.

In 1999, the Ajetis were among the thousands that fled during the Kosovo War, one of the conflicts of the Yugoslav Wars. With the continual sound of bombs overhead, the Ajetis knew they had to flee. Through underground tunnels, her family escaped overnight on foot to Macedonia. Though only seven years old at the time, Serxhane has clear memories of their journey.

"There are certain things I remember about the war," said Serxhane. "I remember we were hiding underground for quite some time, just to be able to get away from all the killings and bombs and stuff that were occurring. We were with multiple families underground. I do remember my mom trying to hand me ice cream just so I wouldn't cry and they wouldn't hear anything."

Once they arrived in Macedonia, a North Atlantic Treaty Organization (NATO) refugee camp offered them shelter and food.

“I remember being wet and cold all night and waiting in line for food and blankets,” Serxhane said. “When my parents were offered the opportunity to seek refuge in America, they did it even though they didn’t know much about the country. You’ll do anything to keep your children safe.”

Her family spent six weeks in New Jersey and then settled in Connecticut. Slowly, a sense of normalcy began to enter their lives. Serxhane slept on a real bed for the first time in her memory. She also drank her first Sunny D and played with her first Barbie doll.

“When you’re in a war environment for so long, you forget what things are really like. You can watch the news all day long but not really know what it’s like,” said Serxhane. “But we had so many kind people in Connecticut who really helped us out.”

In 2004, Serxhane’s family made a final move to Nicholasville, Ky., to join family members. When it came to choosing a college, she knew she wanted to stay in the city that had become home.

“I also knew that I wanted to become a nurse because I love helping people. My family and I have had so much kind help that has made such a difference for us,” said Serxhane. “Now I want to be able to help to someone else.”

During her time in the College of Nursing, Serxhane has been supported by another community—students and faculty members who want her to succeed.

“Choosing the UK College of Nursing was one of the best decisions I’ve ever made,” she says. “Today I’m able to graduate because of all the people at the college who have helped me get through."

After graduating in May 2019, Serxhane hopes to work as a nurse in Lexington.

“I love knowing that I’ll be able to make a difference,” she said. “People can show kindness in so many ways, both words and gestures. Here at UK, I’ve learned how to do that.” 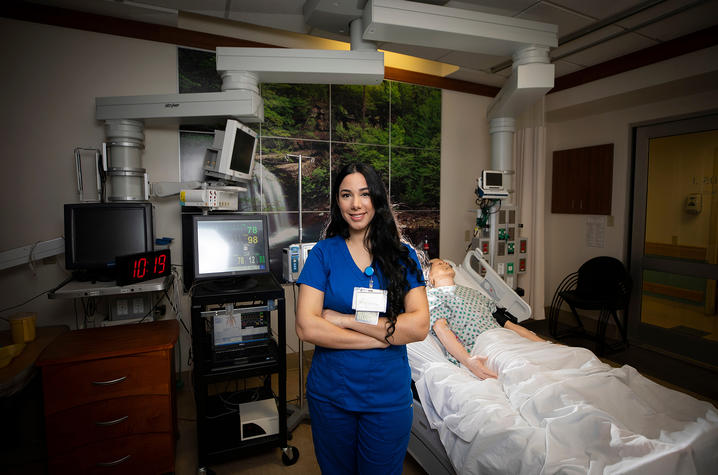 After fleeing war-torn Kosovo, Serxhane Ajeti settled with her family in Kentucky. With her degree in nursing, Serxhane wants to help people they way so many people helped her.