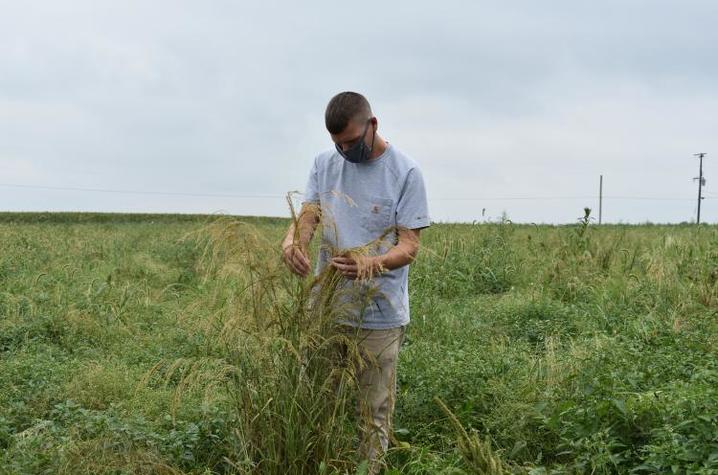 Eric Luteyn, UK student and U.S. Army veteran, studies one of the many varieties of teff in his research plots at UK's Spindletop Research Farm. Photo by Katie Pratt, UK Agricultural Communications.

LEXINGTON, Ky. (Nov. 11, 2020) — Standing in a field of hundreds of varieties of teff at the University of Kentucky Spindletop Research Farm, graduate student Eric Luteyn is at peace studying the differences between the plants. After a decade of military service that ended in a medical discharge, peace is exactly what the disabled veteran needs.

“Plants are peaceful and beautiful,” said Luteyn, a student the UK College of Agriculture, Food and Environment. “It is very soothing to work with plants and learn about all of their capabilities.”

Luteyn was in high school in his hometown of Kalamazoo, Michigan, when terrorists attacked the World Trade Center in 2001. He started community college in Michigan but felt a strong calling to serve his country. In 2006, he joined the Army. During his military career, he had three deployments — to Iraq, Afghanistan and Cuba. While on a 15-month deployment in Iraq, the vehicle he was riding in hit an improvised explosive device, also known as a roadside bomb. The attack left Luteyn with a traumatic brain injury that resulted in headaches and memory loss.

“I went through occupational therapy to maintain the memories that I had and to learn different ways to learn again,” he said.

Luteyn was stationed at Fort Knox when he was medically discharged from the Army. This led him to the University of Kentucky and the College of Agriculture, Food and Environment.

“From the first day of class, I was so excited to be here,” he said. “I’ve enjoyed class every single day.”

In December 2019, Luteyn, who now resides in Richmond with his wife and three children, completed a bachelor’s degree from UK in horticulture and plant and soil sciences.

His interest and enthusiasm for plants and agriculture was evident to Tim Phillips, UK associate professor and plant breeder, who taught Luteyn in some of his undergraduate classes and is now his graduate advisor.

“As a teacher, it is always great when you have a student who is interested in learning, comes to class prepared and asks questions, and Eric is exactly that,” he said.

Luteyn was intrigued by teff, because the ancient cereal grain is gluten free and it has many uses in its native Ethiopia. Ethiopians build their homes and feed livestock from its straw and use the grain for human consumption.

For his master’s thesis, Luteyn is evaluating commercial and native Ethiopian varieties for their trade potential, specifically their seed traits and forage quality and yield. While not widely used in the United States, the grain does have the potential to be used more.

“Teff is a summer-annual grass used by some U.S. farmers for hay for horses and as a summer forage to cut for hay,” Phillips said. “It is a very nutritious forage and contains high levels of calcium, potassium, magnesium, digestible fiber and protein. Other producers also use it as a cover crop or living mulch.”

In addition to his Spindletop plots, Luteyn has research plots at the UK Robinson Center for Appalachian Resource Sustainability in Quicksand. Between the two locations, he has more than 5,000 plots he is evaluating.

“Eric’s dedication to this project has been phenomenal,” Phillips said.

Luteyn hopes to be a plant breeder one day, so he can continue to experience the tranquility he gets from working with them and share their positive attributes with the world through variety development.