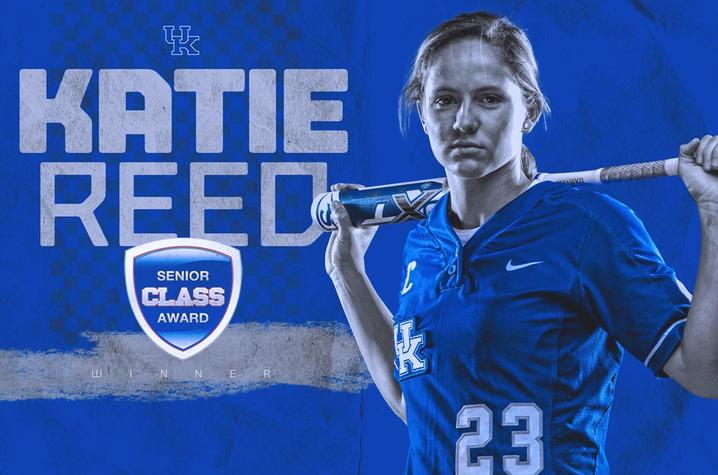 LEXINGTON, Ky. (June 3, 2019) — Kentucky softball shortstop Katie Reed was announced recently as the winner of the 2019 Senior CLASS Award for softball by Premier Sports Management. She is the first UK softball player ever to win the award, and the second Kentucky Wildcat to win, joining Troy Squires in 2018 for baseball.

An acronym for Celebrating Loyalty and Achievement for Staying in School®, the Senior CLASS Award focuses on the total student-athlete and encourages students to use their platform in athletics to make a positive impact as leaders in their communities.

“I am extremely honored to be named the winner of this year’s Senior CLASS Award and am truly humbled to have been named a finalist among the many incredible student-athletes considered for this award,” said Reed, who led the Wildcats to their third consecutive appearance in the NCAA Super Regionals this season. “The University of Kentucky has provided me with so many opportunities to grow not only as an athlete, but also as a student and person, and that is something I will forever be thankful for. There have been so many influential people who have impacted me during my time as a student-athlete at UK. They helped me discover my passion for serving others and challenged me to be active on campus and in the community, specifically through my involvement with our Student-Athlete Advisory Committee. Finding my passion off of the field eventually led to me figuring out my future career path. I hope that I was able to positively impact others with the platform provided by UK Athletics and UK Softball, and I hope to continue to positively impact others as I begin my career.”

Earning her second-consecutive SEC Scholar Athlete of the Year honor this season, Reed was named a second-team All-SEC honoree and to the All-SEC Defensive Team after a season that included 11 multi-run games and a school-record-tying 6-RBI game on March 15. Also named to the All-Region Third Team, Reed added to her already impressive list of accolades, which has included second-team All-SEC and All-SEC Defensive Team honors in 2018 and third-team NFCA All-America and first-team All-SEC honors in 2017.

Off the field, Reed has remained committed to excellence in the classroom as well, maintaining a 4.0 GPA throughout her college career as a human health science (dentistry) major. In addition to being a two-time conference scholar athlete of the year, she also earned an Academic All-District nod this season and first-team CoSIDA Academic All-America honors in 2018.

“I can’t think of a better winner for the Senior CLASS Award than Katie Reed,” said Head Coach Rachel Lawson. “Since stepping foot on campus her freshman year, Katie has been an impact player on the field, but has also dedicated herself to being a great citizen off the field. She is a multi-year captain and has shown great leadership on and off the field all four years. While her play on the field gets the most attention, she has continued to devote herself to helping the community, and she is a perfect example of the term student-athlete. We are all very excited for Katie to be named the Senior CLASS Award winner and look forward to following both her professional careers on the field and in the dental offices for years to come.”

A three-time team captain, Reed made an impact on the local community throughout her career and served as the president of Kentucky’s Student-Athlete Advisory Committee (SAAC) this season. Through her role with SAAC, she developed a relationship with the Special Olympics to make them a partner in Kentucky’s community outreach. Reed also has helped with the Salvation Army and God’s Pantry by making lunches available for underprivileged kids in the Lexington area, and in 2018 she took a trip to Ethiopia and logged 120 community service hours in the Central American region helping assist the needy.

“Katie Reed is an exceptional student-athlete and role model,” said Erik Miner, the award’s executive director. “She’s truly at the top of her game in all facets, and has already at a young age made a positive local and global impact. Our sincere congratulations to Katie, her team and to the University of Kentucky.”