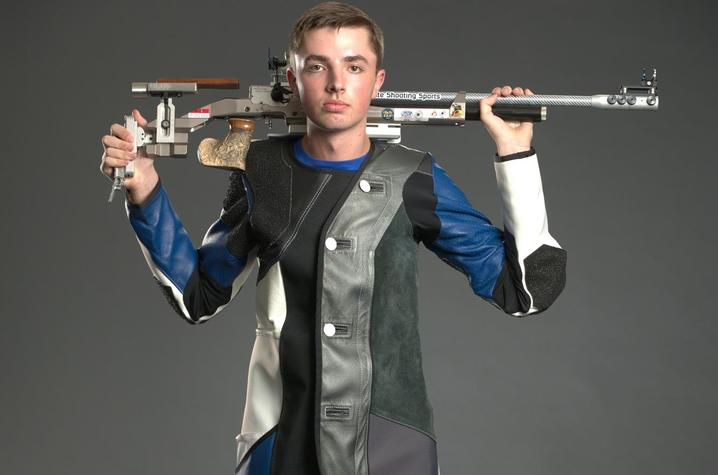 Will Shaner is the first Wildcat to medal and take gold in the 2020 Olympics. Photo by UK Athletics.

TOKYO (July 25, 2021) — University of Kentucky rifle star Will Shaner cemented his place as the best male air rifle shooter in the world Sunday, winning gold in the men's air rifle competition on day two of the 2020 Tokyo Olympics inside the Asaka Shooting Range.

The gold medal is historic for Shaner and the United States as it's the first ever for the Americans in men's air rifle and came after the three-time UK All-American set an Olympic record score in the final.

"Still trying to believe it. It has been a long time, though, growing up in the sport, progressing. To finally have (the gold medal), it's amazing," Shaner told USA Today afterwards. "I just did the same thing as I did there and just worked out the problems I had and just knew that it was going to get me to where I wanted to be."

After the first competition stage of the final, Shaner had a top score of 105.8 and he never looked back, securing the Olympic record with a 251.6. All told, Shaner fired 82 shots Sunday with all of them being on target. His lowest score was a 10.1.

Shaner posted the third-best qualifying score to earn a spot in the final, shooting a 630.8. Shaner sealed his spot in the final with an impressive fifth series, earning a 106.2 score. The 106+ score in the fifth series tied the third highest series score of the qualification round. He was one of six competitors in the entire competition to post a score of 106 or higher in a series.

Shaner, a senior from Colorado Springs, Colorado, majoring in economics in the Gatton College of Business and Economics, is one of two Wildcats competing for USA Shooting at the summer games. UK star Mary Tucker made her Olympic debut on day one of the games, finishing sixth overall in the women's air rifle final. Shaner and Tucker will both compete in the air rifle mixed team event on July 27, while Tucker will also compete in the women's three-position smallbore on July 31.

In his final tune up before heading to Tokyo for the Olympics in late June, Shaner performed flawlessly at the ISSF World Cup in Croatia, winning the gold medal in men's air rifle 10 meters. Shaner led from start to finish at the event, finishing with 250.5 points. The event took place at Pampas Shooting Range. Shiner also shined at the 2021 National Junior Olympic Championships, winning gold in smallbore and silver in air rifle.

Former Wildcat Henrik Larsen competed for Norway in the event, finishing with the 11th-best qualifying score of 627.4. The high mark was just outside of him earning a spot in the eight-person final.

In his only season in Lexington, Larsen won the individual air rifle national title at the 2018 NCAA Championships and led the Wildcats to the their second national championship. Throughout the season, Larsen posted the highest aggregate score of any Wildcat in every match. In his lone year in Lexington he set school records across the board in smallbore, aggregate, and air rifle and was named a first team All-American in all three disciplines.