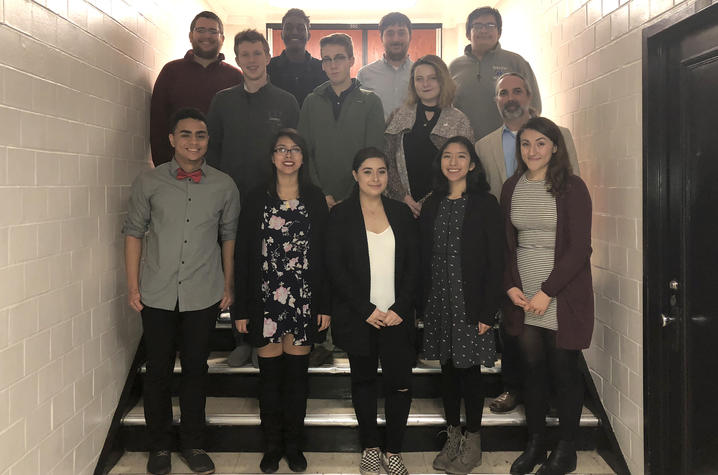 LEXINGTON, Ky. (Dec. 18, 2017) — The University of Kentucky Debate Team is no stranger to success and the group's hard work is being rewarded. The team is currently ranked as one of the nation’s best teams with the sophomore duo of Dan Bannister and Anthony Trufanov earning a number three ranking from the American Debate Association.

The duo is also ranked fourth in the nation on the College Debate Ratings website with the senior pair of Amar Adam and Theo Noparstak close behind at number 14 in the nation.

The entire team gave a strong performance during the recent tournament at Wake Forest University, which stands as the nation’s largest first semester tournament hosting more than 130 teams from 23 states. Bannister and Trufanov lost a close 2-1 decision to Emory University in the final four while Adam and Noparstak reached the quarterfinals and fell to Harvard University.

Bannister and Trufanov were invited to participate in the prestigious Dartmouth Round Robin, which takes place in January. They are noted as the only team of sophomores competing in the tournament.

The Dartmouth Round Robin is the most exclusive tournament of the year, with only the top seven teams competing. Other teams participating include Harvard, University of Kansas, Northwestern, Emory, Wake Forest and University of Nevada, Las Vegas. This will be UK’s second time competing in three years.

The UK Debate Team has established a noteworthy record of success in some of the nation’s most recognized tournaments. In 1986, UK won the National Debate Tournament. Since then, the team reached the semifinals of the National Debate Tournament seven times and was ranked seventh overall with 24 first round teams. In 1994, UK won the coveted Copeland Award, which recognizes the team for the best regular season record. In addition, UK has reached final rounds of every major invitational tournament, including Dartmouth, Harvard, Northwestern and Emory.

David Arnett, the director of the UK Debate Team, has been with Kentucky since 2010. He is the 2015 American Debate Association Coach of the Year and has high expectations for this year’s squad.

“From a competitive standpoint this was the strongest first semester we’ve had in my time at Kentucky. It is a testament to the countless hours of preparation the team puts in. It also speaks to what can be accomplished with a group that genuinely cares for each other and puts the team first,” Arnett said.

In addition to being the director of the UK Debate Team, Arnett also overseas five national college and high school tournaments including the Tournament of Champions, which hosts more than 700 participants from 35 states and four countries.

Arnett says the team’s competitiveness is not the only positive that should be recognized. He added, “Thanks to a very aggressive fundraising campaign, we’ve been able to increase the number of students attending tournaments. Debate is a powerful tool for empowering young people and the more students we can impact the better.”

The UK Debate Team’s next tournament takes place in January at the U.S. Naval Academy.

The UK Debate Team is housed in the College of Communication and Information. You can keep up with the team at http://ci.uky.edu/UKDebate.