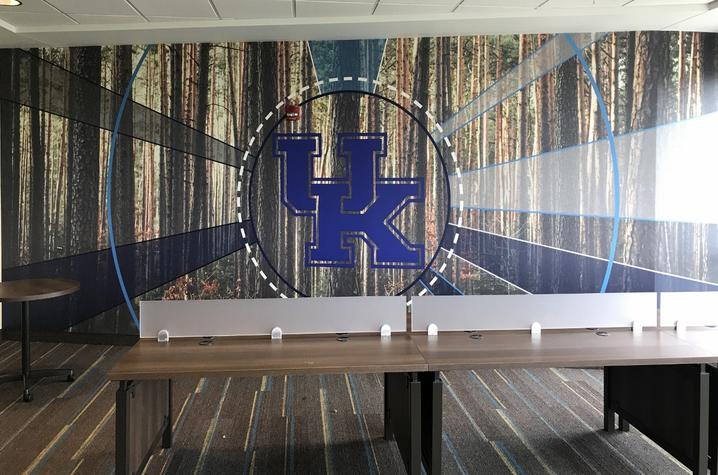 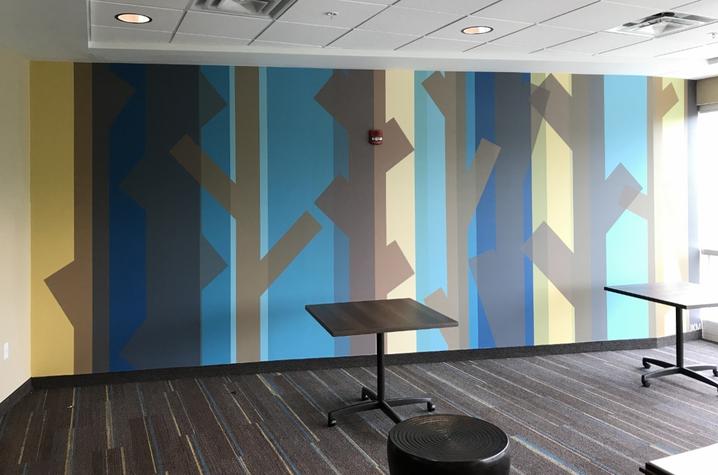 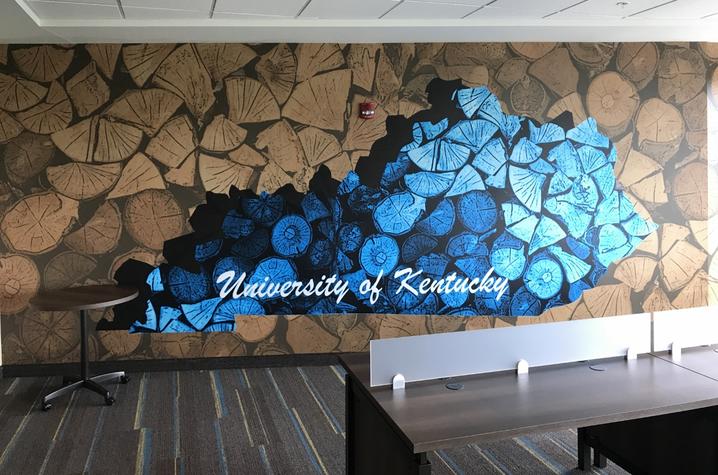 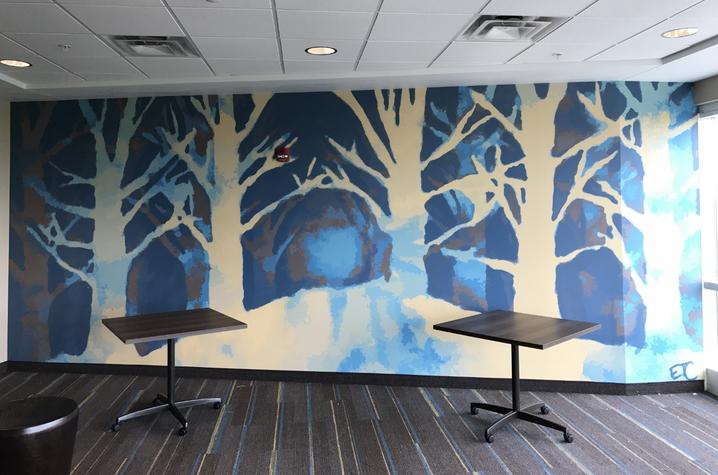 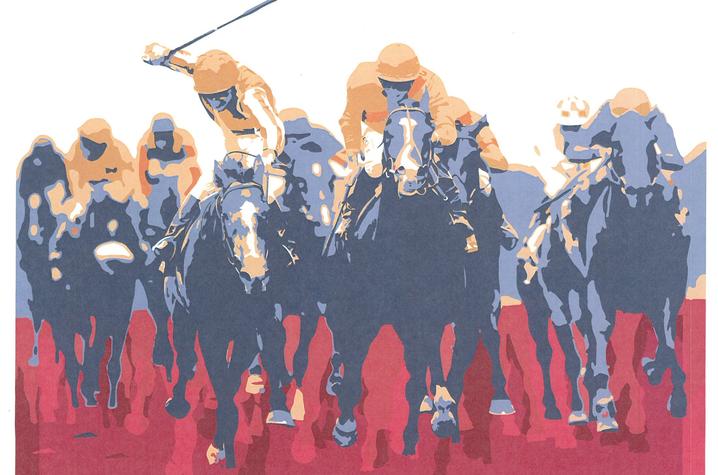 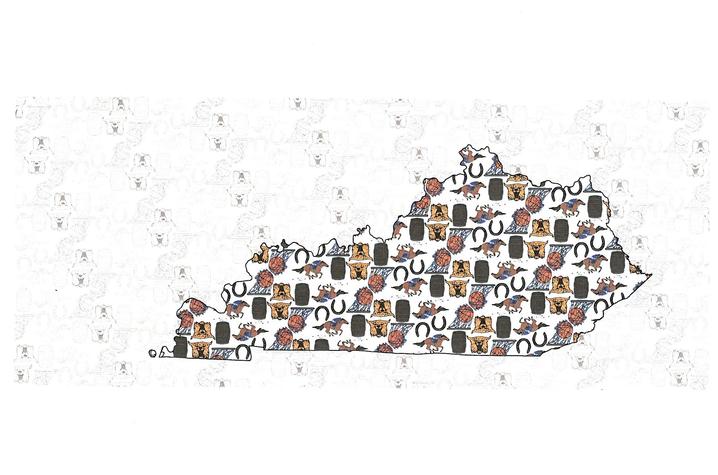 LEXINGTON, Ky. (Aug. 2, 2017) — Six University of Kentucky students were recently selected by a panel of judges from UK Housing to have their artwork featured in two new campus residence halls — Lewis Hall and University Flats. Students were given specific colors and themes and instructed to submit one or more designs to be judged.

Lewis Hall will be home to the Lewis Honors College and University Flats will house graduate students and upperclassmen.

Emily Corner, who is now working at an architectural firm in Madison, Wisconsin, found the design competition to be a great chance to show what she learned during her undergraduate years at UK and build her portfolio. Her mural connects Kentucky’s landscape and the built environment of the campus community. The forest depicted in her design represents constant rebirth and potential for growth at the university, an illustration of how students living in the residence halls are being introduced to a whole new world of possibilities. The monochromatic color scheme of the mural symbolizes UK and serves as a reminder that goals can be achieved with the support of the campus community.

Corner is honored to have her work be a part of campus and to give back to her fellow Wildcats. “I just hope people can catch a glimpse of the mural and feel a bit more relaxed. I hope it can become a part of their day-to-day life in their new UK home.”

This is the second mural of Lauren Delvanthal’s selected for a UK residence hall. Delvanthal, who finished her bachelor’s degree in architecture this May, says the experience is rewarding in many ways.

“I was interested in submitting a proposal because it is amazing to see your work at full scale. I have another mural in Holmes Hall, and the response from my friends who live there or have visited is amazing. To be able to share your art with a large audience is special.”

Being from Central Kentucky and having a familiarity with the three “B’s” of Kentucky — bourbon, basketball and the bluegrass — Delvanthal decided to incorporate easily recognizable symbols like the Wildcat, a basketball hoop, a bourbon barrel, a race horse and a horseshoe in her design. She created a pattern with these symbols and placed the outline of the state over it. Delvanthal then highlighted those symbols that fell within the outline with color to create a strong graphic quality that would make viewers look a little closer.

“I hope viewers will look at this (mural) and feel proud to be living in a state rich with traditions and beauty. I hope this reminds viewers what the Bluegrass State offers to those willing to explore,” Delvanthal said.

Chris Mancuso, president of UK’s chapter of American Institute of Architecture Students, said he let the design of the building lead him as he developed his mural concept, coordinating his ideas with the colors and styles presented in the foyer. He then looked at different graphics he found interesting and using Photoshop overlapped his digital design on an image from nature, which created a powerful feeling and contrast.

With the mural going in a residence hall where people go to get away from classwork, Mancuso said he wanted to design something peaceful and not too distracting. “I hope they find the mural to be calming and relaxing and something that makes the space more enjoyable. I want it to remind them of nature and how easy it is to forget how big the world is. And, I want it to remind them that they are part of a large community here at UK.”

When asked about the design competition, Jessica Moore said she was excited with the opportunity the contest gave students to show the possibilities of using graphic design in a residential setting, among other things. “As an interior design major I am really interested in how graphic design and interior design can intersect, and this was a good opportunity for that. I also was excited about the idea of having an impact on the design of a building on campus.”

Moore’s design, like Mancuso’s, references nature but in a completely graphic representation. She wanted to create a simple design that was visually compelling but not too overwhelming to be on the large scale of a wall. Moore’s mural incorporates abstracted natural elements and colors that reflect UK, all created with the new University Flats' color scheme and atmosphere kept in mind. The overlapping stripes and tree shapes are simplistic but visually interesting and were selected to add positively to the space.

Jacqueline Sanchez, who created her design over the winter break, also chose a woodsy theme for her mural. She described her concept as “simple and rustic.” While reviewing the files provided by UK Housing, Sanchez said the words “rustic,” “blue” and “Kentucky” were the first thoughts that came to mind. From there she began to sketch a couple of ideas that involved the silhouette of the state, and added wood logs into the design.

Sanchez is looking forward to seeing her work this fall. “I think it is an amazing privilege; I am so excited about all the people that will get to see it and hopefully enjoy it. I feel extremely lucky and honored, and I can’t wait to see it up in University Flats!”

Sarah Zezima also wanted to employ her graphic design skills to develop a mural with cultural elements native to the area. She chose something Lexington is known for worldwide — thoroughbred horses. Her mural depicts a field of racehorses in action.

“I wanted to immerse students into the rich history and culture of Lexington by creating a horse racing graphic,” Zezima said. “This mural shows the fierce energy from the track. It's my hope to give off Lexington’s unique horse culture.”

The talented young designers were excited to get a chance to leave their own creative mark on the university, and they welcomed the opportunity to compete for individual $500 cash prizes from UK housing partner, Education Realty Trust (EdR).

“I would say I am honored and humbled,” Mancuso said. “I honestly had no idea how great it would feel to realize that someone might actually look at my work, especially here at UK, and be able to recognize that it was one of their classmates who created it.”