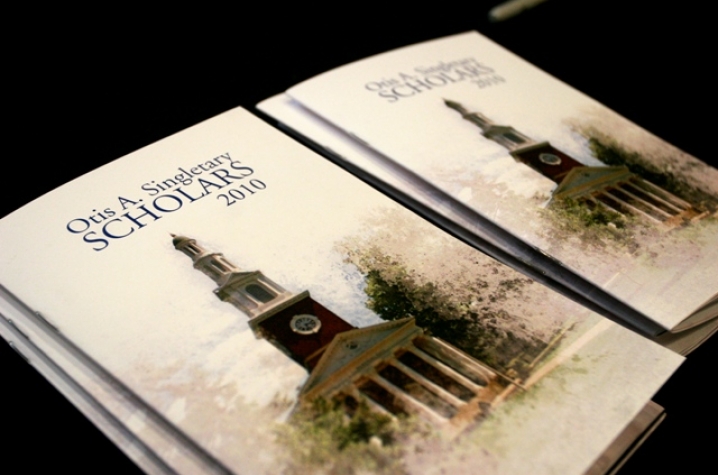 LEXINGTON, Ky. (Sept. 17, 2010) – During his remarks at the State of the University Address, UK President Lee T. Todd Jr. reflected on the innovative spirit of the campus. He also recognized some of UK’s newest innovative thinkers and scholars – the 25th class of Otis A. Singletary Scholars.

The Singletary Scholarship is the most prestigious four-year scholarship awarded by the University of Kentucky. The scholarship, which is named for former UK President Otis A. Singletary, began in 1985 and covers the full cost of tuition, room and board, and a personal stipend for four years of undergraduate study. The scholarship is valued at approximately $60,000.

The fall 2010 Singletary Scholars were selected from 637 eligible candidates and include three National Merit Finalists, 15 valedictorians and 20 Kentucky Governor’s Scholars.

“This year marks the 25th anniversary of our prestigious Singletary Scholars program, and I am excited to once again welcome our new scholars to campus,” said President Todd. “For the past 25 years, our Singletary Scholars have set the academic tone for the university, and I am confident this cohort of scholars will do the same.”

To be eligible, students must score 31 or higher on the American College Test (ACT) or 1360 combined math and critical reading scores on the Scholastic Aptitude Test (SAT), and have a minimum high school grade point average of 3.75. The selection committee also considers extracurricular activities, work and volunteer responsibilities, leadership involvement, a written essay and a personal interview.