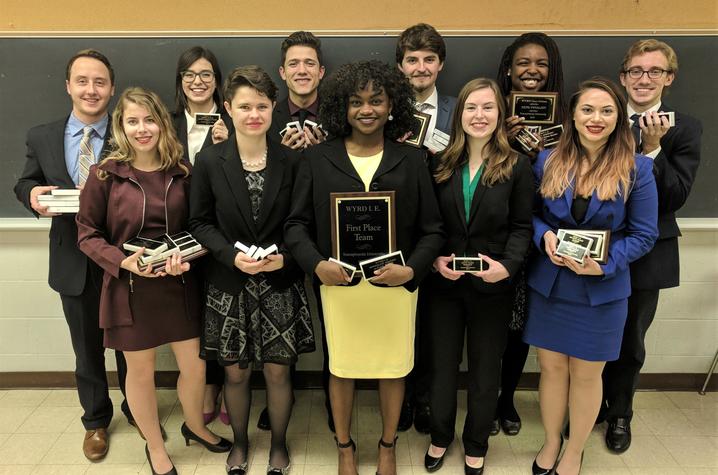 The tournament at Transylvania University allowed competitors to choose from 16 different public speaking events. Students from UK earned at least one of the top three positions in 13 of these categories including winning communication analysis, extemporaneous speaking, informative speaking, persuasive speaking, poetry interpretation and prose interpretation. Students from UK also won four of the five pentathlon awards for success in individual sweepstakes and qualified another nine events for nationals.

“This was a great way to end our fall season,” said Timothy Bill, director of the team. “Now we finish our finals and begin the last of our preparations for nationals in the spring."

Over winter break, students will revise current speeches, polish performances and prepare a few new events for the spring semester. By the time the team attends nationals in March, students will be regularly performing nearly 60 speech events in addition to the team’s debate entries.

A full list of awards won by UK students at the tournament can be found here.

The University of Kentucky Speech and Debate Team is committed to training the next generation of civic leaders who are passionate about effecting change in their communities. The team’s next competition will be the Bulldog Battle Invitational held Jan. 19-20, at Butler University in Indianapolis, Indiana. UK Speech and Debate is a student organization in the School of Information Science in the College of Communication and Information. To find out more, please visit the team’s website www.ukforensics.com.