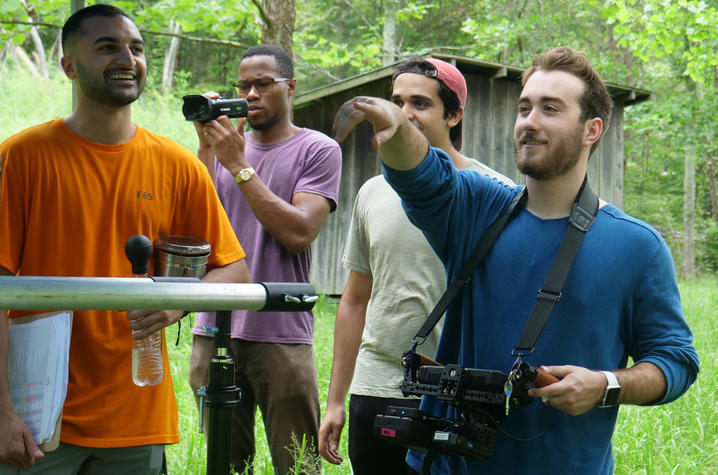 Matthew Dunlap (right) and his crew work on the set of "Burning In Trial" on location in the Red River Gorge.

LEXINGTON, Ky. (April 15, 2022) — While it can take years for aspiring filmmakers to see their first film’s premiere, one University of Kentucky College of Communication and Information senior got to live out this dream before even graduating — and that’s just the beginning of his budding entertainment media career, as he already has a position lined up after graduation.

Matthew Dunlap, a senior media arts and studies major (MAS), premiered his film at UK’s Worsham Cinema on Dec. 3, 2021. The 27-minute motion picture titled “Burning in Trial” is a thriller featuring two strangers stuck in purgatory who lose their memories while trying to survive the horrors of the outside world. While this was a short film, it was Dunlap’s biggest project to date with him serving as writer, producer, director and editor.

“When I graduate in May, I wanted to have something I was really proud of,” Dunlap said. “I wanted to use all my resources and kind of go for it. And that’s what I did.”

Dunlap developed his love for filmmaking at a young age. He grew up acting out plays and recording music videos and skits with his sister and cousins. It wasn’t until high school though when he was making films with his friends that he decided to turn his passion into a career.

He enrolled at UK as an MAS major to get as much experience in media as possible. During his freshman year, he also joined the UK Film Club. Throughout his time in college, he made and helped create many films, from thrillers and comedies to dramas and documentaries. He also made tons of film junkie friends.

It was with one of these friends that Dunlap first brainstormed “Burning in Trial.” The idea behind the quarantine-style horror plot was birthed right before COVID-19 hit, but the script for the film took about a year to finalize. After putting his vision to paper, it took long hours, lots of hard work and a little bit of luck for Dunlap’s film to come to fruition.

The filming process totaled four days over the course of two weekends. About 20 of Dunlap’s friends formed the production crew, lending free helping hands. The male lead in the film was recruited by one of these friends, and his family owned the land and abandoned house in Red River Gorge that served as the setting for the film. Even Dunlap’s cousin, who works in sound production, got a piece of the action by making the film’s music.

“I kind of had everyone helping out where they could so I could spread the wealth,” Dunlap said. “That’s what I love so much about all my friends because I surround myself with people who love film as much as I do. We all just love making it, and we know that by making it we’ll just only get better, so we all just help each other out for free.”

Although he got as much help as he could, it took him five months to edit the movie together on his own. For nearly five hours a day over the course of a semester, he edited over 600 gigabytes of footage, including sound effects, color and visual effects. It was the lengthiest and most challenging part of the project with a big learning curve, but the result is something he’s proud of.

The premiere of his film in front of all his family and friends was a moment Dunlap described as surreal, overwhelming and undoubtedly his favorite part of college. The positive reactions have only helped to encourage him to continue pursuing film. Thankfully for him, that isn’t far from his future.

While searching for career advice in a Los Angeles film industry Reddit community, Dunlap was presented with a job recommendation and free reference from an employee at Deluxe. The Academy Award-winning company is an international, multidisciplinary service provider in the entertainment media industry.

Jumping at the opportunity, Dunlap managed to secure himself a remote position with the company that he’ll start soon after graduating. He has been assigned to Deluxe’s Disney Team as an account coordinator. He will schedule talks between studio executives who work on subtitles and dubbing Disney+ content for other countries.

Although this job isn’t quite yet seeing Dunlap in another role of creative control, he’s excited to get his foot in the door. It’s his hope that later in his career he’ll be back in the director’s chair, but for now, he’s looking forward to seeing where this takes him.

“There are so many different paths you can take,” Dunlap said. “I just want to make stuff that I love and make it with people I love, and hopefully, other people will love it too.”

To watch a trailer of Burning In Trial, visit https://www.youtube.com/watch?v=tXXXhjjJe-c.