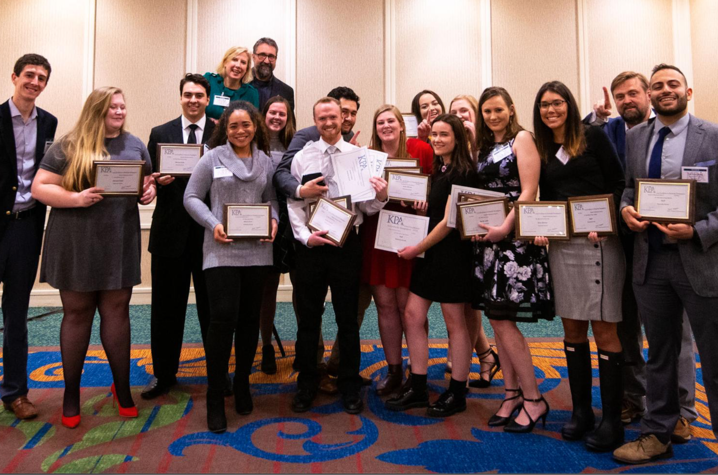 The Kentucky Kernel staff celebrate winning the KPA General Excellence Award for Large Collegiate Papers in January 2020, the last time they were able to celebrate awards together before the pandemic began.

LEXINGTON, Ky. (Aug. 27, 2021) — The COVID-19 pandemic saw professional journalists worldwide working tirelessly to disseminate timely, consequential information to the public. This responsibility was just as weighty for student journalists. But despite the mounting pressure, University of Kentucky's Kentucky Kernel Media reigned triumphant over a trying year, raking in several state and national awards. Overall, the media organization and its staff won nearly 100 awards during the 2020-2021 school year.

For the Kentucky Kernel and KRNL Lifestyle + Fashion, the tone for this past school year was set on March 6, 2020. That day, Natalie Parks was selected as the editor-in-chief for the Kernel while Rachael Courtney was selected for KRNL. But it was also the day that the coronavirus hit Kentucky.

“The board of directors was selecting the new editor and the first COVID-19 case in Kentucky was announced while we were in the middle of selecting,” Student Media Advisor Ryan Craig said. “Basically, it was hanging over us like a cloud from the beginning of this current group, especially for Natalie and Rachael.”

Rick Childress, 2019-2020 Kernel editor-in-chief, had rushed out of that selection meeting to cover the press conference announcing the case. He said the moment was “earth shattering” and the following months “absurd.”

Parks said she felt distinctly that “everything from here on out would be different.” And her prediction would come to pass.

Within a couple weeks, Childress’ former staff-filled newsroom would be empty, and he would have to virtually pass on his editorial responsibilities and knowledge to Parks. The weekly newspaper would also have its last print edition of the semester before going virtual as everything and everyone soon went on lockdown.

Luckily for KRNL, the staff had sent their Spring 2020 magazine to print before the lockdown started. Courtney was also fortunate to have been managing editor for Allie King, her predecessor. King said that made Courtney well-prepared for her new role, though that did not make her job any easier.

The summer before the Fall 2020 semester was full of uncertainties for Parks and Courtney, filled with questions of how to operate their staffs virtually and if, when and how the university would resume in-person operations. And come the fall semester with CDC-compliant restrictions, Kentucky Kernel Media would face COVID-19 scares, absent staffers and the universally felt frustrations associated with adapting to online life. And challenges often faced by college media students, like limited media access and resources, were only worsened by the pandemic.

Both Parks and Courtney agree that one of the hardest parts of their tenure was forming and keeping a sense of camaraderie among the staff. Kentucky Kernel Media is known among its alumni to host several social functions during the year, whether that be a summer staff retreat, semester tabling event or holiday office party. But while Courtney thought her KRNL staff were able to bond well via Zoom, Parks said that she and her Kernel staff missed out on “many of the things that make college journalism worth it.”

However, these challenges did not come without reward. Beginning in October 2020 and continuing into July 2021, Kentucky Kernel Media’s multitude of state, national and international awards started rolling in. Though most of these awards were earned during Childress and King’s tenures, they provided a much-needed morale boost and motivator for Parks and Courtney’s staffs.

For the 2019-2020 Associated Collegiate Press Pacemaker Awards, commonly referred to as the “Pulitzer Prize” of college journalism:

For the 2019-2020 College Photographer of the Year Awards held in November, three Kernel staffers each won an Award of Excellence for the respective categories of sports portfolio, sports action and sports feature.

Also in November, the Kentucky Kernel received the James Madison Award, awarded by the Scripps Howard First Amendment Center in the School of Journalism and Media at the UK College of Communication and Information in recognition of the organization’s outstanding contribution to the First Amendment.

For the 2019-2020 Kentucky Press Association Awards held in February 2021, the Kernel won two Certificates of Merit and 45 awards, sweeping seven categories and taking home 18 first place finishes. Parks was also named Student Journalist of the Year in addition to receiving the Jon Fleischaker Freedom of Information award, the latter of which was also awarded to Craig.

At the 2021 American Advertising Awards held in March, KRNL’s Kendall Boron won a Golden Addy for her work with the organization.

Finally, in July 2021, the Associated Collegiate Press named the Kentucky Kernel a Top 100 Pacemaker Winner and aims to honor the organization during the ACP centennial celebration planned for October 2021 in New Orleans.

“Awards are far from everything, but they’re certainly nice confidence boosters,” Childress said. “They’re a tried and true stamp that you’re doing a good job and I couldn’t help but feel extremely proud watching our reporters, photographers and designers reel in award after award. It was one thing for me to tell someone they did a good job, but when someone got national or state recognition, then they really knew it and so did everyone else.”

Besides awards, the 2020-2021 class of Kernelites proved in other ways that they could uphold the tradition of strong journalism despite the pandemic. Though the Kernel staff never met in person and only allowed one staffer at a time in the newsroom, they continued their pre-pandemic weekly printed papers, even increasing the number of pages in some editions, while bolstering their electronic newsletter. The KRNL staff also expanded its multimedia coverage to include regular podcasts and video content while producing two magazines that Craig said were the best in the country college-wise.

“I’ve talked to many advisors across the country, and we all agree that the adaptations students had to make to ensure each publication, whether a campus newspaper or special publication, came out on time and successfully was outstanding,” Assistant Student Media Advisor May May Barton said. “Kernel/KRNL students were focused, determined and dedicated to putting out the best product for the campus and the community.”

Although the year was what Parks called “the opposite of the ideal college journalism experience,” she also thought the Kernel surviving through the year was the “height of success.” She and Courtney both hope for their successors, Rayleigh Deaton for the Kernel and Allie Diggs for KRNL, to be able to get back in the office, make lasting memories and create the top-tier content they know Kentucky Kernel Media is capable of.

“The Kentucky Kernel and KRNL have a mission, and that mission is to cover the campus of the University of Kentucky fairly, equitably and, without a doubt, to tell the stories that aren’t being told,” Craig said. “This is a laboratory, we are learning, we are trying to uplift these students and make them realize their potential as journalists. And even if they don’t work in journalism, if they do something else, if they major in something else, their time working for the Kernel or KRNL will make their lives better and also make them see the world differently, and I think that’s where we can really excel.”