Watch the trailer for "Black in Blue" above.

LEXINGTON, Ky. (April 20, 2020) — "Black in Blue," the feature-length documentary film that tells the untold story of the four University of Kentucky football players who broke the color line in the Southeastern Conference (SEC), will receive its broadcast premiere on Kentucky Educational Television at 9 p.m. tonight (Monday), April 20.

In addition to the April 20 broadcast, the documentary will air on KET and KETKY seven more times over the next two weeks. Viewers can find those air dates here. The film will also be available to public television stations all across America. Viewers outside Kentucky should contact their local PBS station for more information.

"Black in Blue" tells a remarkable story of triumph, tragedy and redemption. A little over 50 years ago, every athlete in every sport at every school in the SEC was white. On Sept. 30, 1967, that changed forever when UK football player Nate Northington entered the game against the Mississippi Rebels and became the first black athlete in the SEC. But Northington’s breakthrough was over-shadowed by tragedy. That morning he learned that his best friend, teammate and fellow civil rights pioneer, Greg Page, had died.

A despondent Northington left the team and UK, but two other black players at Kentucky, Wilbur Hackett and Houston Hogg, picked up the baton of change, facing racism on trips into the South. Ultimately, their courage and the bonds of loyalty between black and white teammates would make Saturdays in the South the most integrated day of the week.

The four remarkable men who broke the color line —​ Northington, Page, Houston Hogg and Wilbur Hackett —​ are now honored in a statue that stands outside the UK Football training facility in Lexington. However they are not the only heroes of "Black in Blue." Indeed, it was no fluke that this remarkable achievement happened at Kentucky, where the student newspaper, the university board, the president, the coach and even the governor supported the integration of the SEC, which was at the time the symbol and substance of white supremacy in the South.

"Black in Blue" was directed by Academy Award-winning filmmaker and UK graduate Paul Wagner and executive produced by former UK quarterback Paul Karem. The film has an original gospel music score by Kentucky’s own Linkin’ Bridge.

"Black in Blue" is produced by American Focus, a nonprofit organization dedicated to the creation of films about important stories in American life. 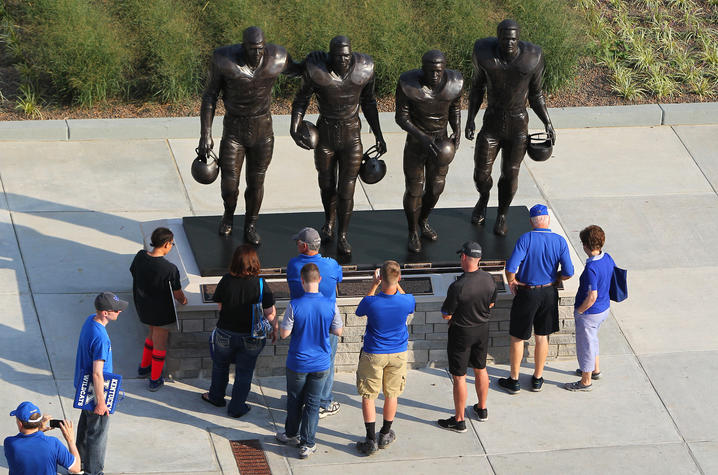