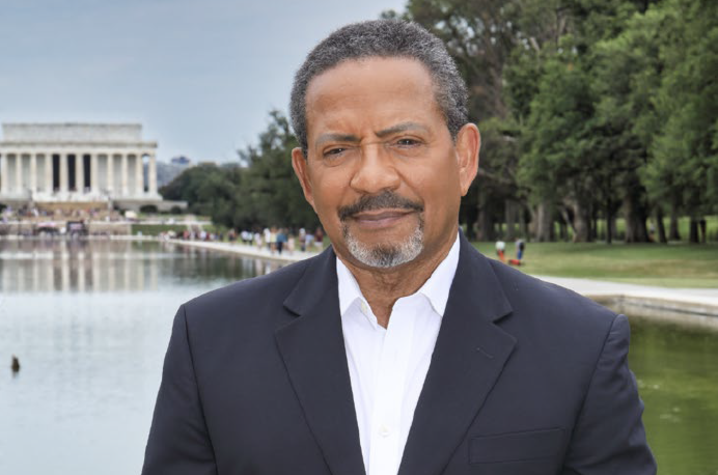 The College of Communication and Information Dean's Office, the CI Diversity, Equity and Inclusion Committee, the Association of Black Journalists Bluegrass student chapter and the School of Journalism and Media welcome Johnson to UK. Johnson, who is active in the National Association of Black Journalists and a 2020 inductee to the Kentucky Journalism Hall of Fame, will also provide a master class for student members of the ABJ.

The title “Surviving Deep Waters” stems from Johnson’s childhood pastime of grabbing low-hanging tree branches that edged the Ohio River, then swinging out to drop into the water below — despite not knowing how to swim. Tenaciously Johnson paddled back to shore, unknowingly developing lessons for adulthood. From recalling his mother's experience living in an alley in Louisville to his relocating to Cincinnati to join the priesthood, Johnson will share the struggles he endured growing up in segregated Louisville, Kentucky, and the lessons and triumphs that ensued. Johnson shares other defining moments in his forthcoming memoir of the same title — to be released Feb. 22.

“I’m not a victim of anything. Like my mother, I am a survivor of a lot of things,” Johnson says.  “Surviving Deep Waters is the book that I wish had been there for me to read when I started out as a journalist, but it should be required reading for any minority starting out in a majority work environment. My mother and great grandmother built me for this.”

Like Johnson, Angelo B. Henderson was a Louisville native. Henderson — a 1985 University of Kentucky graduate — was a reporter for The Detroit News, The Courier-Journal and the St. Petersburg Times, and a member of the National Association of Black Journalists. As deputy Detroit bureau chief of The Wall Street Journal, Henderson won the 1999 Pulitzer Prize. In 2005, he was inducted into the University of Kentucky Alumni Hall of Fame and posthumously inducted into the Kentucky Journalism Hall of Fame in 2016. The Angelo B. Henderson Endowed Scholarship and Lecture Series Fund at UK was created by his wife, Felecia D. Henderson, in his honor.

"I am very excited about the second Angelo B. Henderson Lecture Series. The series is designed to give students and faculty an opportunity to learn from veteran journalists,” said Felecia D. Henderson, widow of Angelo B. Henderson and director of cultural competency at the Maynard Institute for Journalism Education. “What an honor to have Bruce Johnson, considered a living legend in the broadcast industry, share his knowledge and experience."

For 44 years Johnson was a news anchor with WUSA9-TV — the CBS affiliate in Washington, D.C. Upon his retirement, a mural of Johnson was painted outside of the city’s iconic Ben’s Chili Bowl restaurant, emblematic of his cultural and journalism legacy.

“The Diversity, Equity and Inclusion Committee is thrilled to help bring Kentucky native Bruce Johnson to the University of Kentucky,” said Kyra Hunting, Ph.D., and DEI Committee chair. “A distinguished journalist and author, Mr. Johnson’s accomplishments and health advocacy make him the perfect individual for the College’s Angelo Henderson Lecture Series which honors journalist Angelo B. Henderson for his accomplishments as a reporter and his community service. We hope individuals across our university community will be able to be inspired by Mr. Johnson’s visit and the impact he has made.”

Johnson’s self-description as a “survivor” transcends to personal health. He completed the Marine Corps Marathon after surviving a massive heart attack. In 2018 he revealed on-air his diagnosis of non-Hodgkin lymphoma. Johnson remains a national advocate for survivors of heart attacks and cancer, using his voice and experience to pull others out of deep waters.

Henderson — who passed away in 2014 at age 51 — was known for his community service, engaging personality and wide network of sources and ability to report about people in all walks of life. Similarly, Johnson counts his most prized awards his community service and civic awards, which number in the hundreds.

This event is free and open to the public and will be livestreamed here. For more information and accommodation requests please contact Kyra Hunting at kyra.hunting@uky.edu.