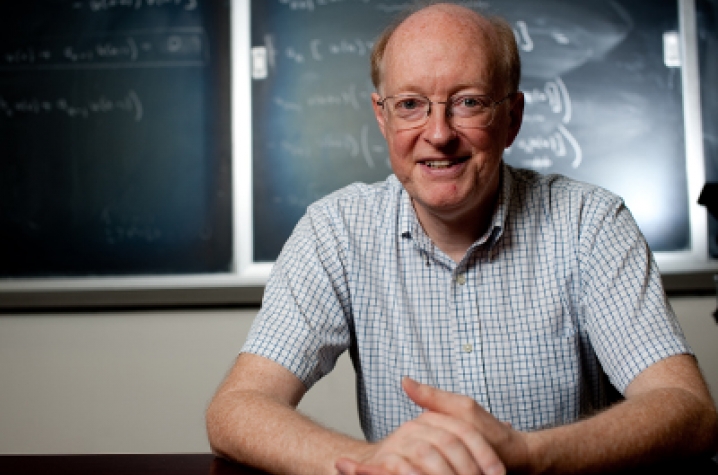 LEXINGTON, Ky. (April 25, 2011) — In 1834, Scottish naval engineer John Scott Russell observed a boat being pulled rapidly along a thin channel by a pair of horses. When the boat suddenly stopped, Russell noticed that the bow wave continued forward and moved down the channel "apparently without change of form or diminution of speed," according to his writings.

Mathematics professor Peter Perry will trace the trajectory of Russell's solitary wave through pure and applied mathematics from its discovery nearly two centuries ago to the recent work of Fields Medalist Terence Tao in his 2011 Distinguished Professor Lecture, titled "Making Waves with Mathematics" at 7:30 p.m. Thursday, April 28, in the W.T. Young Library Auditorium.

“The story of the soliton illustrates the power of mathematical thinking and its singular ability to uncover hidden connections between very different phenomena in nature,” Perry said. “Who would have guessed that a naval engineer’s observations from 1834 would lead to efficient means of transferring data at high speeds over the internet in 1994?  As I’ll explain in my lecture, the key step was the discovery that Russell’s wave was related, by a precise mathematical transformation, to the quantum mechanics of a particle in one dimension.”

Perry, who was awarded the prestigious College of Arts and Sciences Distinguished Professor Award for 2010-2011, enjoys encouraging students to work together in group settings.

“Contrary to stereotype, mathematics is a very social activity,” he said. “It’s a lot more fun and works a lot better when you have other people to work with, talk things over with, bounce ideas off of and understand things.”

As a full professor with significant research achievements, one might expect someone of Perry’s seniority to only be teaching upper level graduate courses in mathematics. Yet during the 2009-2010 school year, Perry taught only one graduate level seminar and eight sections of basic level calculus.

Perry’s professed love of mathematics was fostered as a child growing up in the 1960s enthralled by science and space exploration. Later, when studying theoretical physics in college, Perry found himself "…drawn more and more toward mathematics as the language of science, as something which intellectually seemed very beautiful to me — a way that you could see connections between seemingly unrelated areas.”

As a researcher, Perry specializes in inverse problems that at their core concern one of the most basic mathematical concepts: a function. Does every output correspond to the same input? Or can there be more than one input that gives the same output?

From teaching and mentoring students to research, Perry’s approach to the practice of mathematics is fundamentally community-oriented, infused with both discipline and enthusiasm.

The College of Arts and Sciences annually grants the Distinguished Professor Award to one of its faculty members on the basis of outstanding research, unusually effective teaching and distinguished professional service. Perry will receive one semester's research leave at full salary, and a $5,000 award, in addition to his formal public lecture.