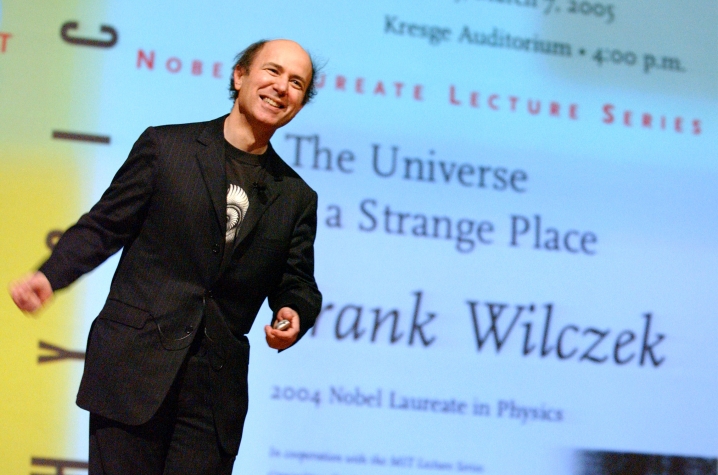 LEXINGTON, Ky. (April 26, 2016) — The University of Kentucky’s Department of Physics and Astronomy is proud to host Nobel Prize Winner Frank Wilczek this week as he delivers his lecture “Some Intersections of Art and Science.” The lecture will take place at 7:30 p.m. Thursday, April 28, at Memorial Hall.

Wilczek’s lecture will explore parallels and synergies between the physical sciences and the visual arts, with roots in human cognition and perception.

Frank Wilczek is one of the world's most eminent theoretical physicists. He is known for his theory of the strong nuclear force, the invention of axions and the discovery and exploitation of new forms of quantum statistics. As a 21-year-old graduate student at Princeton University, he and his advisor David Gross discovered and quantified many properties of the force that holds together atomic nuclei as well as the protons and neutrons that compose them. It is for this work that he and Gross received the 2004 Nobel Prize in Physics.

In addition to his work on the strong nuclear force, Wilczek has done groundbreaking work in all areas of theoretical physics. The profound influence of his work in these diverse areas is indicated by over 40,000 scientific citations to his more than 500 publications. He is still extremely active in his research, which continues to explore new areas of physics and related fields.

Wilczek is also a prolific author of nontechnical books and articles about physics, including his acclaimed 2015 bestseller “A Beautiful Question:  Finding Nature’s Deep Design”.  Themes from this book will be featured in Thursday night’s lecture, and copies will be available for signing by the author following the event.

Wilczek received his Bachelor of Science degree from the University of Chicago and his Ph.D. from Princeton University. He taught at Princeton from 1974 to 1981. From 1981 to 1988, he was the Huttenback Professor of Physics at the University of California at Santa Barbara (UCSB), and the first permanent member of UCSB's Institute for Theoretical Physics. In the fall of 2000, he moved from the Institute for Advanced Study, where he was the J.R. Oppenheimer Professor, to the Massachusetts Institute of Technology, where he is currently the Herman Feshbach Professor of Physics.

Wilczek's lecture at UK is made possible by generous donations from the Dr. J. C. Eaves Undergraduate Excellence Fund in Mathematics and Dr. Milton Huffaker, and by support from the Departments of Physics, Mathematics, Chemistry, Statistics, the College of Arts and Sciences, the College of Engineering and the Office of the Vice President for Research.