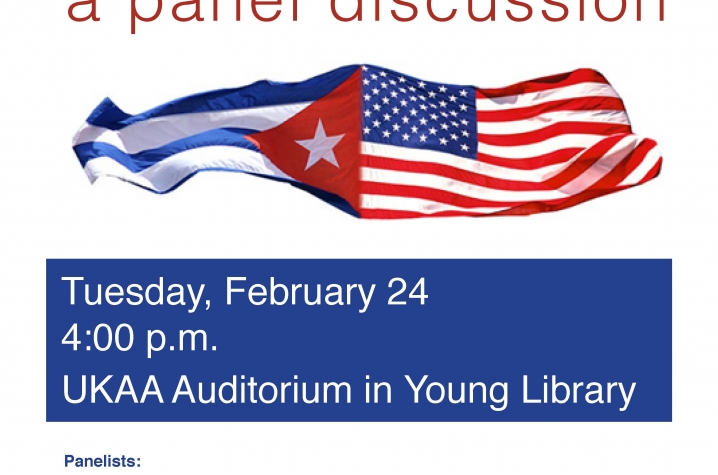 “We have such an incredible variety of perspectives and areas of expertise across the UK community, and the shift in US-Cuba relations is an ideal opportunity to let faculty, staff and students benefit from that expertise,” said Susan Carvalho, associate provost for internationalization, interim associate provost and dean of the graduate school and moderator of the panel discussion. “I know that the discussion will be enlightening for all of us, as we re-examine our own views, as well as broaden our understanding of alternative viewpoints.”

The panel discussion will focus on Cuba and U.S. relations and the U.S. Cuba embargo. Panelists include:

Enrico Mario Santí. Santí is the William T. Bryan professor of Hispanic studies at UK. Before coming to UK, Santí taught at Duke, Cornell and Georgetown. Santí has devoted books to Cuban figures, such as José Martí and Fernando Ortiz, and he has served on a number of editorial boards. In 1998, the Southern California Institute of Cuban-American Culture awarded him its highest award, the “Palma Espinada” Prize for his life and career achievement. Recently, Santí wrote a letter to the editor in response to an article about Cuba published by "The New York Times."

Peter Berres. Berres is the assistant dean for student affairs in the College of Health Sciences at UK and an instructor in UK’s Political Science department. Berres will lead an Education Abroad program in Cuba this summer that will help students develop a greater understanding of Cuban life, Cuba’s political and societal position in the Caribbean and Central America and Cuban- American relations.

Luciano Cruz. Cruz is an assistant professor of Spanish language at the University of Cincinnati, Clermont College. He was born in Cuba in 1969 and immigrated to Chile in 1990. In 2009 he earned his Ph.D. in Hispanic Studies at the University of Kentucky. He specializes in Latin American and Cuban literature as well as the relationship between literature and the construction of national identities. Cruz keeps strong ties to his native country not only in his line of research, but also by regular trips to Cuba, where he still has relatives and loved ones.

Kathleen Montgomery. Montgomery is an associate professor in the Patterson School of Diplomacy and International Commerce at UK. Before joining the Patterson School, Montgomery spent more than a decade leading USAID-funded trade projects as ‘Chief of Party’. These assignments include the East Africa Trade Hub in Nairobi, the Trade Facilitation Project in Ramallah, West Bank and the Southern Africa Trade Hub in Gabarone. Montgomery’s expertise with international trade, development and international economics will enrich the discussion.

The panel discussion is hosted by the UK International Center, which leads internationalization efforts at the University of Kentucky with the support of the International Advisory Council, a group of faculty and administrators representing each of the University’s 16 colleges plus other key academic units.