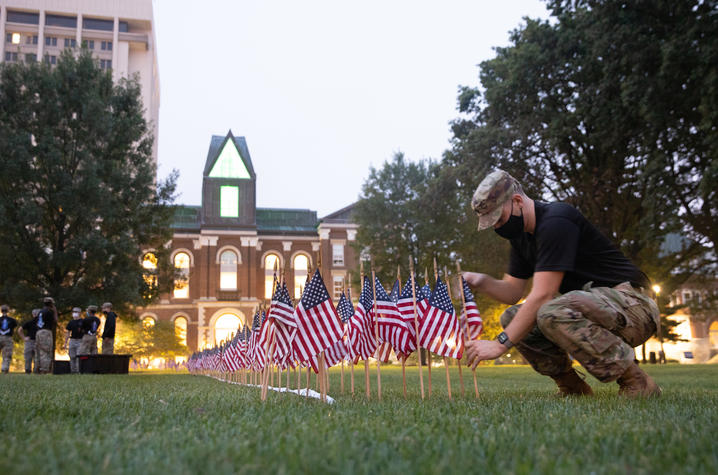 UK Army and Air Force ROTC will continue their annual tradition of dressing in uniform and placing small flags in memory of each of the nearly 3,000 victims of 9/11 on the front lawn of UK's Main Building. Mark Cornelison | UK Photo.

LEXINGTON, Ky.  (Sept. 10, 2021) — Tomorrow marks the 20th anniversary of 9/11, and the University of Kentucky Army ROTC and Air Force ROTC programs are remembering those who lost their lives in the deadliest terrorist attack in human history.

Zach St. Hilaire, company commander of UK’s Pershing Rifles chapter, says cadets will continue their annual tradition on Saturday, dressing in uniform and placing small flags in memory of each of the nearly 3,000 victims of 9/11 on the front lawn of UK's Main Building. From a podium, cadets will also read the name of each victim throughout the day. They will begin reading the names at 8:46 a.m., when the first attack occurred.

The Lexington Fire Department will be present during the opening of the ceremony.

A large memorial flag will also be erected, and a cadet will continually march in front of the flag carrying a replica rifle until all names have been read.

Students and community members are welcome to observe and take photos, organizers just ask they do not disturb the cadets reading the names or performing guard duty.