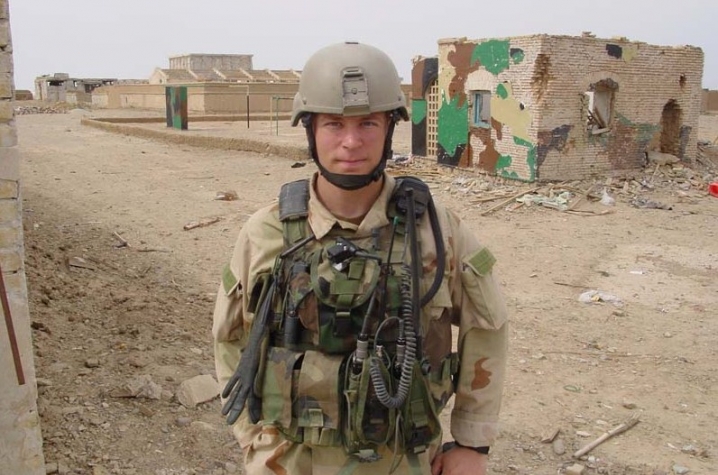 LEXINGTON, Ky. (April 22, 2010) - A University of Kentucky Arts and Sciences class will culminate its study of effective leadership next week with a talk from a war hero on the battlefield and back at home.

Former Army Ranger and Infantry Officer Nate Self will present "Leadership in Crisis" at 11 a.m. Tuesday, April 26, in the Student Center Small Ballroom.

As an Army ranger captain in 2002, Self led a group of courageous soldiers to the top of Takur Ghar Mountain to rescue a missing-in-action Navy SEAL, fighting the highest-altitude battle ever fought by U.S. troops. Seven of the first 10 men to die in the War on Terror fell in this battle.

The effort was dubbed “Rescue on Roberts Ridge,” and had it not been for Self’s quick-thinking and leadership, many more would have been killed. Upon returning home, Self was widely recognized as a national hero, awarded a Silver Star, Bronze Star and a Purple Heart.

But for him, the real battle was just beginning. Shortly after leaving the Army, Self began battling post-traumatic stress disorder. By employing the same resolve he demonstrated on the battlefield, he has now committed himself to helping a new generation of war vets by sharing his own story and by collecting theirs.

Combined with the release of his book, "Two Wars," Self is using his platform as one of the most decorated war heroes to come out of the Iraq/Afghanistan War to help fellow vets get the help they need and help train future Army leaders.

Self's talk marks the pinnacle of Lt. Col. Jason Cummins' "Principles of High Impact Leadership" class, with his discussion of leadership in a crisis.

"Captain Self's remarks will be focused on leading in a crisis, but we must remember the breadth of his initiatives and contributions to our force," said Cummins, a UK professor of Military Science. "This is an awesome opportunity for our students."

At Arts and Sciences Dean Mark Kornbluh's suggestion, Cummins developed a seminar-style leadership class for nonROTC students this semester, based on similar models of study at West Point and Duke University.

"The dean wanted to bring more of what we do in ROTC to other UK students," explained Cummins. "We have students from all over campus in this class."

The first half of "Principles of High Impact Leadership" focused on the self, while the second half of the course emphasized others. "We began with lots of reflection and introspection, developing a personal mission statement with our values and goals," Cummins said. "Once students become more self-aware, the second half of the course focuses on leading others with topics such as leader development, teams and cohesion, transformational leadership, and building a learning organization."

Students evaluated case studies and heard from a series of leaders in business, education, politics, religion and the military throughout the semester.

"We exposed students to different leaders in different industries, but they all held similar principles," said Cummins, who has received positive student responses.

"Principles of High Impact Leadership" is a pilot course, and students will be examining the curriculum and structure in the same style as a military after-action review.

"The class will be performing the same review as we do for a mission," said Cummins. "What did we set out to do, what actually happened and how do we get better?"

Anyone planning to attend Self's talk, should RSVP with Eva Hicks at eva.hicks@uky.edu.