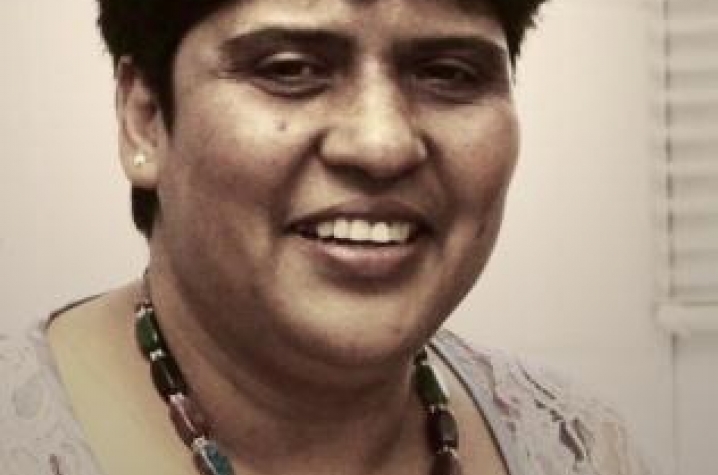 LEXINGTON, Ky. (April 27, 2011) —  As a current board member of a company she boycotted during apartheid, Zohra Ebrahim is a dynamic testament to the New South Africa.

Ebrahim draws on her past of political activism, as well as a wealth of experience on corporate boards, to assess the role of women in contemporary South Africa.

Women have gained a great deal in the new South Africa. It is the third most equitable government in the world. Forty-five percent of parliament ministers are women.

Unfortunately, women have not entered the ranks of business in the same way. There are only 12 women on corporate boards of listed companies and only one female CEO in the whole country. Violence against women and children occurs frequently as well, due in part to the legacy of families destroyed by apartheid policies.

"South Africa has come so far so fast," Ebrahim said, "But these changes bring new problems. Our young democracy has a long way to go. As I see it, the three major problems are education, health and housing."

Ebrahim will speak on "The Position of Women in Post-Apartheid South Africa: An Assessment of Gains and Losses" from 1-3 p.m. Friday, April 29, in Student Center 205.

South Africans had to traverse a huge span of inequality among race and gender after apartheid.

The government banned Africans from owning property in urban areas and discouraged study of subjects like math and science. In education, teachers taught vapid, empty lessons, refusing to prepare segregated students for anything other than menial positions and then gave difficult exams to prevent these same students from entering universities.

In spite of the improvements in equality following the overthrow of apartheid, the entrance of black men and women into society has not been without its problems.

There was an initial flurry of legislation, including a seven-part plan to increase black participation in the economy, including policies that might seem similar to the United States’ idea of affirmative action.

"The policies play out differently, though, because South Africa’s oppressors made up such a small percentage of the population," explained Program Director Lauren Kientz. "There are so many black men and women who were banned from economic participation who are now able to enter it.”

To rectify the continuing discrimination against blacks, women and people with disabilities, the South African government had to design broader social policies.

"It is not just about having a black face at the top," Kientz said. The policies encourage and reward working with black suppliers, developing skills among black employees and social responsibility."

Ebrahim continues as a business leader in South Africa, but she remains grounded with an understanding of the multiple perspectives of her countrymen and women.

Ebrahim's quiet confidence belies an exhaustive list of regional and international awards steeped in leadership and governance. During South Africa's anti-apartheid movement, Ebrahim organized civic associations, which she describes as community-based organizations formed in the absence of government.

"For example, we would organize for basic needs like electricity," she said. "If you looked at the way people lived in the 1980s and the early 1990s, we needed these types of groups."

Ebrahim rose to become the national civics coordinator of the United Democratic Front (UDF), which was the main internal body of the anti-apartheid movement.

Ebrahim coordinated across color lines, especially in townships and organized around issues, rather than race. She continues to work across boundaries, through projects like the Aspen Global Leadership Network, where she was selected as a fellow of the African Leadership Initiative in 2009.

Few women in South Africa could equal Ebrahim's profile in the community, business and political fields. The social housing company she chaired, SOHCO, was awarded the Govan Mbeki Award for excellence in both the provincial and national categories in 2008 and 2009, as well as the SA Housing Foundation award in 2010.

This led to her appointment by the Minister of Human Settlements, Tokyo Sexwale, as the as the inaugural chairperson of the Social Housing Regulatory Authority, a statutory body, in August 2010.

"South Africa's housing program is unique," she said. "We're one of the only countries where affordable housing amounts to giving individual subsidies to individuals who then get title to their properties. This leads to its own sets of problems."

Ebrahim also serves as a director, the deputy-chair and the Audit and Risk Committee chair of the Desmond Tutu HIV Foundation and the director of the Development Action Group.

Ebrahim's talk, sponsored by the College of Arts and Sciences Office of the Dean, the Department of Sociology and Gender and Women's Studies, is a part of UK's South Africa Initiative. With the theme of "South Africa & Kentucky: Different Lands, Common Ground,"