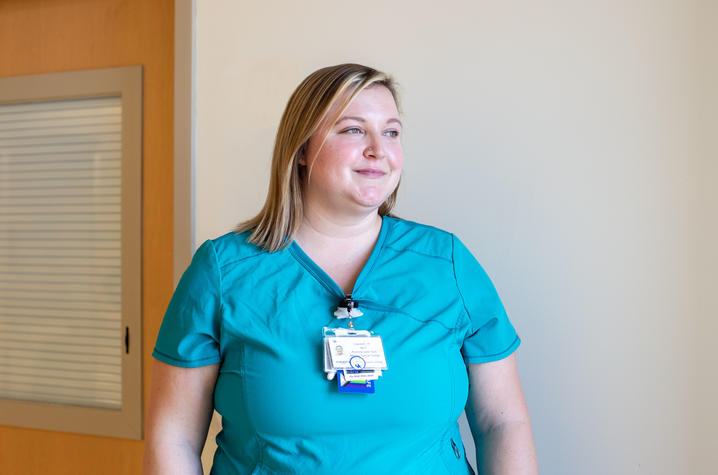 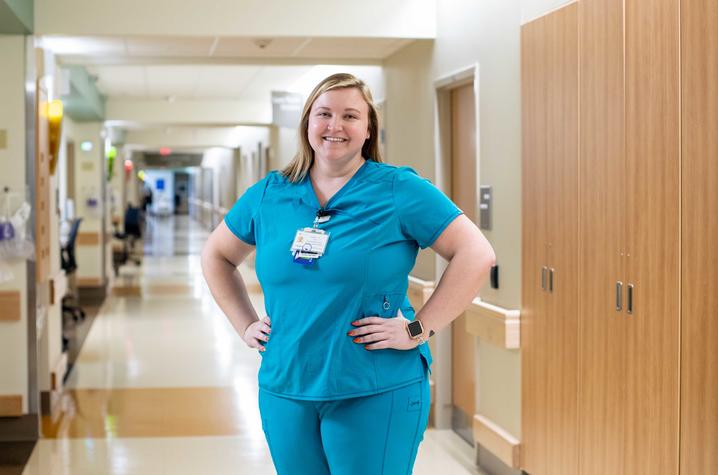 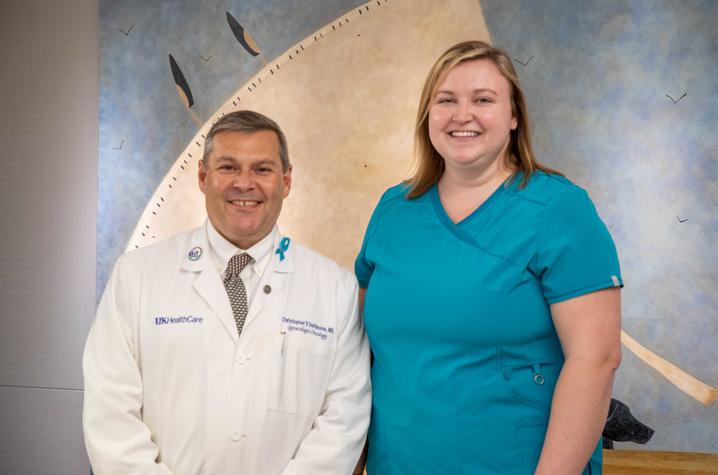 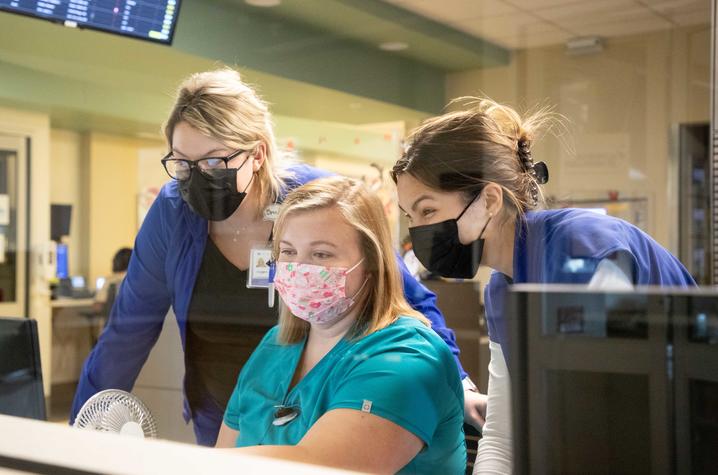 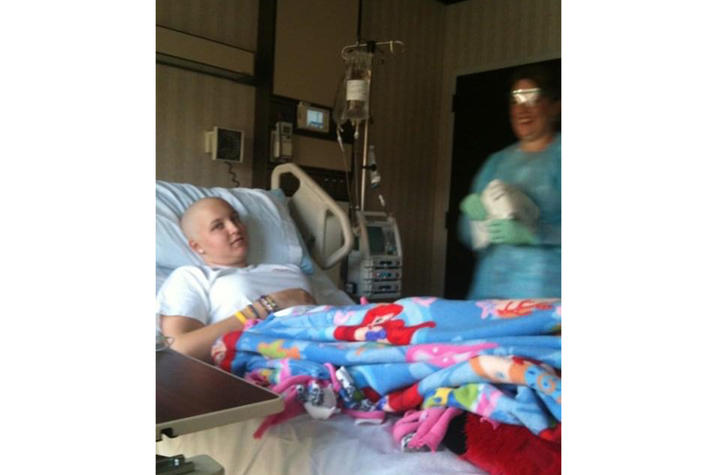 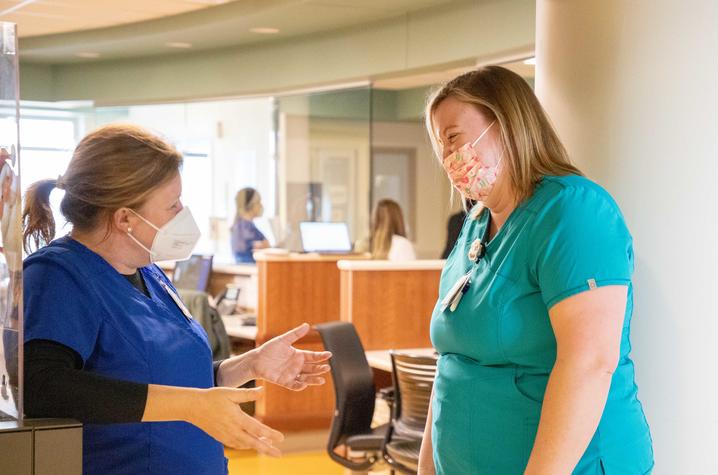 LEXINGTON, Ky. (Dec. 20, 2022) – There’s a special photo that 29-year-old Lauren Weyl has kept close to her heart for more than a decade – a reminder of everything she’s been through.

The photo is of Weyl with oncology nurse Sara Comley as she received her last round of chemotherapy at the University of Kentucky Markey Cancer Center. At 16 years old, Weyl was diagnosed with ovarian cancer – an extraordinarily rare diagnosis for someone her age.

As Weyl went through three months of chemotherapy, the nursing team at UK Markey Cancer Center’s inpatient unit cared for her during some of the most difficult times.

That wouldn’t be Weyl’s last time at Markey – today, she is 13 years cancer-free and is a nursing care technician alongside Comley and some of the same people who treated her in Markey’s inpatient unit. That nurse pictured at her bedside is now her colleague.

"After my cancer experience, growing up, I knew I wanted to pursue a career that involved taking care of people," Weyl said. "It just so happens that following my passion has taken me back to the same unit where I was a patient. I think it happened for a reason.”

Weyl works in the James and Gay Hardymon Patient Care Unit in the University of Kentucky Albert B. Chandler Hospital, which is dedicated to medical and surgical oncology patients that require inpatient care. Many of the patients are recovering from surgery or have cancers that require aggressive chemotherapy.

Richard Zerbee, a nurse in the unit, remembers Weyl well. In the years since she finished treatment, he’d thought about her frequently, occasionally mentioning her to his colleagues and wondering how she was doing.

“We were all aware of her situation because it was unusual to see ovarian cancer in someone so young and it was upsetting to see her deal with it at her age,” said Zerbee. “Over the years, I’d wondered whatever happened to her.”

One day, Zerbee mentioned her in the break room, wondering aloud about how she must be doing. Unbeknownst to him, Weyl had already begun working at Markey… and was in the room when he asked, exclaiming, “That’s me!”

Zerbee laughed. “I couldn’t believe it.”

In June 2009, Weyl, then a junior at Tates Creek High School, suddenly felt ill with abdominal pain during a volleyball practice. Hospital tests showed that something had ruptured in her left ovary. Doctors thought it was a cyst and pathology tests were negative for cancer.

Three months later, the feeling came back. The tumor had returned and had grown to the size of a football. Weyl had emergency surgery to remove the mass and her left ovary. Soon after, Lauren and her parents received the diagnosis: stage 2 ovarian cancer.

“I think it was much harder on my parents than it was for me,” Weyl said. “With me being a hard-headed stubborn teenager, my only thought was, ‘Can we just do what we have to do to get through this and get it over with so I can move on with my life?’”

“I remember she handled the diagnosis and treatment with a lot of maturity for her age,” DeSimone said. “Her parents were very much advocates for her care. Lauren was just as vocal. You could tell the apple didn’t fall far from the tree.”

“We usually see germ cell tumors in patients 8 to 20 years old, so Weyl was really the poster child for this type of cancer,” DeSimone said. “While her tumor was fast-growing, germ cell ovarian cancer is highly treatable if caught early enough.”

Weyl underwent three courses of chemotherapy over three months, spending several days in the inpatient unit. In December 2009, she was considered in remission and has been cancer-free ever since.

“Looking back now, I realize how lucky I was with the type of ovarian cancer I had and that it was caught early,” Weyl said. “I’m thankful for Dr. DeSimone, there could not have been a better care team to support and get me through those difficult months.”

Weyl is now part of the team helping care for patients who are going through cancer treatment, just like her. She’s been a nursing care technician with UK HealthCare for seven years and started working in the Markey medical and surgical oncology inpatient unit in 2021.

Weyl is currently taking classes to become a registered nurse, with the goal to work in pediatric oncology.

“When I was a patient here, I was still a child,” she said. “I want to take care of kids since I can relate to what they are experiencing and understand the parents' point of view,” Weyl said.

Weyl doesn’t bring up her cancer diagnosis with patients often, but draws on the experience to provide dedicated and compassionate care every day.

“I love my job regardless of the hard days, just because I know what patients are going through," she said. “Being able to help them even in the smallest way is so rewarding to me.”

Zerbee says Weyl’s presence is not just inspiring to patients, but the whole nursing team.

“In our unit, we treat patients during some of the lowest and most difficult parts of their cancer journey. We don’t get to see the lives they go on to live after they’re discharged,” Zerbee said. “Having Lauren on our team is a daily reminder of why we are here, to give people the opportunity to live life and pursue their passions.”