ATLANTA (April 24, 2019) – When Dr. Roger Humphries was among the first six people to complete an emergency medicine residency at UK HealthCare in 1996, seeing a patient who had overdosed on opioids was uncommon. Today, as the chair of the department, Humphries has implemented policies and programs to help address the needs of the 350 to 400 patients they see per day who are affected by complications related to opioid use disorder.

After completing his degree at the University of Kentucky College of Medicine, and a one-year surgical residency, he entered the United States Air Force in order to pay back the financial support that had been provided to him during medical school. While in the military, he completed four years of training in family and community medicine. He then returned to UK HealthCare and completed a three-year residency in emergency medicine.

Humphries has developed several programs during his time as the leader of the emergency department including the development of the pediatric emergency room, toxicology and ultrasound programs. Currently in the works are plans for a geriatric emergency room and substance use disorder programs.

Treatment for chronic diseases isn’t often done in the emergency department. As the opioid crisis continues to ravage the nation and state, a new approach – no longer defined by treat and release – has been adopted.

““If you’re going to find a way to deal with this epidemic, you have to think about it practically. What we’re doing is not working,” he said. During his two decades working as an emergency physician, Humphries’s views on addiction have developed and shifted.

“I used to think responsibility was fully on patients,” Humphries said, “but now I know this is a brain disorder – one of my kids could fall into a problem like this.” That understanding, that addiction is a disease, which can affect anyone regardless of their age, race, neighborhood or willpower, has inspired Humphries to make changes in his practice of medicine and in the department he leads.

The paradigm shift that has taken place in the UK HealthCare emergency rooms is to treat the underlying cause of the complications that often bring patients to the emergency room (ER) and reducing the cost of treating patients long term. Patients typically come to the ER having overdosed on opioids, for treatment of symptoms related to withdrawal or for infections caused by injection drug use.

An overdose is treated with Narcan, the overdose reversal drug which the U.S. Surgeon General recommends all Americans have in their possession. Treatment with Narcan restores a patient’s breathing.

A patient revived with Narcan immediately enters withdrawal. Withdrawal has been described by many as the worst flu you’ve ever had times 10. Symptoms of withdrawal include vomiting, diarrhea, stomach cramps, insomnia, muscle pain, excessive sweating among other symptoms. That is why five physicians in the emergency department completed the necessary training to prescribe buprenorphine, the medicine used to treat opioid use disorder, which halts the symptoms of opioid withdrawal within minutes of taking it.

However, a partnership between the UK Department of Emergency Medicine and UK Center on Drug and Alcohol Research is helping reduce barriers to treatment. The First Bridge Clinic, established in 2017, is a clinical setting where providers in the emergency department can refer patients to receive transitional care for substance use disorders. In creating this new multidisciplinary service, the UK team is hoping to positively impact the opioid epidemic by expanding and improving access to recovery services for patients.

The new clinic will be one of the topics presented at the 2019 Rx Drug Abuse and Heroin Summit in Atlanta. The annual summit is the largest national collaboration of professionals from local, state, and federal agencies, business, academia, treatment providers, and allied communities impacted by prescription drug abuse and heroin use. It was introduced in 2012 under the leadership of Operation UNITE and U.S. Rep. Harold “Hal” Rogers (KY-5th).

This is the first year Humphries will be attending the summit and he looks forward to learning from other experts in his field and other specialties about the best way to help patients and families impacted by addiction. 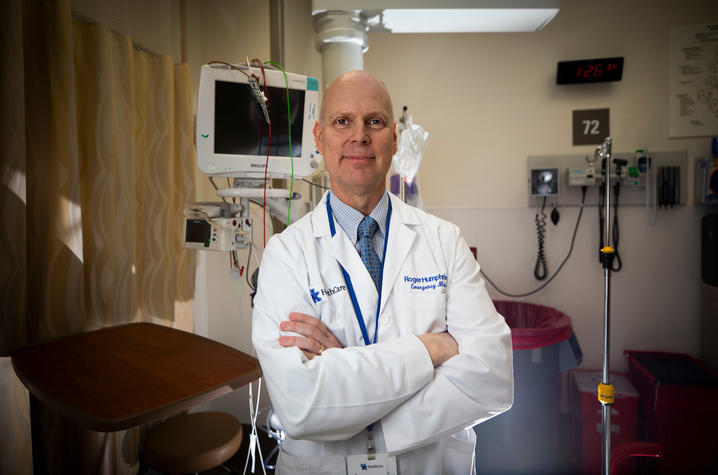 Dr. Roger Humphries is the chair of the Department of Emergency Medicine at UK HealthCare.