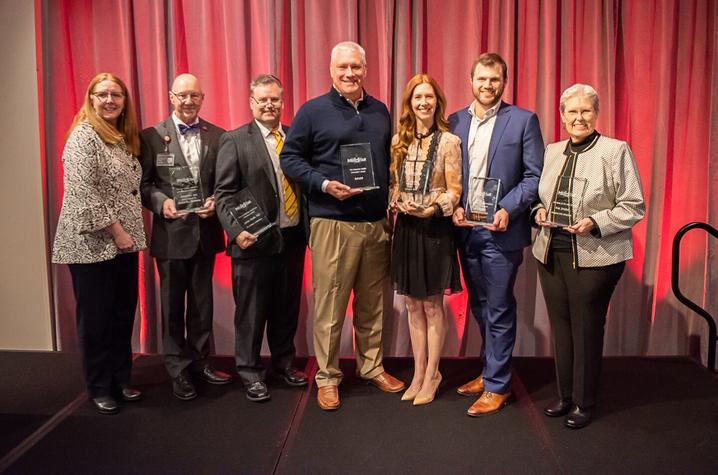 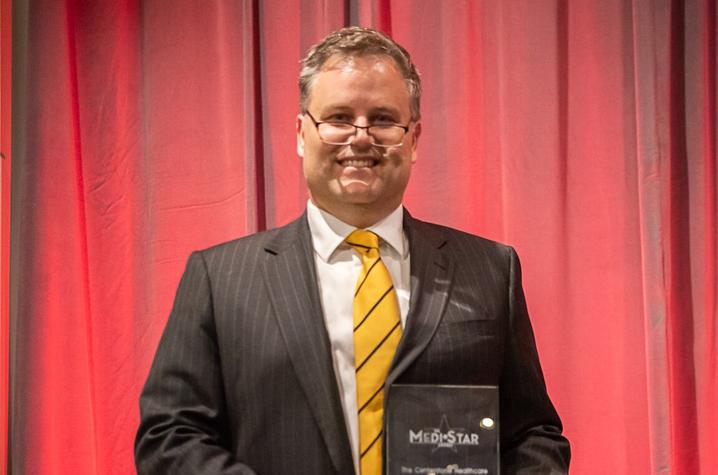 LEXINGTON, Ky. (Nov. 1, 2019) —  The 2019 MediStar Awards honored University of Kentucky College of Medicine Dean Robert S. DiPaola and Jamie L. Studts, Ph.D., professor in the UK College of Medicine Department of Behavioral Science. Since 2007, IGE Media, publisher of Medical News, has recognized excellence in the business of healthcare at the exclusive MediStar Awards, which honors healthcare professionals for their achievements in advocacy, innovation, education, leadership and aging care.

This year, more than 45 individuals and organizations across Kentucky and southern Indiana were represented as MediStar Award nominees.  Winners were announced at the MediStar Awards on Tuesday, Oct. 29 at the Muhammad Ali Center.​

DiPaola has been selected as the Dean Dorton Physician of the Year, and Studts received the Centerstone Healthcare Advocacy Award.

The Dean Dorton Physician of the Year award presented to DiPaola recognizes a physician who has shown outstanding leadership and vision. “I’m incredibly humbled to accept an award of such prestige,” DiPaola said. “At the same time, this award motivates me even more to promote the overall mission of the College of Medicine and work on advancing health care within the state.”

Since taking leadership of the College of Medicine in 2016, DiPaola has utilized his expansive medical background to address the Commonwealth’s physician shortage by growing the college’s in-state presence, an initiative working to educate more physicians capable of treating Kentucky’s sickest patients. He has overseen the creation of regional campuses in Bowling Green (2018) and Northern Kentucky (2019), already bringing nearly 100 more future physicians and researchers into the state for their medical education. To make this possible, he built partnerships with well-respected regional colleges such as Western Kentucky University and Northern Kentucky University, as well as health care providers Med Center Health and St. Elizabeth Healthcare.

Along with medical advancements within the college, DiPaola launched a transdisciplinary strategy to strengthen the College of Medicine’s educational programming, advance transformative research and clinical care, promote diversity, and engage communities. He also has led the college to double its National Institutes of Health research funding since fiscal year 2017, which has allowed for more groundbreaking studies focused on improving the health and wellness of Kentuckians and beyond.

The Centerstone Healthcare Advocacy Award honored Studts for his exemplary work to raise awareness of health challenges in the region and to affect change. Studts, a licensed clinical health psychologist and professor in the College of Medicine, serves as director of the behavioral and community-based research shared resource facility and assistant director for the cancer prevention and control program within the Markey Cancer Center.

Kentucky suffers the highest rate of lung cancer incidence and mortality in the United States. Studts’s research focuses on behavioral and psychosocial factors associated with cancer prevention and control of tobacco-related malignancy. His team develops and tests community-engaged interventions to promote informed, shared decision-making and behavior change among patients and clinicians regarding prevention, screening, and survivorship of lung and head/neck cancer.

His work has included leading a comprehensive, multilevel effort to raise awareness of lung cancer screenings, educate clinicians on screening referrals, and facilitate implementation of high-quality screenings. Following this campaign, recent data from the American College of Radiology Lung Cancer Screening Registry show that Kentucky has achieved the highest per capita rate of lung cancer screening in the nation.

“Historically, there have not been many uplifting moments in lung cancer prevention, control, and care, but the field is experiencing several rays of hope that have the potential to transform the burden of lung cancer in Kentucky,” Studts said. “This recognition of our team’s work to help Kentuckians access high-quality lung cancer prevention, early detection, treatment, and survivorship validates these efforts and provides another dose of hope to end the stigma and burden of lung cancer in the Commonwealth.”