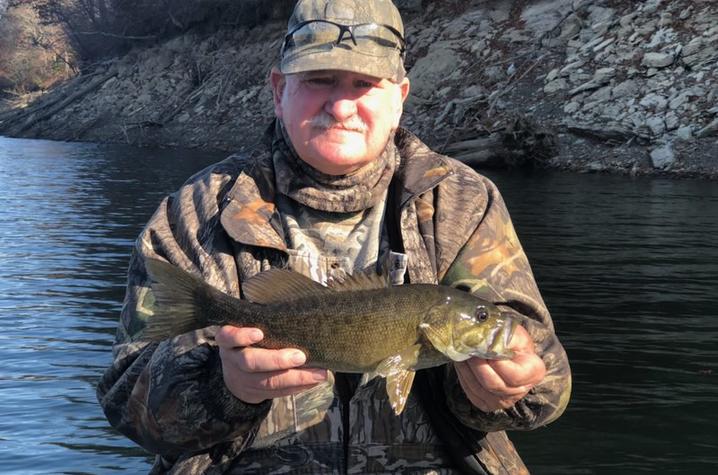 Michael Stalker loves to fish, hunt and care for his beehives. With his life-changing elbow replacement, he can now engage in activities pain-free, and with full motion of his dominant arm. Photo provided by Michael Stalker.

LEXINGTON, Ky. (Oct. 4, 2022) — Michael Stalker comes from generations of Eastern Kentuckians — living and growing up in the small town of Mouthcard, Kentucky. As a lover of the outdoors, Stalker was always on-the-go working blue-collar jobs and engaging in some of his favorite activities: hunting, fishing and especially tending to his 50 beehives — a labor loved by generations of his family.

But an active lifestyle, like Stalker’s, comes with its risks.

In 1997, when he was 42 years old, Stalker was installing a roof on someone’s home for work. The next thing he knew, he slipped, fell many feet to the ground, and endured injuries that changed his life forever.

Stalker had broken many parts of his body, requiring several surgeries. Surgeons at a local hospital soon operated on his ankles, wrist and hip — but his worst injury was in his right elbow.

“The elbow was bad,” Stalker said. “They operated about nine times trying to fix it for me.”

As his elbow deteriorated over the next 24 years, Stalker eventually had to live his everyday life with a painful elbow that could hardly move.

“I couldn’t straighten it out, I couldn’t fold it up,” Stalker said. “I really couldn’t even get it to my mouth to scratch my head, or even feed myself — I was right-handed, so I had to really adjust to this new life. I had to completely teach myself how to be left-handed.”

Stalker was forced to retire early because of his injuries — but he was resilient. He learned to adapt so he could continue doing the things he loves. Keeping beehives was a generational activity in his family — when Stalker was young, his grandfather kept bees and taught him everything he needed to know in order to have his own.

“My grandpa kept bees, and my dad kept bees,” Stalker said. “I was raised with this, grandpa showed me how to do everything. As a kid, we’d go into the hills to get them, and I’ve just had them for as long as I can remember. I couldn’t tell you how long.”

In June 2021, Stalker was doing just that — taking care of his beehives, and he had another accident. Stalker tripped and fell over all his hives, landing directly on his previously injured elbow.

“It swelled up on me really bad, so I went to a doctor here first,” Stalker said. “At first, I didn’t even realize it was broken yet. The doctor saw my elbow, and said it was so far gone that they couldn’t do anything with it anymore, so they sent me to a specialist at UK.”

“When I got an appointment with him, he told me how bad it really was,” Stalker said. “He told me that I needed a complete elbow replacement. But he was confident and explained all he could do for me.”

Kamineni said that Stalker’s injury was so bad, he hardly knew how he was able to cope with it for even the amount of time it took him to be referred to UK.

“It was seriously grinding, bone on bone,” Kamineni said. “There was no cartilage left. And it was very deformed and unstable especially after the second accident. He was coping with this for so long, and our next step was to take a look into Michael’s life and set some expectations for what we could do.”

Kamineni investigated Stalker’s lifestyle and discovered his wants and needs to get him back to his usual activities.

Then, he went over the options with Stalker. He could either reconstruct his elbow with an allograft using cadaver tissue and bone, have his joint fused together resulting in zero movement at the elbow, or he could have a total elbow replacement. There are pros and cons to each choice, but Stalker ultimately told Kamineni that it was important for him to use the elbow as normally as he could, to be able to continue hunting and tending for his bees.

Together, Kamineni and Stalker decided on a complete elbow replacement. This would provide Stalker’s joint with stability and movement and would relieve the horrible pain that he was experiencing.

“With an elbow replacement, Stalker is permanently restricted on how much he can carry with that arm,” Kamineni said. “But, when we talked about that, and set that expectation, Stalker was excited to just be able to have full motion again. To feed himself, move by himself and do things he couldn’t do before.”

“With a procedure like this, some patients struggle with following the very careful instructions we give them for at-home care of their new joint,” Kamineni said. “But not Michael. He was very diligent, very genuine and was so committed to living a full life again — which showed in his eager compliance with taking care of his joint as instructed. Ultimately, I wanted to ensure that Michael wouldn’t require any additional surgeries on this joint for, essentially, the rest of his life.”

“Now I don’t have any issues with it,” Stalker said. “It doesn’t hurt, I have good full movement of it. I can straighten it almost all the way out, eat by myself, scratch my head and all of that, which I couldn’t do at all before.”

Stalker will continue to be limited in the amount of weight he can carry with his right arm, but he described that gaining back the motion in itself has been huge.

“This elbow replacement changed my life,” Stalker said. “It gave me more use of my arm than I have had in forever. I am so happy with what they have done, and Kamineni has just been real good, and real nice to me.”

Once Stalker was recovered, he was back to his normal life. After his first trip back to hunting, he sent Kamineni a photo of the first deer he was able to shoot, fish that he had caught and videos of his thriving beehives.

“Patients like Michael Stalker are the joy of my job,” Kamineni said. “They’re the reason for being in health care. He is a genuine, honest chap and has had such an interesting life, and I am privileged to be able to help such patients. So, receiving photos and videos of him safely engaging in his favorite activities again, that’s pure gold.”

And Kamineni, of course, recognized that a success story like this is a team effort.

“It is not an individual endeavor in any way,” Kamineni said. “We wouldn’t be able to achieve successes, like Michael, if it weren’t for the entire care team, of which I am a part. And, in fact, Michael is probably the most important person on this team, otherwise fondly known in Great Britain as a ‘Diamond Geezer.’”