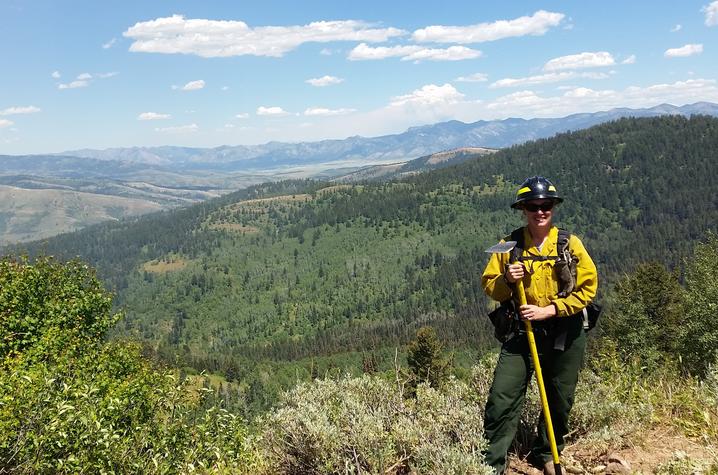 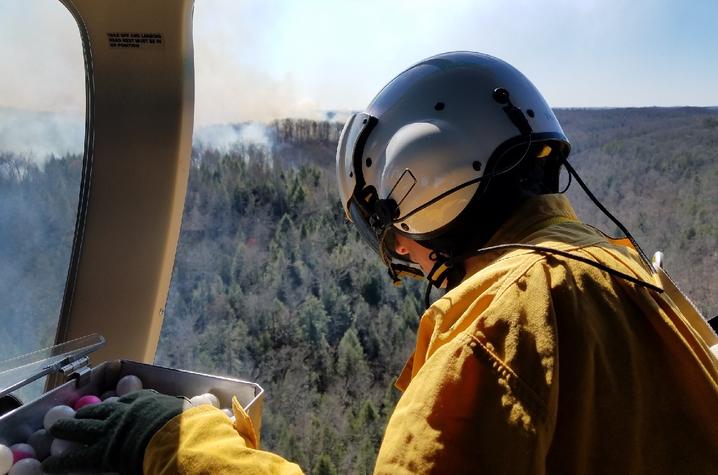 In the almost 10 years since she began full time work as a firefighter with the U.S. Forest Service, she's been on the fire lines in 11 states, including her beloved Kentucky where she was born. She's wielded chainsaws and performed aerial ignition operations – starting controlled fires from helicopters to thin out forests at high risk of wildfires.

But the scariest time in her life had nothing to do with fires.

Becky and her husband were ready to welcome their first child.  Becky had sailed through her pregnancy, and labor and delivery were textbook.

"The day before I went into labor, I was shoveling mulch," she said.

As they sat in a Bringing Home Baby class, Becky suddenly got the worst headache she'd ever experienced. Her doctor was confident that it was an epidural headache -- a typical side effect of this form of anesthesia -- but ordered a CAT scan just in case.

He was waiting for Becky when she was wheeled back into her room.

"You have a subdural hematoma," he said, "and I've called the helicopter. You're going to UK."

Becky says the Forest Service does an excellent job training people to be both mentally and physically prepared for almost any situation, and as a result she's never been scared on the fire lines. But this helicopter ride was way scarier than any she'd been on.

"I thought I was going to die," she said.

Neurosurgeons at UK HealthCare worked to resolve the headaches and vision changes caused by bleeding on the brain, ultimately resorting to a craniotomy to relieve the mounting pressure within her skull. When she returned to the hospital three weeks later complaining of feeling weird ("I thought it was the Tylenol 3 they'd given me for pain; I made my husband flush them down the toilet"), an EEG revealed that the scarring from the brain bleed was causing seizures.

The Kentucky Neuroscience Institute's (KNI) Dr. Amy Hessler put Becky on anti-seizure medication, and Becky has been seizure-free since the birth of her son – a critically important outcome as Becky intended to continue fighting fires.

Hessler, who directs UK HealthCare's Women's Neurology program, asked Becky at every follow-up appointment whether another baby was in the cards.

"And every time without fail, Becky's answer was an emphatic 'No,'" Hessler said. "She said, 'Why push our luck? We have a beautiful son and we love our lives.'"

Over time, however, Becky began to feel a tug on her heart.  The thought of her son being an only child bothered her, but she worried about the perils of another pregnancy, both for her and for the new baby she was yearning for.

Anti-seizure medications increase the risk of birth defects, says Hessler, but you can't just stop treatment, which puts the mother at risk of seizures which can endanger both mother and baby.

"This was particularly true for Becky, whose career was more dangerous than many women's," she said.

So Hessler sat down with Becky and her husband and explained all the options on the table and their associated risks.

"She gave us the knowledge to make our decision with confidence," Becky said. "When we came back and said we wanted to have another baby, Dr. Hessler said 'Let's do this!' She was all in."

Hessler says that as recently as the 1980's, women with neurological problems were told to forget about having children. "It was considered too dangerous for both mother and child," she said. The loss of a most cherished rite of passage, coupled with the burden of illness, was demoralizing for many women. "I feel it’s my calling to help these women have successful, healthy pregnancies."

While it didn't inform her decision to pursue a career in women's neurology, Hessler can certainly relate to how they feel: an arterial venous malformation in her brain caused two strokes – one at age 12, and the other at age 29. As her career progressed, Hessler has risen through the ranks, serving as the Section Chair for Women's Issues at the American Academy of Neurology from 2014 to 2016 and starting the Obstetric Neurology practice at UK HealthCare – just the fifth such program in the U.S.

Hessler worked with Becky for more than a year before giving her the go-ahead to try to get pregnant, recalibrating her medicines to get her on the lowest effective dose possible. Once Becky conceived, Hessler followed her throughout her pregnancy to make sure her medications were in sync with the physical and hormonal changes she was experiencing. She also collaborated with UK HealthCare's High-Risk Obstetrics  service to develop a pregnancy and delivery plan that minimized risk to both mother and baby.

"She was absolutely perfect," Becky said.

Today, Madelyn is the epitome of girliness, with bows and glitter and flowery outfits – but none of that stops her from playing in the mud or catching bullfrogs.

"Our family likes to be outside 24/7, and Madelyn is all in on that – just with a slightly different sense of style," Becky said.

Becky has learned a lot from her time as a Wildland fighter with the U.S. Forest Service.

"Your crew members out on the fire line come from different backgrounds, each with something different to offer the crew," she said.  "You definitely trust them with your life. They become your family."

Then Becky talks about Hessler, and a little smile curls at her lips.

"My experience with Dr. Hessler feels a lot like that," she said. "She was so determined to make this a success for us, and actually came to my hospital room to meet Madelyn. I really feel she was invested in our success in the same way my team is when we're on the fire line."

She is also a self-proclaimed UK fan for life.  In addition to her relationships with UK HealthCare's's KNI and Maternal-Fetal Medicine, she recently received an ACL repair from Dr. Mary Lloyd Ireland in UK HealthCare Orthopedic Surgery and Sports Medicine.

Hessler uses Becky's story as a model for all women with neurological issues who want to become mothers.

"Planning is essential to success, whether the neurological issue is epilepsy, stroke, multiple sclerosis, or something else," she said.  "I help these women and their obstetricians prepare for an outcome that looks a lot like Becky's."