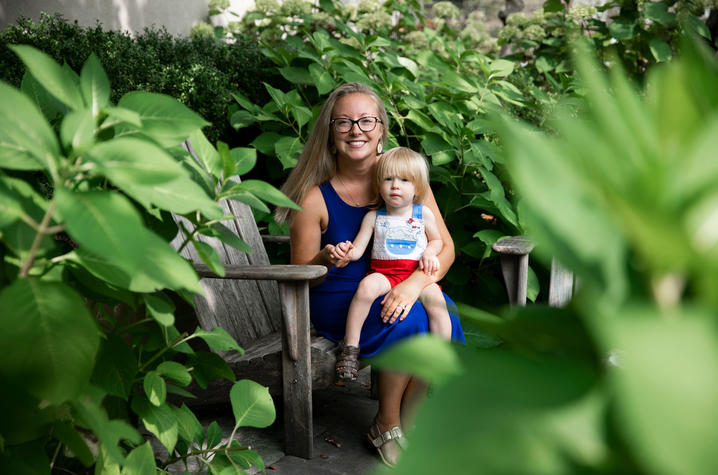 After seeing how the staff at KCH cared for Jeremiah, UK nurse Jennifer switched career paths so she could work with the staff that saved her son's life. Photo by Pete Comparoni | UK Photo (photo taken in accordance with social distancing guidelines)

LEXINGTON, Ky. (Oct. 1, 2020) ­— When your child is in the hospital, it can be a harrowing, life-changing experience. You learn not to take the days for granted and your child’s care team becomes family. For Jennifer Brinegar, the doctors, nurses and staff at Kentucky Children’s Hospital had such an impact on her that she changed career paths and now works with them to care for other people’s children as the staff cared for hers.

When Jennifer was 21 weeks pregnant, her son, who was to be named Jeremiah, was diagnosed in utero with a rare but serious heart defect called transposition of the great arteries (TGA). In a healthy heart, the pulmonary artery carries blood from the heart to the lungs where the blood is oxygenated. The other major blood vessel, the aorta, carries the oxygenated blood back out to the body. In TGA, the two main blood vessels are switched, causing unoxygenated blood to circulate to the body, and oxygenated blood to return back to the lungs. Without surgical correction, babies with TGA rarely survive.

Within a few hours of Jeremiah’s birth, he required a heart procedure called balloon atrial septostomy that created a bigger hole between the chambers in his heart to allow more oxygenated blood to go to his body. He also had an arrhythmia called supraventricular tachycardia (SVT) as well as pulmonary hypertension, which complicated his condition.

At 11 days old, he underwent a procedure called an arterial switch operation in which the aorta and the pulmonary artery were surgically transposed to their correct locations. Six days after his surgery, he went home after spending the first two weeks of his life in the cardiac intensive care unit (CICU) at KCH. Jennifer recalls the support she and her family received while Jeremiah was in the hospital and the profound impact it had on her.

“While we were in-patient, I witnessed the support and collaboration between all team members caring for Jeremiah and loved how decisions were made together, including me,” said Jennifer. “After our experience at UK, I thought, ‘what better way to be involved than to directly provide care for these patients?’ I wanted to provide the same support and care that we received, and I felt like I could bring a different perspective and be able to relate to these patients and their families.”

Jennifer decided to transition from her nursing job in adult care where she worked in a telemetry unit at UK’s Good Samaritan Hospital to be a nurse in the CICU and be a part of the supportive team that cared for her son. After a five-month orientation, during which she completed in-person and online critical care class training to become certified for different pediatric emergencies, Jennifer continues her education with a cardiac core curriculum class.

“I have learned with this population that every patient is different, even if they have the same exact defect, so every day I am learning something new,” said Jennifer. “Last year I completed my bachelor’s degree in nursing and at some point, I would like to return to school to further my education.”

Now a year into her new role in the CICU, she is working alongside the same people who saved her son’s life including the surgical teams, cardiology teams including Dr. Preeti Ramachandran who first diagnosed Jeremiah at 21 weeks and who continues to see him for follow up care, and the physicians, nurses, social workers, respiratory therapists and support staff who supported her family throughout his hospital stay.

Now 21 months old, Jeremiah is a healthy, inquisitive toddler. He’ll require follow-up care for the rest of his life, but for now, he happily runs around with big brother Bennett. Jennifer and her family are grateful to the innumerable people involved in Jeremiah’s care.

“I am thankful for the pediatric joint heart program at UK that allowed us to receive the same level of care locally without having to travel out of state,” said Jennifer. “I was able to spend Christmas morning with my four-year-old at home and return to the hospital that same day. I am grateful for the opportunity of getting to directly work with the same people who cared for Jeremiah during the hardest days of our lives.”