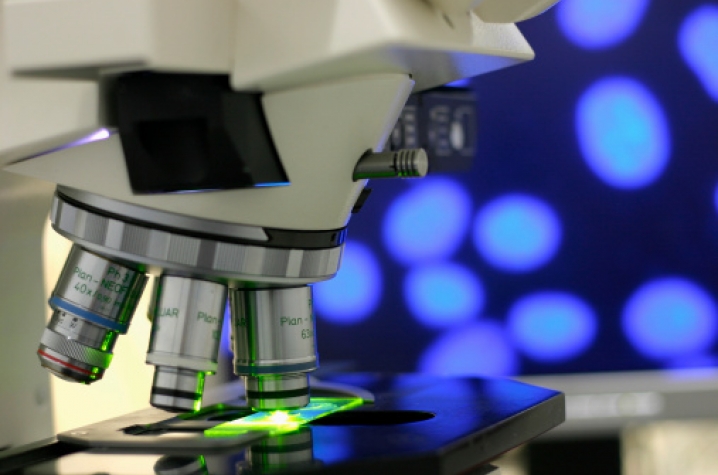 LEXINGTON, Ky. (Sept. 2, 2013) -- The University of Kentucky Markey Cancer Center announces the addition of four new faculty members who study the role that metabolism plays in cancer. Teresa Fan, Andrew Lane, Richard Higashi and Hunter Moseley will bring more than $17 million over five years in current federal funding and will develop a research center at UK.

The researchers will establish a UK Center for Regulatory and Environmental Analytical Metabolomics (UK-CREAM), in partnership with Markey over the next few months with their laboratories being located on the fifth floor of UK's BioPharm Complex, which is already home to other innovative cancer researchers.

Fan, Lane, Higashi, and Moseley utilize state-of-the-art instrumentation to understand – by tracking atoms – how various conditions or environmental exposures disrupt normal metabolism and how abnormal metabolism contributes to the development and/or spread of cancer.

"The addition of this team of highly accomplished researchers is a major catalyst in the efforts of the Markey Cancer Center to both grow its cancer-related research funding and enhance its ability to submit a competitive renewal application of its National Cancer Institute (NCI) Cancer Center Support Grant in the next cycle,” said Dr. Mark Evers, director of the UK Markey Cancer Center.

Teresa Fan serves as director of UK-CREAM, currently located at the University of Louisville. She has been continuously funded in federal grants since 1996. She was trained as a plant biochemist at the University of California, Davis, followed by postdoctoral training on in vivo nuclear magnetic resonance (NMR) and metabolite profiling applications to stress metabolism at Stanford University. Together with Lane and Higashi, she pioneered the combined use of NMR and mass spectrometry (MS) for investigating environmental stress-induced metabolic changes in a variety of indigenous and model organisms. She has published 100 peer-reviewed papers and holds two patents. She has trained 11 postdoctoral scholars, one surgical resident, six medical students, and 8 graduate students.

Andrew Lane is associate director of NMR Development at UK-CREAM. He was trained in biochemistry and enzymology at University College London and then received further training in biophysics (Biozentrum, Basel) and NMR (Stanford University) before becoming a tenured staff scientist at the National Institute for Medical Research in London. In his most recent post, he was the program leader in structural biology and director of the NMR facility. Lane has published 189 articles, 160 abstracts and presentations, holds two patents and has been awarded 25 grants as PI or co-I from both federal and nonfederal sources.

Richard Higashi is UK-CREAM associate director of mass spectrometry development. He is a bioanalytical chemist with a highly diverse background spanning three decades, ranging from pesticide chemistry, aquatic toxicology, plant biochemistry, bioremediation, air pollution, to biochemical imaging, and most recently cancer metabolism. He has served in co-directorship of various research centers across all of these fields for more than 15 years. Higashi has more than 84 peer-reviewed publications and currently is involved in more than $9 million in extramural funding, mostly from NIH but also from entities such as the Bill and Melinda Gates Foundation. He was one of the founding members of the International Metabolomics Society.

Hunter Moseley is UK-CREAM associate director of informatics. He has degrees spanning computer science, mathematics, chemistry, and biochemistry and more than 20 years of experience in bioinformatics research, particularly in the development of automated analyses of NMR and mass spectrometry data. He holds a patent in computational methods for NMR data analysis and has published 27 peer- reviewed papers. He recently received the Kentuckiana Metroversity Award for Instructional Development, the Kentucky Academy of Science Outstanding Early Career Award, and an NSF Career Award.