Markey's SHE in Oncology program aims to encourage young women of diverse backgrounds to pursue science and medical careers.

LEXINGTON, Ky. (Dec. 6, 2021) — Hillary Thompson’s interest in science comes from a personal place — the desire to help others.

“From a young age, I’ve always been interested in science — I like digging into how the body works,” said Thompson, a junior at Frederick Douglass High School in Lexington. “I think what sparked my interest is really trying to help people — helping them get over their sickness.”

When her mother came across information online about the University of Kentucky Markey Cancer Center’s Summer HealthCare Experience (SHE) in Oncology program, Thompson was immediately interested in learning more specifics about the mechanisms of cancer.

“My grandmother and some of my other relatives have had cancer,” she said. “So I wanted to learn more about (it).”

Launched in the summer of 2021 with funding from the American Cancer Society, SHE in Oncology empowers Kentucky high school students who identify as female with experiences that give them insight about career interests and leadership opportunities in the field of oncology. Additionally, SHE targets those who are underrepresented in the science fields, including young women who are a racial or ethnic minority, low income, first-generation college-bound, and/or living with a disability.

The overarching goal of the program is to encourage more women of diverse backgrounds to go into science and medical fields. These career fields are largely dominated by men, says Nathan Vanderford, Ph.D., associate professor in the UK College of Medicine and director of the SHE in Oncology Program.

“There’s much fewer women in medicine and research positions than there are men,” Vanderford said. “That’s a disparity that needs corrected for many reasons, but it’s also important because cancer is a huge public health crisis, and we need many more cancer researchers and clinicians.”

During the two-week summer experience, participants took part in virtual programming that featured lectures from a number of cancer experts from UK and other major universities across the country who have their own SHE in Oncology programs, including the University of Texas at Austin, University of Chicago, University of Michigan, and University of Pennsylvania.

The young women also got some real life lab experience — the SHE in Oncology program partnered with eCLOSE (to Empower the Citizen Lens On Science through Education), a nonprofit group that provides hands-on cancer genetics experiments using fruit flies. Each student received a Lab-in-a-Box via mail, and eCLOSE scientists and teachers provided online instruction for the kits, which let participants test the effects of tobacco use on fruit flies.

Working with the lab kit was especially appealing for Lexingtonian Avanti Sawardekar, who says she has a specific interest in the field of cancer research and seeks out any opportunity to gain experience with lab work.

“In my senior year of high school, I talked with a professor and he helped me get more used to working in the lab, and I got a lot of connections from it,” Sawardekar said. “The (SHE in Oncology) program will help me achieve my goals because it allowed me the opportunity to listen to a lot of speakers talk about their research and lab protocols, and having the lab kit at home allowed me to get used to working with different materials.”

Additionally, the program has also given participants the opportunity to meet and network with other like-minded young women. Mount Sterling native Kaylee Compton learned about the SHE in Oncology opportunity because her sister took part in Markey’s ACTION Program, also directed by Vanderford. Through the program, Kaylee Compton met a fellow UK freshman and two other girls who were going into Morehead State University’s Craft Academy for Excellence in Science and Mathematics, which she had just graduated from.

“It’s a really good outreach program; it’s kind of gathered us all together,” said Compton. “I’m from Mount Sterling, so I didn’t know anybody going into the program. It’s been a really good opportunity for networking young women in science, specifically our underrepresented groups.”

Working with other young women and getting the chance to be mentored by women in science was another benefit of the program for many of the participants.

“I wanted to gain just a little bit more insight into the career path I’m looking at right now, meet professors and make connections with other people who have the same ambitions as I do,” said participant Emmeri Roberts, a native of Louisville. “Just being a woman, you have disadvantages, especially in careers in STEM. So just to have a community to start off — in my intro to a science field — is really important.”

“SHE is really important for young women,” Vanderford said. “Women are underrepresented in medicine and research, and we need diverse people and diverse ideas in research, education and oncology care. We really hope this program motivates these students to pursue cancer careers — that’s sort of the big, lofty goal.”

The SHE in Oncology program is open to students who identify as female in 10th through 12th grades in any Kentucky high school. The program aims to support young women who are underrepresented in the sciences, including teens of a racial or ethnic minority, from low-income households, living with a disability, or who are first-generation college-bound.

To learn more about UK’s SHE in Oncology program, contact Chris Prichard at cpr248@uky.edu. 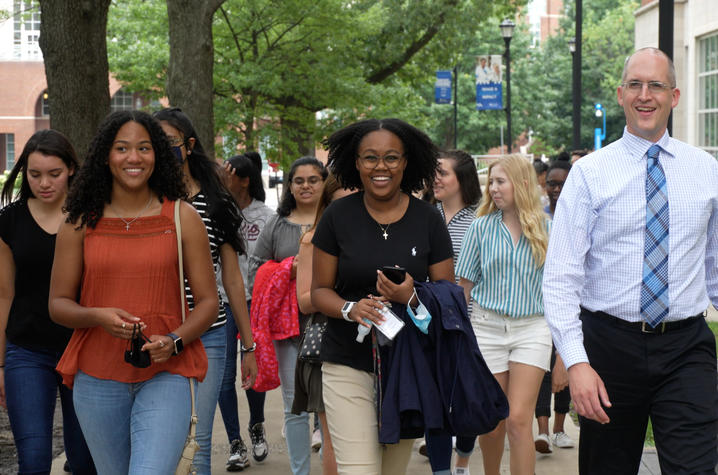 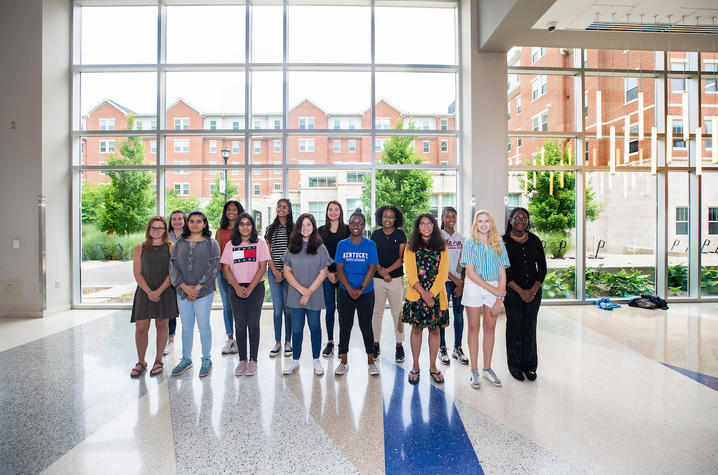