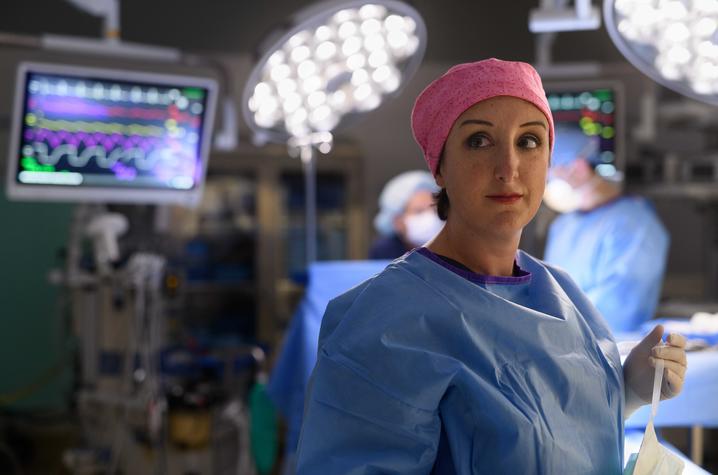 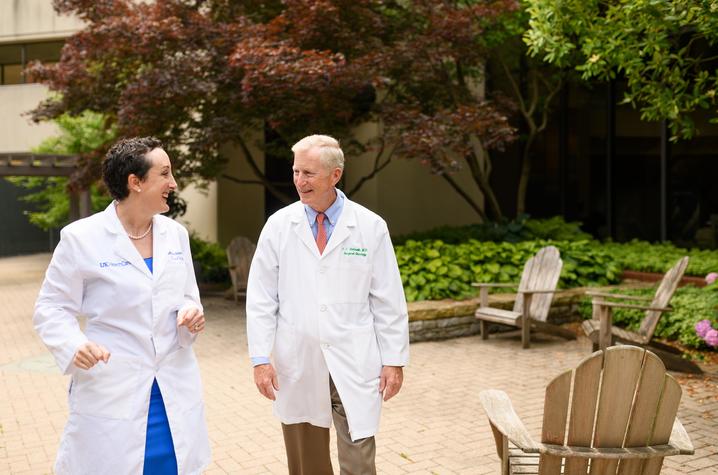 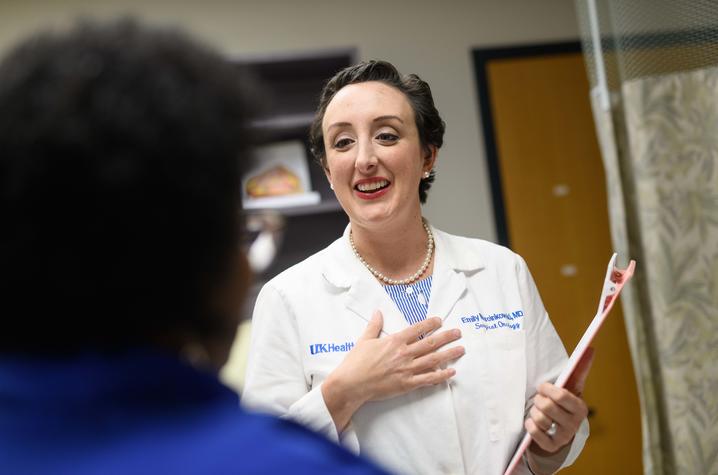 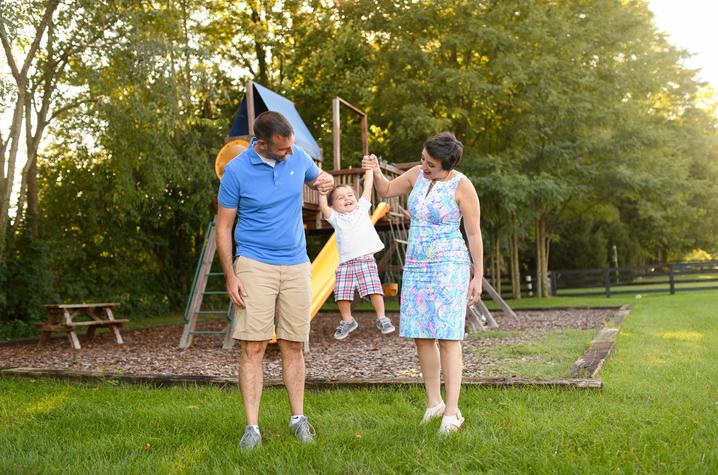 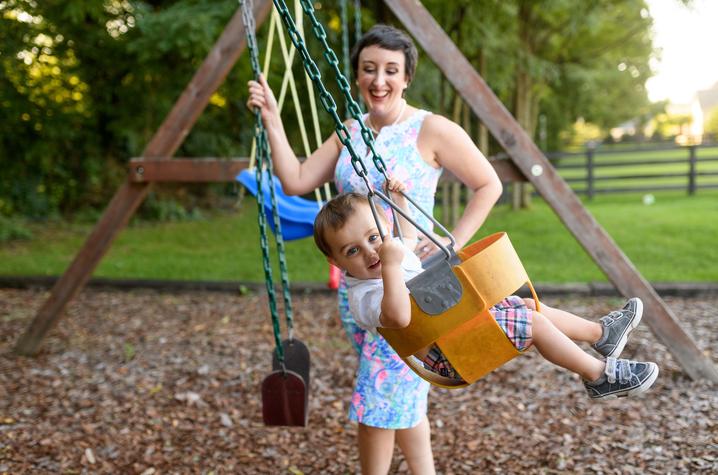 As the only child to a single mother who worked as an OR nurse, Emily often tagged along to the hospital during her mom’s shift. It was there, she says, where she first became fascinated with medicine.

By the time she was 10, Emily had already chosen her career path: she wanted to be a surgeon. After completing medical school and residency training in general surgery, she zeroed in on her goal even further: surgical oncology.

“In residency, we did a lot of surgical oncology,” Emily said. “I learned that surgeons aren’t just people who swoop in, save the day, and never see their patients again. I loved being able to walk alongside patients. You really become part of their lives.”

During her five years of general surgery training, she led a National Institutes of Health-funded study on triple negative breast cancer that ultimately produced a drug that targets a pathway in that aggressive, deadly disease. She followed that training with a two-year fellowship in complex surgical oncology, finishing up on June 30, 2016 – a date she jokingly refers to as “graduating the 29th grade.”

Ready to start her career as a breast surgical oncologist, Emily and her husband, Tim, began figuring out where they wanted to start the new chapter in their lives. Lexington’s location was an advantage, by virtue of its proximity to their respective families, but Emily says the University of Kentucky Markey Cancer Center’s National Cancer Institute (NCI) designation was an attractive selling point to her: the type of cancer center where she would be able to offer the best possible care with the most options and novel therapies.

She chose Markey and began her UK career in July 2016.

And life happened: after a successful first year at UK, Emily discovered she was pregnant. On Feb. 2, 2018, she gave birth to a healthy baby boy named Henry. Nearing the end of her maternity leave, she prepared to return to UK and her surgical career.

And then, life happened again.

April 24, 2018:  With just under a week to go until she returned to the world of scrubs and scalpels, Emily practiced what many multi-tasking new moms learn to master: pumping breast milk while driving. While waiting in the drive-thru line at Starbucks – where she ordered a “pink drink” because she’d heard rumors that it can help increase breast milk production – she detached her pump and noticed something unusual.

A lump. One that hadn’t been there before.

But the next day, the lump remained. She asked Tim to feel it, just to be reassured that she wasn’t imagining things. She knew that it was likely to be nothing – blocked ducts are common in breastfeeding moms – but couldn’t shake her concern. Just two years prior, her best friend had encountered the same problem. And Emily had been the one to diagnose this friend with breast cancer.

She came back to Markey – this time as a patient, not a physician. After an ultrasound and a biopsy, she had her answer.

“I'm not a radiologist,” she said. “But I've looked at enough ultrasounds to know what I was looking at."

Emily had spent years surrounding herself with breast cancer, training to help other women fight the very disease she now faced, and she hated “being a statistic.” Nevertheless, the experience was giving her new insight for her career.

“I’ve always looked up to my patients,” she said, noting that they undergo sometimes exhausting and painful physical treatments, but continue to come back to their appointments for more… even when “we literally make you feel your worst.”

But faced with her own life-changing diagnosis, she understood.

“I remember being excited to get the chemo,” she said. “I was nervous about the potential side effects, but excited to kill some cancer. So I get it now why patients keep showing up.”

She underwent six cycles of chemotherapy at Markey, receiving her infusion once every three weeks. Toward the end of her first cycle, her hair began falling out. As a physician, she had previously counseled patients to try not to worry much about their hair loss as a way to reassure them. She no longer makes the same mistake.

“I used to say, ‘It’s just hair, it will grow back,’” she said. “No. It’s part of your identity. Breast cancer takes away two major parts of our identity as women – our breasts and our hair.”

After her second cycle of chemotherapy, she developed painful ulcers in her mouth and her platelet levels dropped. She began receiving blood transfusions to get her body healthy enough to continue receiving the medicine. She had wanted to continue working throughout her chemotherapy course, as many patients try to do, but the treatments left her drained.

After finishing her therapy, she was faced with choices for her surgery:  breast-conserving surgery or mastectomy? Reconstruction or not?

It was this exact thing – the ability to be able to give patients some options and autonomy toward their own care – that drew her to a career focusing on breast cancer surgery in the first place.

“I have often talked to my patients about how cancer takes away all your control,” she said. “But with breast cancer, patients have choices. I get to help them decide how they feel about their breasts. It’s truly personalized care for each patient, and I love that.”

After a whirlwind year of highs and lows, she celebrated some remarkable high notes: her scans show no evidence of disease, she was able to restart her career at Markey, and she and Tim celebrated Henry’s first birthday. She’s fully back into the swing of doing what she loves: helping women fight cancer and return to their livelihoods, just as she’s been able to do.

Her surgical skills aren’t the only talents she brings to UK. McGrath, who has been at UK for more than three decades, sees Emily as one of the next generation of leaders who will help take Markey to the next level.

“She’s knocking it out of the park,” he said. “She’s an outstanding teacher, surgeon and leader. She has a bright future.”

And though Emily has always considered herself empathetic when working with her patients, she’s now walked in their shoes and understands more fully the issues they face – things like fear and anger, the pain of a surgery drain, the relentless fatigue, and even the surreal feeling of looking in the mirror and not recognizing yourself anymore.

“I never want my patients to feel like a number or like they’re just another part of my day,” she said. “I want you to feel important. And I want you to know how much I care.”