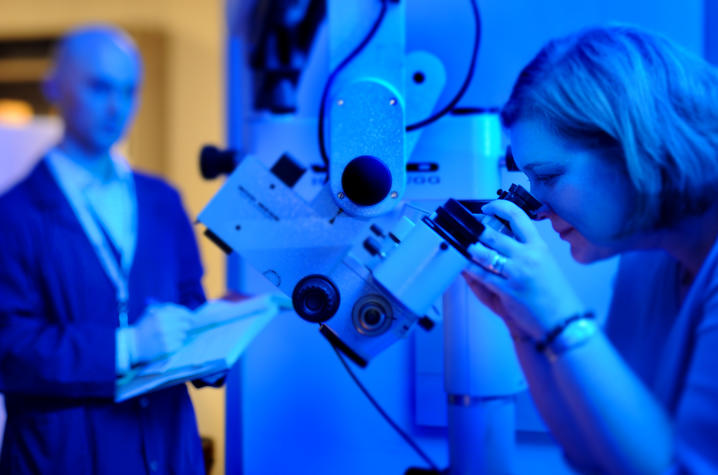 A recent survey found that almost 90 percent of American believe medical research is the key to finding cures for Alzheimer's and other diseases.

LEXINGTON, Ky. (Sept. 20, 2018) — A new survey released today finds that most U.S. adults (54 percent) are worried that they may develop Alzheimer’s disease, and a majority believe it is likely a cure will be developed in their lifetime (55 percent).

However, the survey, conducted online by Harris Poll among more than 1,000 U.S. adults, also revealed a disconnect between their belief and the role they could play in the solution. Eighty-nine percent of respondents were confident that the answer to tackling disease lies in medical research and 77 percent were willing to participate. However, 67 percent had no idea how to get involved in medical research.

The survey was co-sponsored by Banner Alzheimer’s Institute (BAI) in Phoenix, AZ, and pharmaceutical companies Novartis and Amgen, in association with Alzheimer’s Disease International.

“The results from this survey demonstrate the need to raise awareness about clinical studies,” said Dr. Pierre N. Tariot, director of BAI and co-director of the Alzheimer’s Prevention Initiative (API). “Aside from funding, the greatest challenge in finding a way to treat, slow, or prevent Alzheimer’s is the recruitment and retention of study participants. Scientists are making great progress in our efforts to find a way to end Alzheimer’s, but an estimated 80% of studies fail to meet recruitment goals on time, which delays critically important research.”

"Sanders-Brown is currently participating in more than a dozen clinical studies related to Alzheimer's disease," she said. "Slow enrollment is a costly and common obstacle that undermines medical research both nationally and here in Kentucky. Given the tremendous economic and social burden Alzheimer's places on patients and their caregivers, it's critical that we find ways to encourage more people to volunteer to advance scientific discovery."

BAI, Novartis, and Amgen are sponsors of the API’s Generation Program, which is evaluating investigational treatments to help prevent or delay the onset of Alzheimer’s. Sanders-Brown is one ofabout 75 study sites nationwide. The API Generation Program is the first to incorporate both genetic testing (through GeneMatch) and counseling into the study screening process.

The program is enrolling volunteers aged 60-75 who are at higher risk of developing Alzheimer’s but do not currently have or show signs of the disease.

Information about clinical trials is widely available online and from local patient advocacy groups. Details of Alzheimer’s clinical studies can be found on the Alzheimer’s Prevention Registry

Alzheimer’s is the leading cause of dementia and affects 5.7 million Americans. This number is projected to increase to nearly 14 million by 2050. September 2018 marks the 7th World Alzheimer's Month and aims to raise awareness for the need of increased funding for and participation in medical research.

The survey was conducted online by The Harris Poll on behalf of Banner Alzheimer’s Institute, Novartis and Amgen, among 1,010 adults 18+ living in the U.S. The survey was conducted between July 25 and Aug. 21, 2018. Figures for age by gender, income, education, race/ethnicity, region, size of household, marital status, and employment status were weighted where necessary to bring them into line with their actual proportions in the population. The U.S. survey was a part of the larger global survey about Alzheimer’s disease, including 10,000 people across 10 countries. The U.S. findings were consistent with global results.

Banner Alzheimer’s Institute (BAI)is a nonprofit organization dedicated to the goal of ending Alzheimer’s disease without losing another generation. It is helping to launch a new era of Alzheimer’s research—detection, treatment and prevention at the pre-symptomatic stage—and to establish a comprehensive model of care that can be the national standard. BAI was founded in 2006 by Phoenix-based Banner Health, one of the country’s largest nonprofit healthcare systems. For more information, go to www.banneralz.org.

The Alzheimer’s Prevention Initiative (API)is an international collaborative formed to launch a new era of Alzheimer’s prevention research. Led by the Banner Alzheimer’s Institute, the API will conduct prevention trials in cognitively healthy people at increased genetic risk for Alzheimer’s disease. It will continue to establish the brain imaging, biological and cognitive measurements needed to rapidly test promising prevention therapies and provide registries to support enrollment in future prevention trials. API is intended to provide the scientific means, accelerated approval pathway and enrollment resources needed to evaluate the range of promising Alzheimer’s prevention therapies and find ones that work without losing another generation.

About the UK Sanders-Brown Center on Aging

The UK Sanders-Brown Center on Aging is a national leader in efforts to improve the quality of life for the elderly through research and education. Major areas of focus of the Center are normal brain aging, stroke, and Alzheimer’s disease and related dementias. Sanders-Brown was involved in some of the most important discoveries related to Alzheimer's disease, including the discovery that Alzheimer's causes changes in the brain years before the outward manifestation of symptoms.

Most recently, in 2016, the Sanders-Brown Alzheimer's Disease Center was funded through 2021 by an $8.25 million, five-year grant from the National Institute on Aging, to continue and further research and clinical initiatives geared toward treating Alzheimer's disease.